In the first of the three-part series, we follow Alice and Bob all the way from Boston, Massachusetts, USA to Iceland's southeastern part.

After breakfast we boarded a bus to The Blue Lagoon, located between the airport and our hotel. Gray lava covered with moss drapes the countryside. We passed many volcanoes, though only one is active. The air temperature, 45F - 50F, contrasts with the 98F – 100F degree waters. Though the lagoon is man-made, it feels natural and is part of a beautiful setting.

We are very comfortable submerging ourselves for more than an hour though begin feeling dehydrated. The geothermal water has a unique composition, featuring three active ingredients – silica, algae & minerals. The blue color comes from the silica and the way it reflects sunlight. During summer there can also be a hint of green in the water. This is the result of the algae, which multiplies quickly when exposed to direct sunlight.

Alice in the Blue Lagoon with her complimentary silica mud mask.

Returning to Reykjavik, we walked to the waterfront enjoying views of the city with the varied ships here for the Festival of the Sea. Reykjavik reminds me of Bariloche, Argentina with its maritime setting. 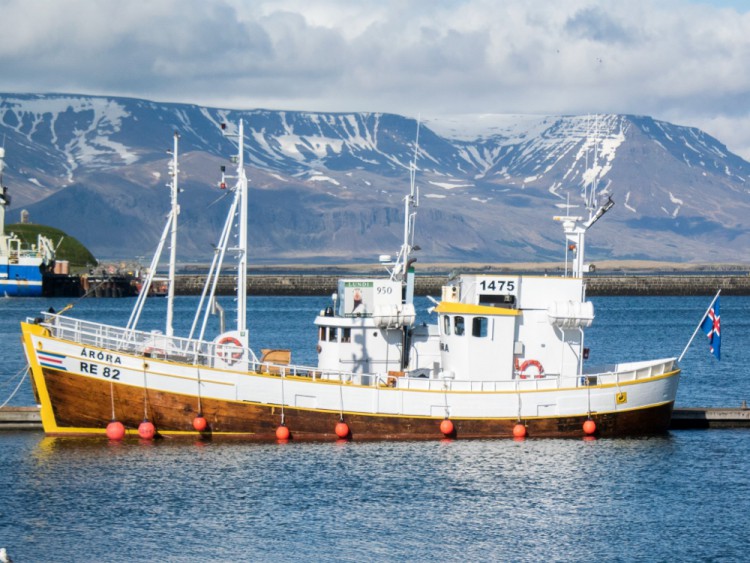 A ship at Reykjavik's old harbour, with Mt Esja seen in the distance.

The city is immaculate: most buildings are white, some with accents of bright colors. Because it is so cold, no one goes outside to litter or paint graffiti.  Though most have flat roofs and are simple box structures, some, like the Harpa Opera House, are geometrically designed architectural masterpieces. 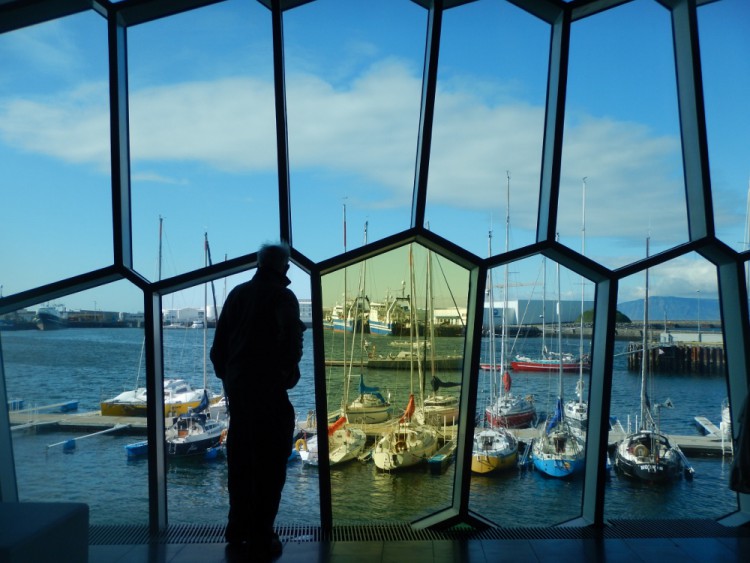 Bob as a silhouette in the Harpa concert hall with the old harbour seen through the windows.

Today we really explore Reykjavik. After breakfast I enjoyed the [Einar Jónsson] sculpture garden across the street from our hotel. While pointing to the sparse leaves on trees, a guide explained that climate change, not climate warming, is affecting the city in similar ways as it is affecting Boston. Normally, there is very little snow in Reykjavik and skiing in nearby mountains is a very short season. This past winter they had more than 40 snow storms and skied through April 17th. Winds were frequently around 120 km/hr, causing much damage.

Next to the gardens we admire the design of Hallgrímskirkja, a Lutheran parish church in Reykjavík. At 73 meters tall, it was designed with amazing Expressionist architecture made of white concrete and designed to look like an erupting volcano. The statue in front is of Leif Eiriksson, the Viking discoverer of America of whom they are quite proud.

Up Skólavörðustígur street to Hallgrímskirkja church. If ever you get lost in the city, look for the huge steeple!

Next we enjoyed a guided walking tour of Reykjavik, learning that crime here is almost nonexistent, and that Reykjavik and its suburbs have about ⅔ of the population of Iceland—which has 330,000 total people, almost all related to each other (and the Vikings) if you go back 4 or 5 generations. Other factoids: about 80% of the population are at least high school graduates, and Bill Clinton loved the hot dogs here.

Our real trip began today. Up early, we picked up our rental car, a 4-wheel-drive Nissan Pathfinder, and left Reykjavik. Amazing waterfalls, sheep everywhere (white, black, Longhorns) all playing and snuggling together, as well as cattle, horses, and birds in flat pastures beneath snow covered mountains and meandering rivers.

We took a short hike in stormy rain to our first waterfall at Þingvellir [National Park]. To dry off, we stopped for ice cream at a cattle farm, both a dairy and meat farm and a farm-to-restaurant concept. The cows are free to enter and leave the barn; it is a natural life for them. In the rain most chose the barn. One cow reminded me of the turtles in Hawaii—he was fascinated with my camera. I took his photo as he licked it, and later I licked my ice cream cone. Seemed fair. 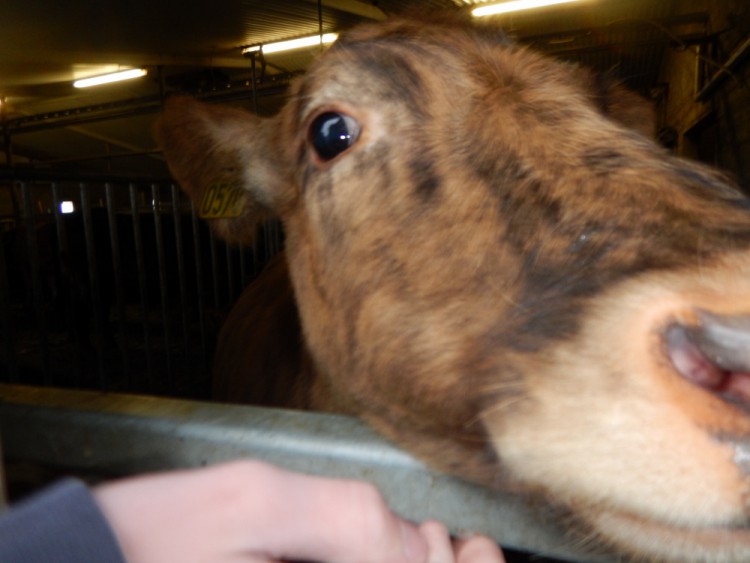 Great ice cream comes from happy Icelandic cows, like this friendly one at Efstidalur farm.

The next stop felt like Yellowstone. We were at the Strokkur geyser, which erupts every 5-10 minutes. It was one of several geysers at the Geysir geothermal area. That's not a misspelling but the derivation of our English word that comes from it. The entire area was smoky even under the heavy rain. I saw it erupt 3 times. The blue color comes from the lack of oxygen. 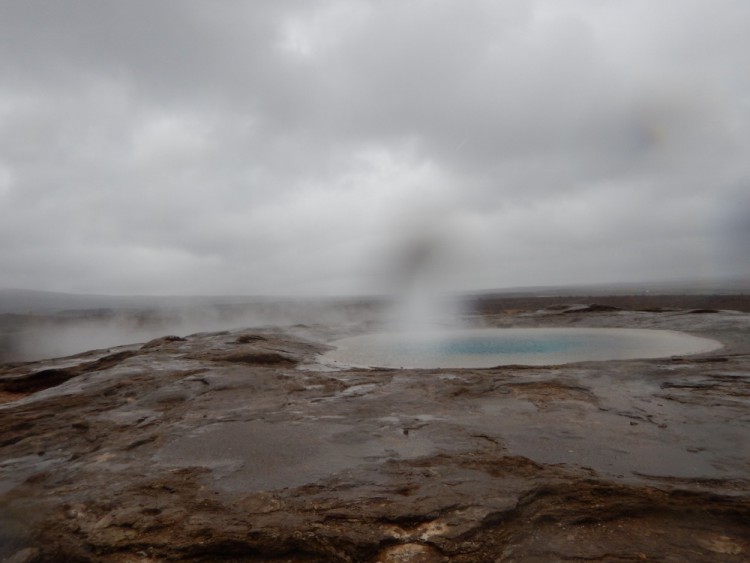 Strokkur geyser getting ready to blow at the Geysir geothermal area.

Further on, the Gullfoss waterfall really impressed us. It is larger than Niagara Falls and is the largest waterfall in Europe changing directions as it flows. Kerið, á 55 meter volcanic crater, was the final discovery for our day. If only it had been a swimming hole. Although the air temperature was in the 40's (F), it was very enticing.

The mighty Gullfoss ("Golden Falls") waterfall, a major highlight on the Golden Circle.

Fabulous day: no rain, gray sky but sunshine in parts and 59 degrees F! Volcanic rock covered with moss was everywhere, as well as goats, sheep, horses, swans, puffins, seagulls, planted trees, and flat plains. Eyjafjallajökull volcano was in the distance. Waterfalls, glaciers, lake! We took short hikes most of the day.

The Seljalandsfoss waterfall was big, wide, tall, powerful and beautiful. I felt the spray when I climbed behind it. Nearby, the Gljufrabúi waterfall was hidden behind its own canyon. Reaching it was a challenge as I had to walk across a stream balancing on rocks. Others hikers were really helpful. 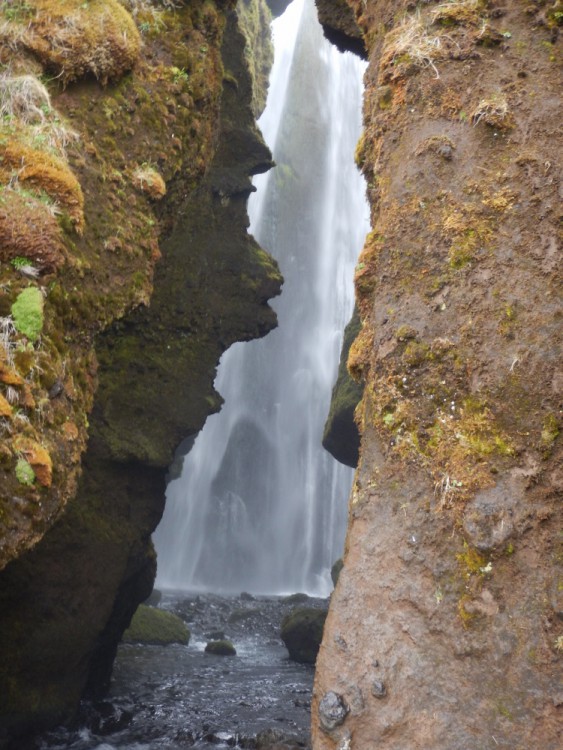 Gljúfrabúi waterfall, otherwise known as the "hidden falls" by Seljalandsfoss.

Skógafoss waterfall, even taller, was the next adventure. Climbing to the top meant many challenging stairs. Beyond the top was a narrow river, pasture, and mountains, all wonderful views.

Later, we explored the black sand beach south of Vik and the basalt rock formations of Dyrhólaey and Reynisdrangur. They were used as models for the [Harpa] Opera Center and the church in Reykjavik. 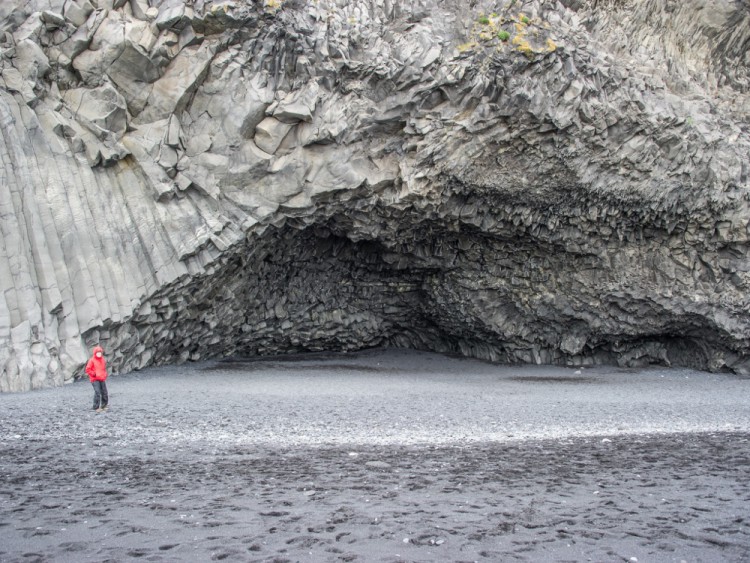 Alice at the natural acoustic cave hidden in the rocks at Reynisdrangur beach by Vík. Notice how big it is!

Most impressive were the canyons at the Fjaðárgljufur. The lava formations compare to nothing we have ever seen. 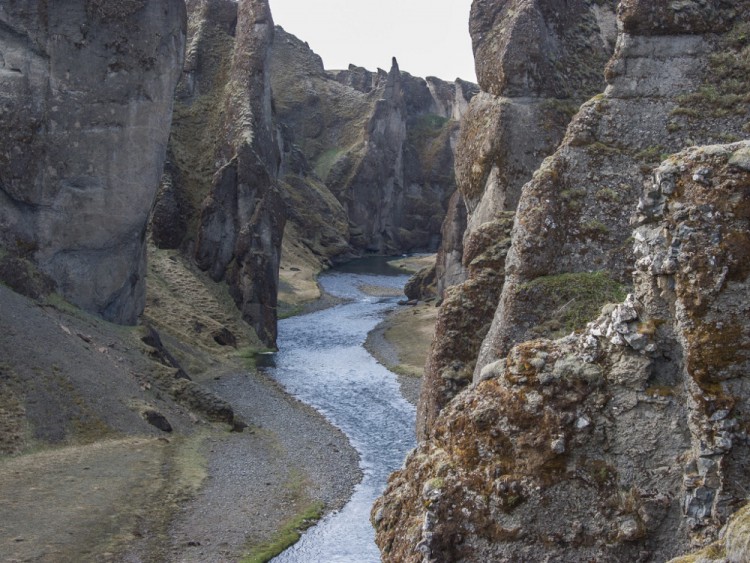 Two amazing days! Started with a good breakfast buffet at the hotel including waffle, fruit, and delicious coffee. I can't resist it here.

We took a guided glacier hike at Skaftafell. The guides were fabulous, very helpful and knowledgeable. We learned that:

Alice walking on the same glacier, Svínafellsjökull, as was used in scenes for the movie 'Interstellar'.

Watching ice float at the Jökulsárlón lagoon reminded us of Argentina. The glacier pieces begin in the mountain, are swept to the lagoon, and eventually melt in the ocean. We saw them by boat and by foot. It also reminded us of our trip to Colorado and Utah national parks, where we enjoyed naming rock formations. The beaches we saw have ocean polished stone, no shells. 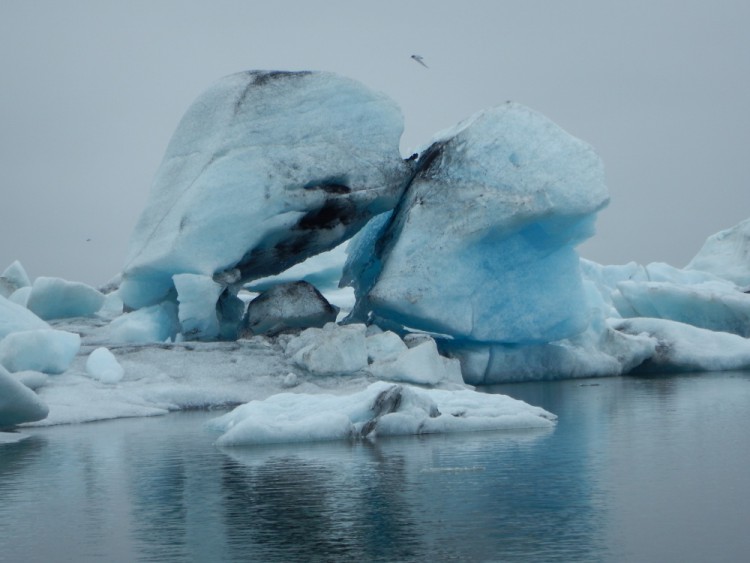 Bob is an amazing driver. He navigated a dirt road to get here. Walking on this is like tundra in Alaska. We saw our first reindeer in the distance.

In Höfn, a small fishing town, I bought a handmade sweater. I had yummy langoustine [small lobsters] at Humarhöfn restaurant. Bob has lamb again. The following evening we ate at another local favorite, Kaffi Hornid. I had lamb and Bob enjoyed beef at last. Great pottery!