6 Þorrablót Foods for the Culinarily Brave

Every culture has its own unique traditions and the foods specific to them. Sweden has its traditional Christmas julbord, the Chinese have a number of foods eaten to symbolize a prosperous New Year, and Americans have their traditional Thanksgiving turducken.

Iceland is no exception. Around Lent and Easter alone Shrove Monday is bolludagur (cream puff day), Shrove Tuesday is Sprengidagur (bursting day) where one is encouraged to stuff themselves with pea soup and salted meat, Ash Wednesday is Iceland's answer to Halloween with children dressed up and singing for candy at shops, and Easter is marked with the small nation chowing down on more than 700.000 candy-stuffed chocolate eggs! And if you've been in Iceland on the 23rd of December you'd have noticed the distinct aroma of fermented skate, which Icelanders boil and devour for Þórlaksmessa.

Then there's the entire month of Þorri, the fourth month in the Icelandic pagan calendar (running from mid-January through mid-February) marked annually with a Þorrablót, or a large feast. 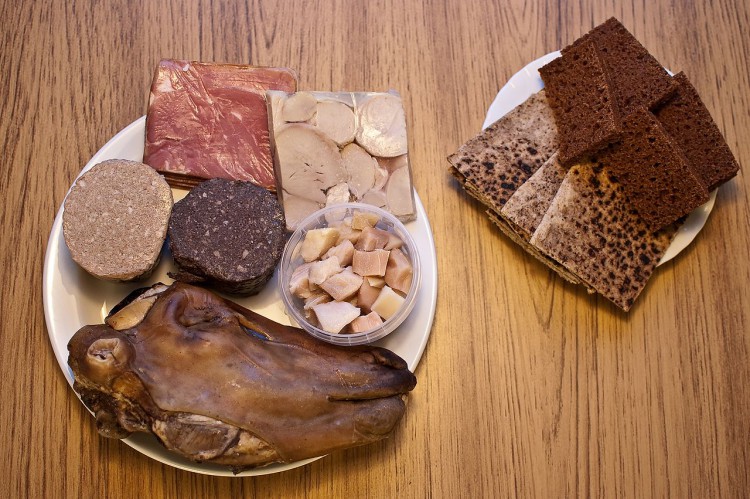 In post-World War II Iceland the Þorrablót tradition was resurrected in the form of Icelanders gathering together to mark Þorri by feasting on foods that were traditional in the Icelandic countryside but which were falling out of fashion by a population that was becoming more urban. Not that we can see why these foods, or "þorramatur," would be falling out of fashion... I mean, have a look for yourself at 6 foods that are a staple of every þorrablót:

OK, so "rotten" is a strong word. It prefers to be called "fermented." Hákarl is Greenlandic shark that is buried in a shallow, gravelly pit and left for 6-12 weeks under heavy rocks for all fluids to be drained out. The shark meat is then cut into slices and hung to... ferment... for roughly 7 months. Don't worry if you can't hold back your grimace or gag reflex upon tasting hákarl for the first time. There's good reason Icelanders chase their bites with shots of the strong spirit brennivin. 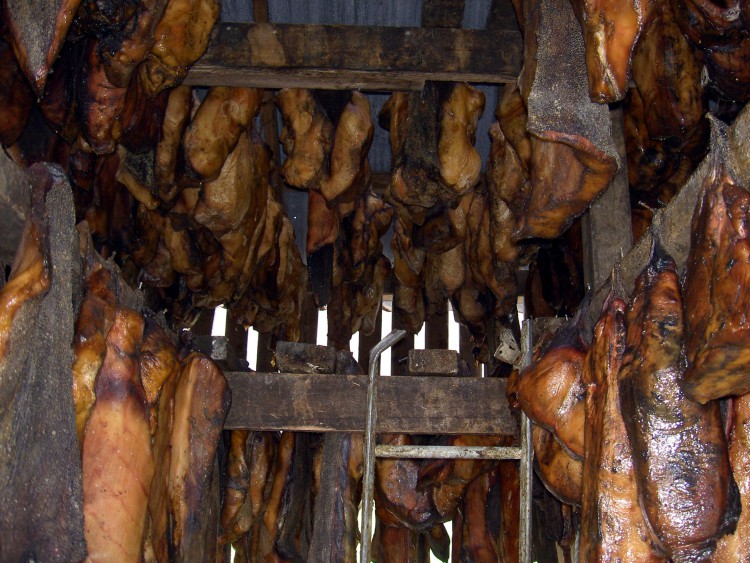 Shark hanging near the shark museum at Bjarnahöfn. The brown crust will be sliced away before the delicacy can be enjoyed. (source)

You can see for yourself how hákarl is traditionally prepared (and sample the goods) with a visit to the Bjarnarhöfn Shark Museum. 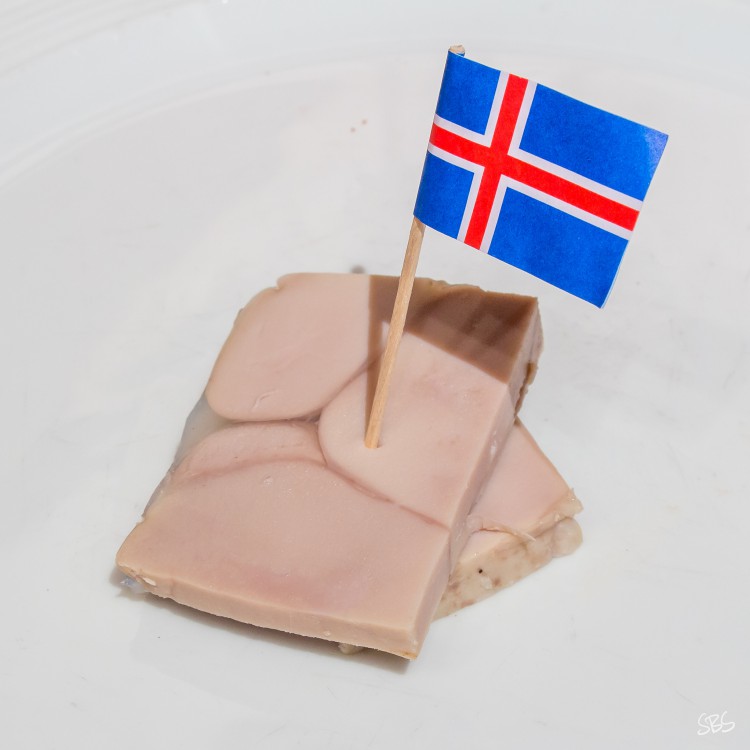 Svið is a delicacy that is eaten year-round by some and isn't much of an acquired taste once you move beyond the initial shock of seeing a seared sheep staring up at you from your plate. To prepare svið, the sheep's head is singed to remove all hair and well cleaned. It is then halved and boiled until cooked, but not so long that the meat has begun to fall off the bone -- presentation is everything in the culinary world, and seeing the singed profile of a sheep on the dinner table really makes the meal. The meat is very tasty, and Icelanders even eat the eyeballs. Pop!

Svið with a side of turnip and mashed potatoes. It'll put some hair on your chest. (source)

So there's svið, and then there's sviðasulta. "Sulta" means jam, so this is literally a jam or jelly made of svið. The meat from the sheep's head and the gelatin rich juices from the skull are all pressed together into a mold and then left to cool. The juices solidify into a jelly and you're left with a meaty head cheese to slice down and enjoy at your þorrablót feast. 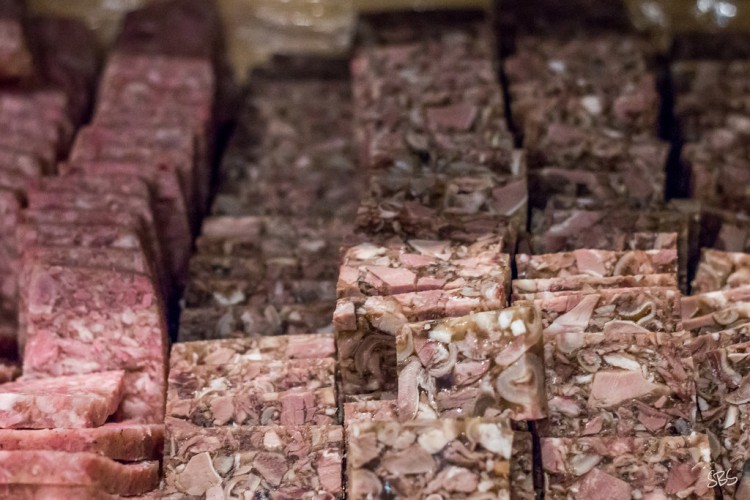 Sviðasulta ready for all to enjoy! (photo by Stefán Birgir Stefáns)

Scots would be familiar with the concept of lifrapylsa, as it's rather similar to haggis. The liver and fatty tissue of a lamb is ground down and kneaded together with rye flour and oats and then stuffed into the stomach lining, sewn shut and boiled to perfection. It's a þorrablót staple, and fairly popular at other times of the year, too. 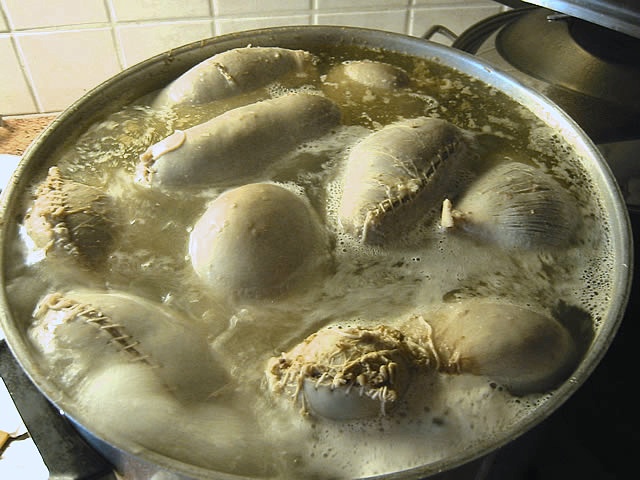 Blood sausage exists in many cultures, so this isn't something unique to the Icelandic Þorrablót, but is still worth a mention as it may come as a surprise to some visitors. It's the same concept as lifrapylsa, but the liver has been swapped out for lamb or sheep blood, giving blóðmör a dark, almost black colouring to it. The texture is course and the taste is... indescribable. 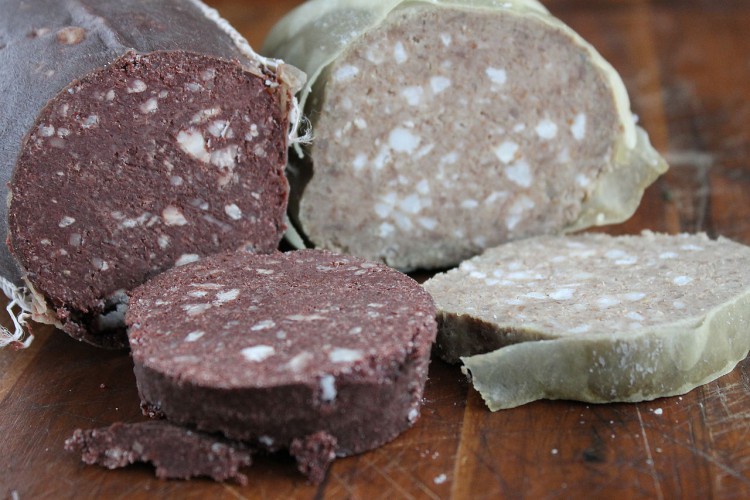 The darker slátur on the left is blóðmör, while the lighter sausage is lifrapylsa. (source)

A quick survey of the Icelanders in Nordic Visitor's web & marketing department saw slátur called "dogfood," "glorious!" and "unlike anything else I've ever tasted" all within a 10-second period. So you'll just have to try it for yourself.

Something for the slightly less daring...

If you do find yourself at a Þorrablót party and are a little timid with all the new delicacies around, fear not. Other staple foods at these gatherings are hangikjöt (hung and smoked lamb or sheep meat), harðfiskur (wind-dried fish... think fish jerky) and dark rye bread with creamy Icelandic butter-- it's sweet, filling and delicious! 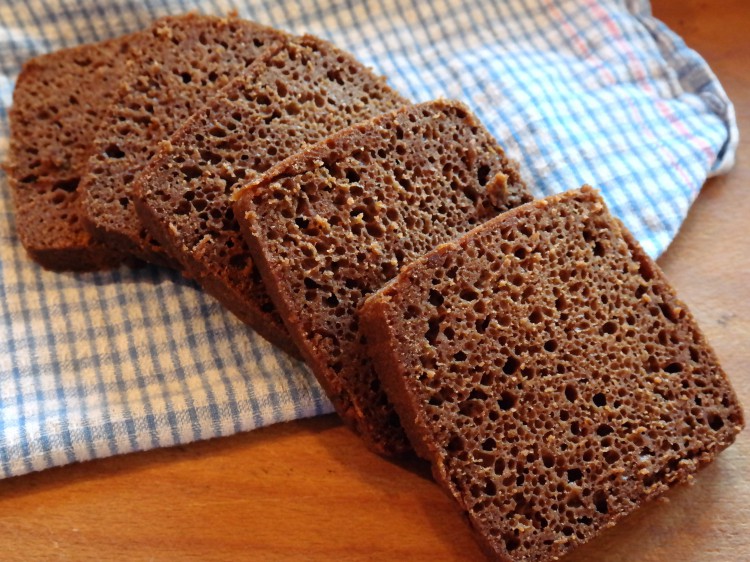 Delicious dark Icelandic rye bread is great... but don't eat too much (source - click through for a recipe)

Just remember that Icelanders have affectionately nicknamed their rye bread "þrumari" (thunder bread) on account of the gastric results of eating too much of it.

Just because you're in Iceland doesn't mean you have to try any of the foods listed above. We've got some incredible chefs and dining experiences to enjoy. Check out one of our culinary experience tours for yourself.

Have something else in mind? We're Iceland travel experts. Let us know what interests you and we can tailor an itinerary to your liking.

11 Weird and Unusual Things to do in Iceland