In the final part of the three-part series, we follow in Alice and Bob's footsteps as they complete their circumnavigation of Iceland via West Iceland.

We never even dreamed 50 years ago that we would spend our anniversary surrounded by the glaciers, green plains, sheep, fjords, horses, volcanoes, lava cliffs and bright sunshine of Iceland. Today we took the ferry over the Breiðafjörður Bay to Snæfellsnes Peninsula [from Brjánslækur in West Fjords to Stykkishólmur] as we begin our journey south. 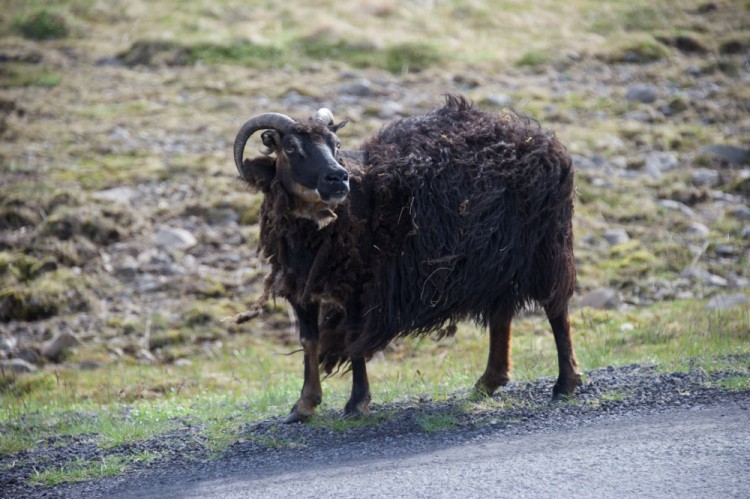 Another roadside attraction in western Iceland. 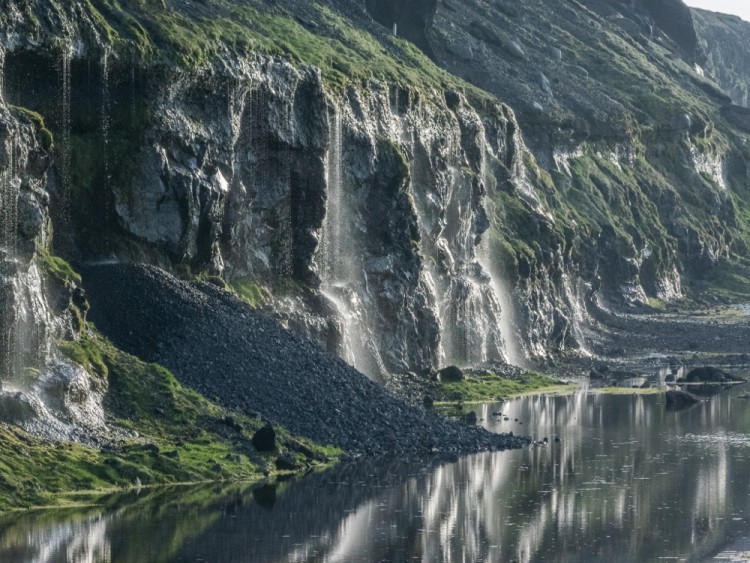 The steep seaside cliffs that make driving in the West Fjords a hair-raising (but scenic) experience.

We continued to celebrate our anniversary with a meal at the Hraun restaurant [in Ólafsvík], a local favorite. Bob had fillet mignonette with beer and I enjoyed two appetizers, lobster bisque and mussels with wine. After dinner we discovered more cliffs with terns.

Cliffs, ocean, small villages, caving, seabirds, and sheep: a beautiful sunny day! The Lóndrangar rocks on the Snæfellsnes Peninsula were beyond imagination and a lovely short hike to the sea. 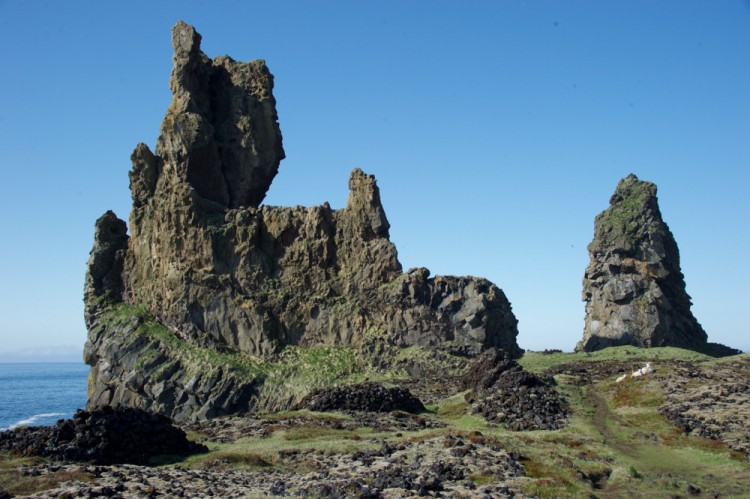 The Lóndrangar are a pair of 75 and 61 m tall basalt pinnacles, the eroded remains of an old volcanic crater.

On a day tour in the Vatnshellir lava caves nearby, the guide told fun folktales about trolls. Caves were beautiful with colorful lava, and we tasted delicious water collected in small pools. At Bjarnarhöfn we found massive lava formations as we hiked to the ocean. 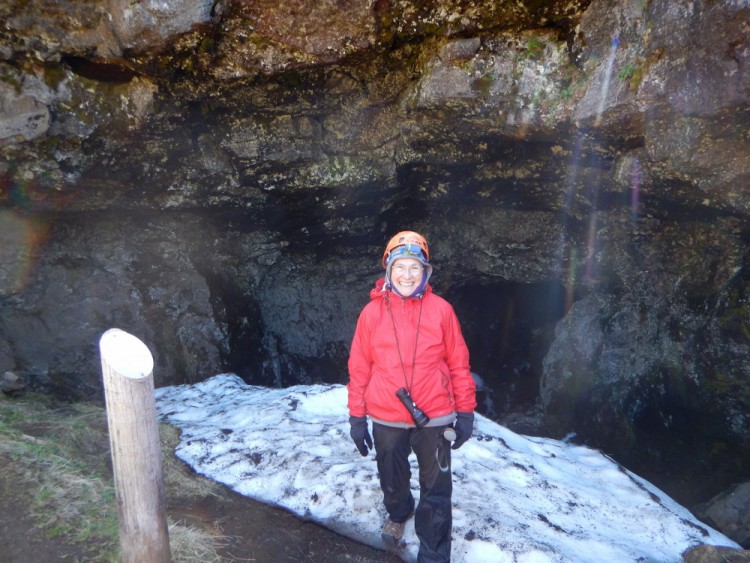 Alice in caving gear. Guided Vatnshellir tours go about 35 meters underground into the lava tube, which is roughly 8000 years old.

In the fishing village of Hellnar we enjoyed apple pie and chocolate cake in a small restaurant overlooking a sea cave where we sat at an outdoor table. At another fishing village, Arnarstapi, we watched birds flying and nesting in the cliffs. 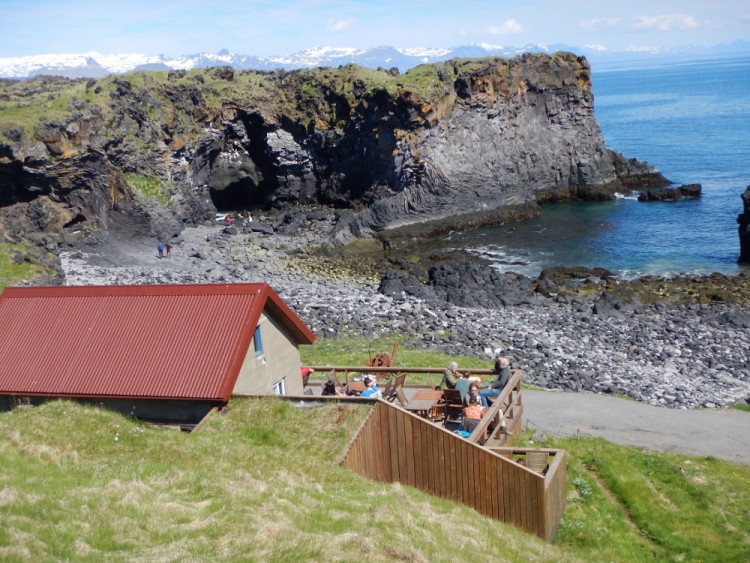 Got time for a coffee? You'll make time for this lovely view from the cafe at Hellnar.

By late afternoon the temperature hit 63 degrees F, the high for our trip. It felt wonderful! We drove for a while on route 574 seeing waterfalls, landslides, volcanoes, farms, glacier, and very colorful sandstone. Later we returned to the Hraun restaurant for dinner. We both had pizza. Mine was amazing with chunks of lobster, tiny shrimp, mussels, and tiny scallops.

We take a mystical ride through cloud-covered mountains, black volcanic rock, and covers of snow, lime green, tan, grass, and moss with waterfalls, sheep, fjords and flat planes along the way.

We stopped at the Settlement Center in Borgarnes, where we enjoyed a creative display of the Viking saga / settlement era of Iceland in the year 870. Hvalfjörður was our final fjord before arriving in Reykjavík.

The next day, we returned to Þingvellir [National Park] with a guide to snorkel in Silfra in between the North American and Eurasian tectonic plates. With a water temperature of 1 degree C we had to wear dry suits. Under them we wore long underwear: I had Polartec pants and shirt and a warm one piece "snowsuit". The guide had to literally dress us into the dry suit, a very painful process. Movement of arms and legs were extremely restricted. Bob's mask and my snorkel kept filling up with water. I drank too much though it tasted delicious. I felt like a first time snorkeler. I could barely swim. The views were beautiful but I needed the guide's help to complete the course to the end.

Back in Reykjavik we had a fabulous dinner at an Italian restaurant. I had seafood with spaghetti, calamari, tiny shrimp, lobster, and tiny mussels and Bob had lasagna. Our day ended on a high note. 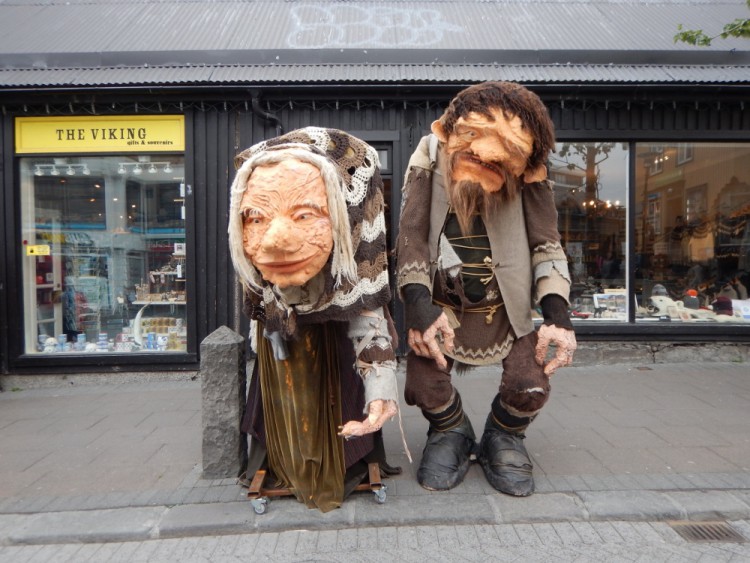 Probably the only trolls you'll meet in Iceland, on Laugavegur in Reykjavik.

Wednesday we flew to the Westman Islands, a short 20 minute hop in a small plane. Wow! 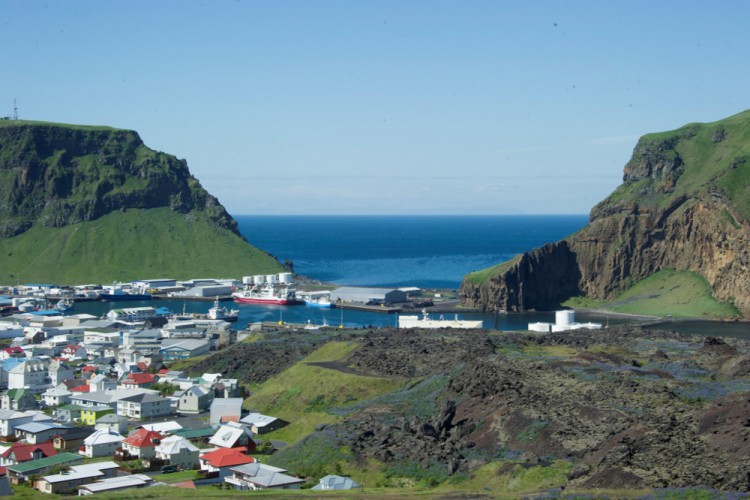 The islands are absolutely gorgeous: vivid colors, unique volcanic shapes, caves, cliffs, birds, sheep, stunning town and wonderful people—immaculate. We took a boat tour through the islands. A ride into a large cave was breathtaking, especially when our guide/captain played his baritone saxophone to demonstrate the amazing acoustics of the volcanic cave glistening with color. Later we took a bus tour hopping on and off to enjoy views and walks. For lunch I had delicious lamb soup with chunks of lamb, barley, and more. A fabulous day! 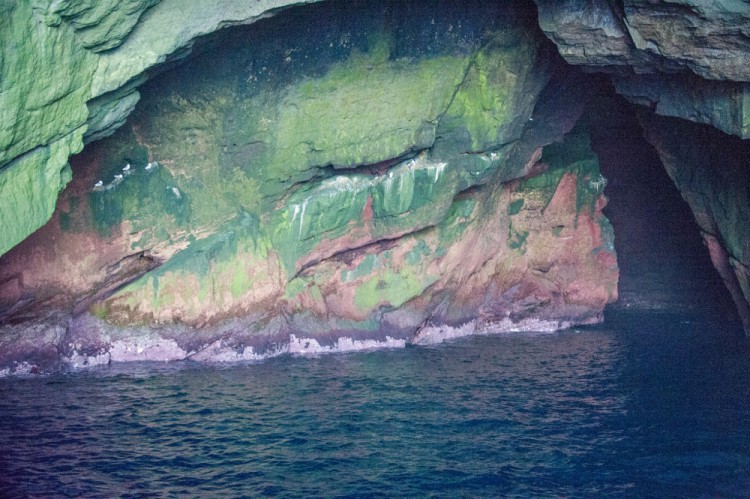 Iceland is the cleanest country we have ever seen. Young people are busy with summer jobs picking weeds and keeping the town immaculate. There is also time for fun!

Back in Reykjavík, for dinner we had hamburgers which are huge and come with tasty dressing, lettuce, tomato, and onion. Art is everywhere in the city.

Thursday was our last full day in Iceland. We had a bakery breakfast and Bob was in heaven with all the chocolate and donuts. Baking with fruit is very limited.

We spent a lot of time walking the streets, checking out stores and creative murals on buildings. Exhausted, we sat at a coffee shop and enjoyed a delicious salmon and spinach quiche for me and for Bob more pastry.

Our evening entertainment was wonderful, all at the [Harpa] Opera House (pictured in header image of this post), which in the sun was  amazing. First, we saw a hilarious one-man show, How To Become Icelandic In 60 Minutes, followed by a quick snack—open faced sandwiches and pastry—and then watched a blues concert overlooking the seaport. A wonderful last evening here.

Today we flew home from Keflavik Airport, scheduled to depart at 17:25 Iceland time arriving home at 19:40.

Are we glad we visited Iceland? Absolutely! Would we ever consider living here? NO! Much too cold in summer and too dark in winter! 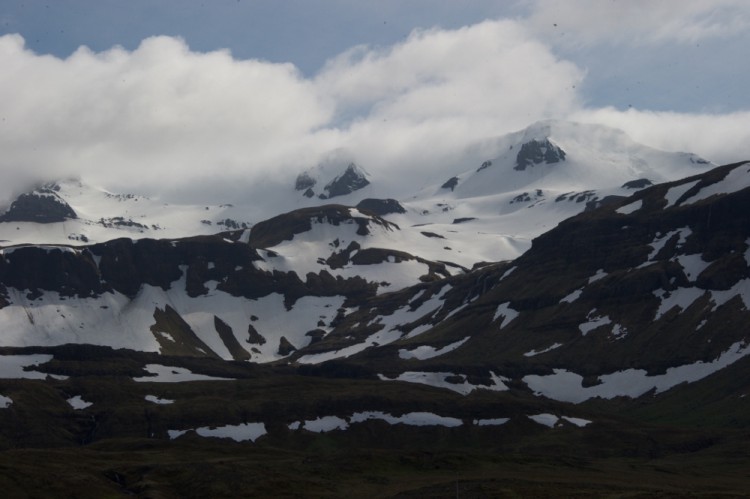 Snow even in summer...Iceland does live up to its name. (Snæfellsnes Peninsula)

The following are our random thought while brainstorming what we learned and felt about Iceland. They are in no particular order:

Catch up here with Part 1 - Reykjavik to Höfn and Part 2 - East to West.