In the second of this three-part series, we follow them as they spot wild reindeer, puffins, whales, seals and more from the East Fjords to the West Fjords.

With temperature in the 30's (F), we had a variety of heavy rain, snow, and beautiful blue sunny sky. They call this summer. In spite of the weather, the fjords are beautiful and when the sun is out the mountains are very colorful, in shades of grey, black brown, red, green and orange with volcanic rock, with glaciers and snow also in view. When the sun shines, rivers are azure. 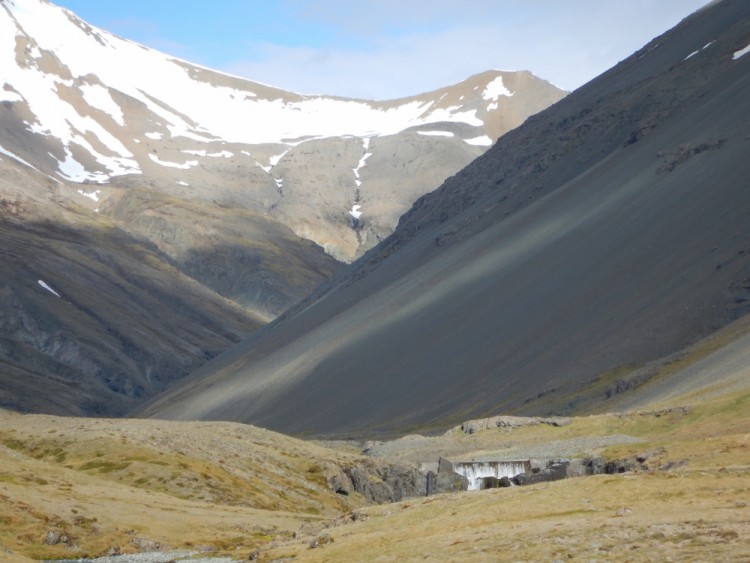 The roads are good, even the dirt ones, no potholes unlike Costa Rica. Mountain roads are windy, bridges are one lane as are some mountain tunnels but all have ample pullouts for cars to wait if another is coming at you. Snow and wind did prevent us from two excursions but there is so much to explore here it really doesn't matter. Bob handles the challenge well.

No day is complete without a waterfall, and still we found sheep continuously. Reindeer were easily visible this time. 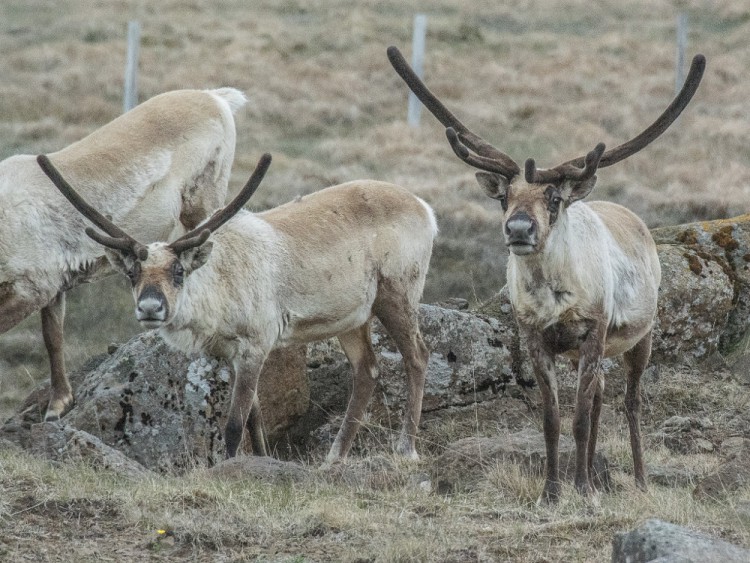 Wild herds of reindeer can be found roaming in East Iceland.

Other highlights today: Arctic char from fish farms along the fjords, a grass covered home in Fáskrúðsfjörður, puffins found outside of Bakkagerði in the Hafnarhölmi Harbor and mountain snow. 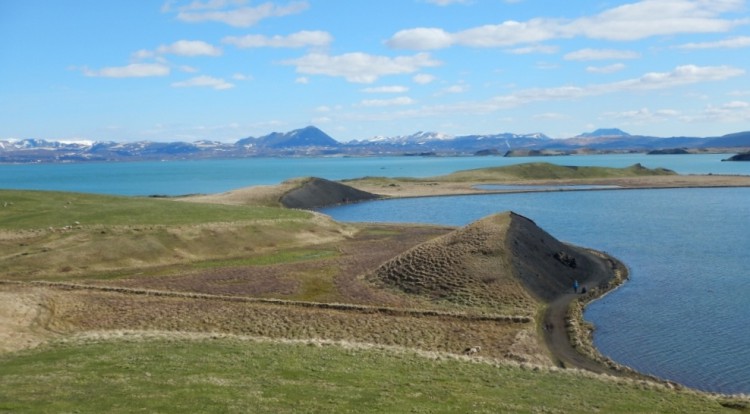 Icelandic Nobel award-winning author Halldór Laxness's book Independent People describes the desolation and harsh winters on the moorland of Jökuldalsheiði. The farm that inspired his book is now a tourist destination which we tried to visit on our way to Lake Mývatn. His descriptions more than matched this part of our journey. Five kilometers from the farm we saw a road closing sign. The physical surroundings are dismal and beyond isolation. We had strong winds, torrential rains, and saw a car with 4 flat tires. 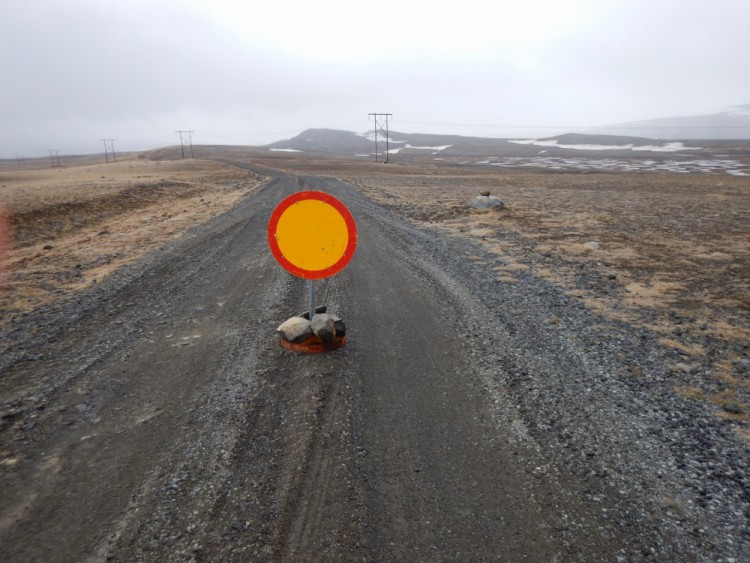 Some parts of Iceland are truly a "no man's land". Time to turn around the jeep when you see this...

Continuing our journey, we were close to Mývatn when we saw huge fields of smoke but no fire. Geysers were erupting! 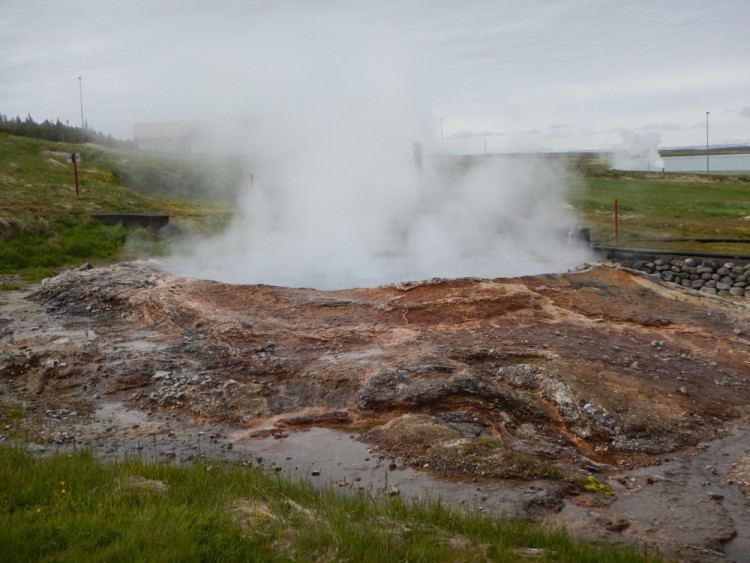 Steam springs, called fumaroles, can be seen in a few different areas around Mývatn. Be ready for a strong sulphur smell!

We also climbed a volcano to see its crater and saw unusual lava formations at Dimmuborgir! 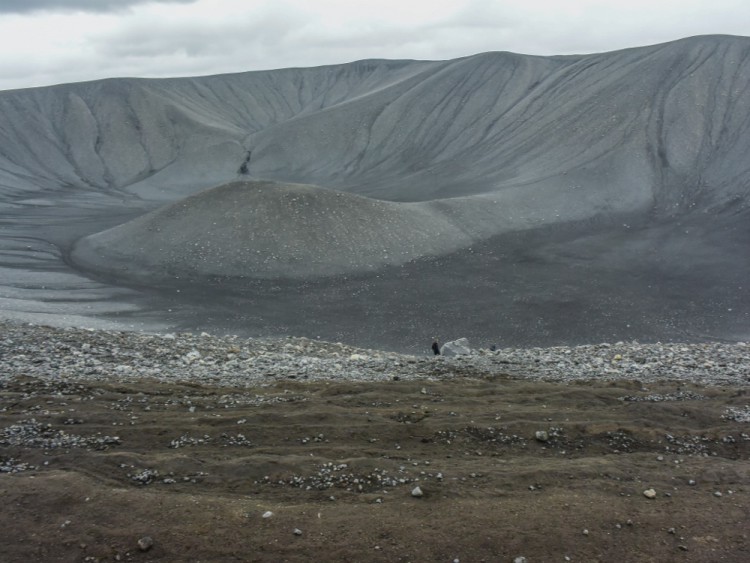 Plan to do some hiking in the Lake Mývatn area! Two paths lead up to the rim of Mt Hverfell.

Made a stop at Mývatn Nature Baths, where the water is heated to about 100 degrees F by geothermal steam from deep under the ground. 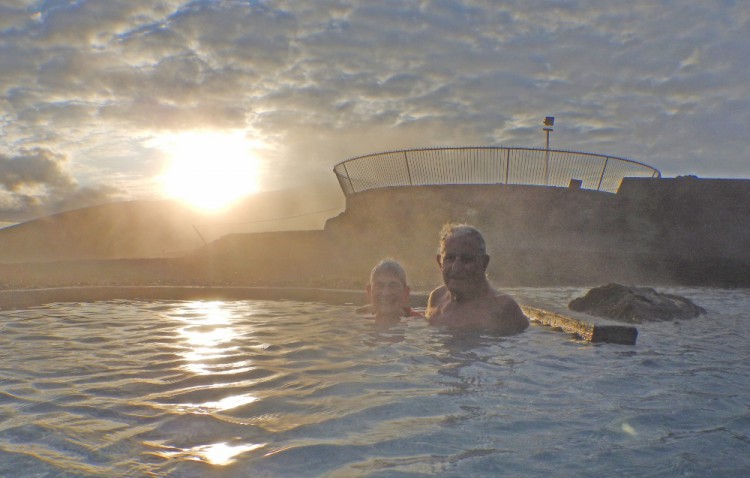 Alice and Bob in the geothermal waters of Mývatn Nature Baths. Great place to enjoy a sunset!

Then there was Goðafoss, “waterfall of the gods”, where pagan chieftain Þorgeir Ljósvetningagoði, hurled his statues of Norse gods into the waterfall after embracing Christianity in 1000 AD. 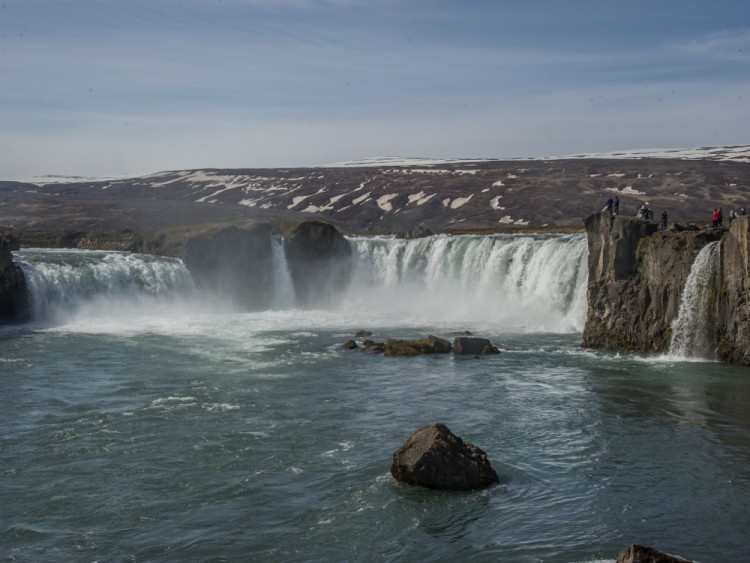 Goðafoss ("waterfall of the gods"), a must-visit attraction on the way to Akureyri.

Further on we enjoyed whale watching from Húsavík (that is the picture in the cover image of this post). This Great Blue Whale was easily visible without binoculars. Great Blues do not breach. 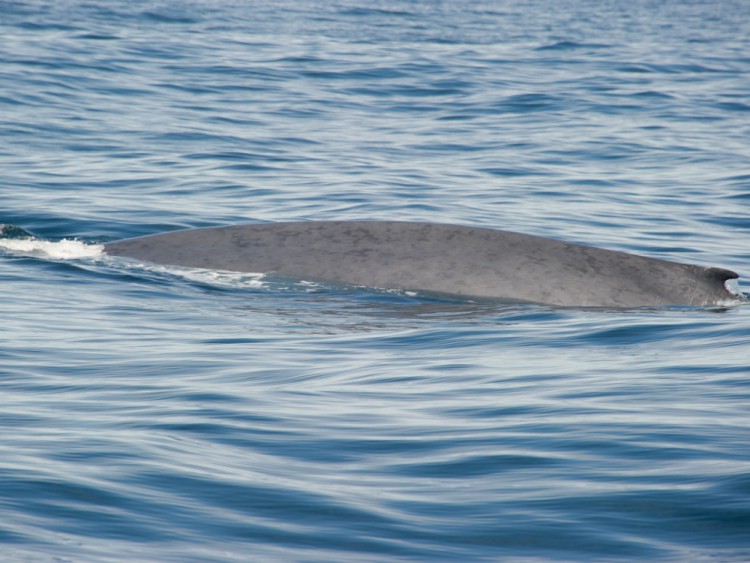 Spotted! A giant whale in its natural environment off the coast in Húsavík.

This day was a wonderful heat wave, sunny all day with temperatures of 42 - 48 F. We drove through desolate country all the way. We saw geothermal vents used for heating homes, greenhouses, and swimming pools. Snow covered glaciers, small towns (5-10 houses), sheep and cattle farms, grey lava were everywhere.

The day’s other highlights: 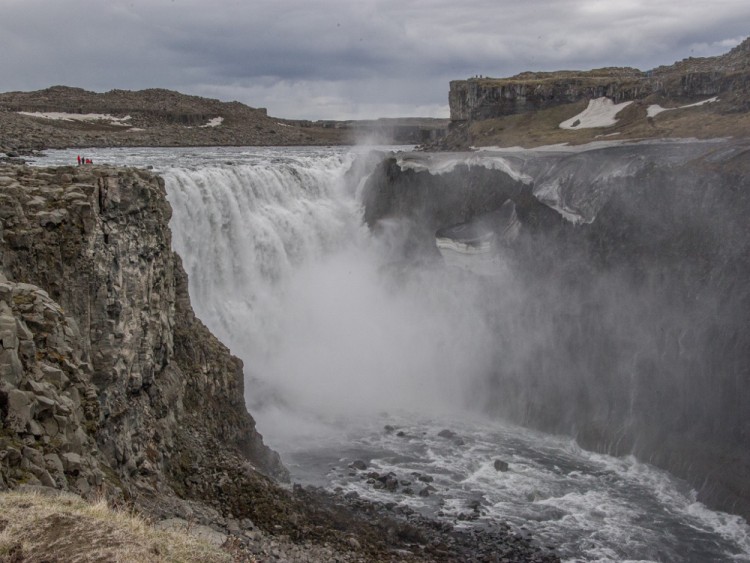 Dettifoss, the most powerful waterfall in Europe. The roaring sound is unforgettable.

The temperature hit 60 F today! No need for long underwear. We spent most of the day driving along the ocean finding seals off Illugastaðir. 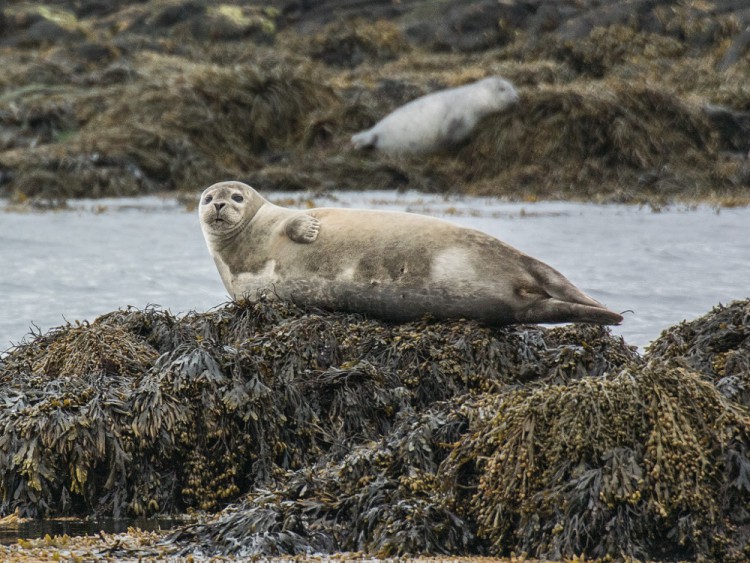 Taking it easy! Visiting around low tide offers the best chance of spotting seals on the rocks.

Saw more volcanoes, mountains, sheep, and horses along the way. We are geographically close to Greenland. At Borgarvirki, we found a natural fortress resulting from a volcanic plug, it reminded me of Massada and was actually once used for defense. 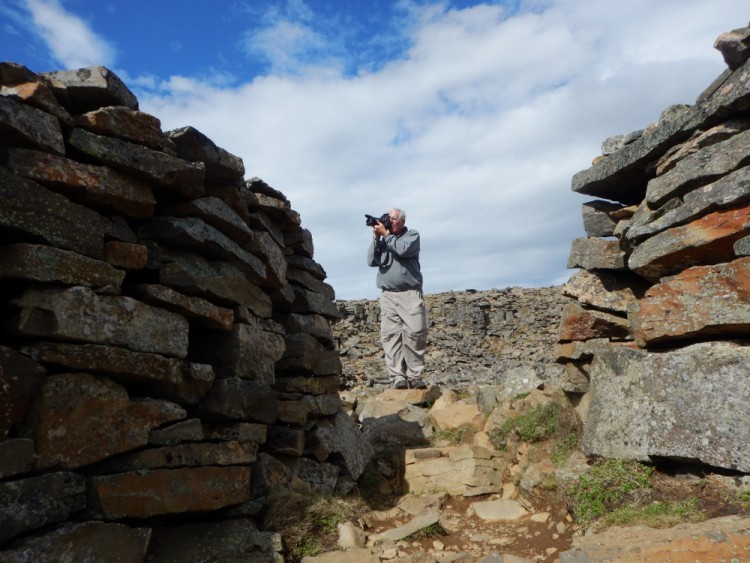 Here's Bob adding to the 4000 photos from this trip at the Borgarvirki natural fortress.

Two fabulous days in the area of Ísafjörður, the largest city in the West Fjords with a population of 3000, on another beautiful fjord.

It was sunny, 41 degrees F, as we drove along the top of an 1,800 foot mountain completely covered with snow, along with surreal uninhabited fjords, a few sheep, hay fields, waterfalls, and at last a small farm. Birds nest near the river. I found a small conch shell, the first of any we had seen. The western fjords are much narrower than the eastern ones. What looks like a short drive between two towns is greatly increased in length driving up and down the fjords, but so is the beauty.

An interesting aside: the directories of names here, whether the phone book or our tour company, are alphabetized by first name.

In Heydalur we enjoyed more seals, including one that practically breached like a whale. We saw more fluffy sheep and grass covered buildings. The drive included quick transitions from aqua waters to muddy streams, austere dark brown-black mountains to rich lime green and—happily—lots of sun.

We stopped at a small fox museum in Súðavík. Foxes are the only land animals that came to Iceland naturally. They crossed over ice from Greenland and are much smaller than foxes in Canada, an adaptation due to intense cold and scarcity of food for them.

We arrived in Ísafjörður in time for the Icelandic National Day celebration. A band led the people, some in traditional dress, in a parade from the town square to the town park nestled beneath a snow covered mountain. The band continued to play, a chorus sang, and there were several speeches. I thought it would be an opportunity to taste different local foods but instead they sold hot dogs and cotton candy. It was fun to see so many families with young children enjoying the festivities. 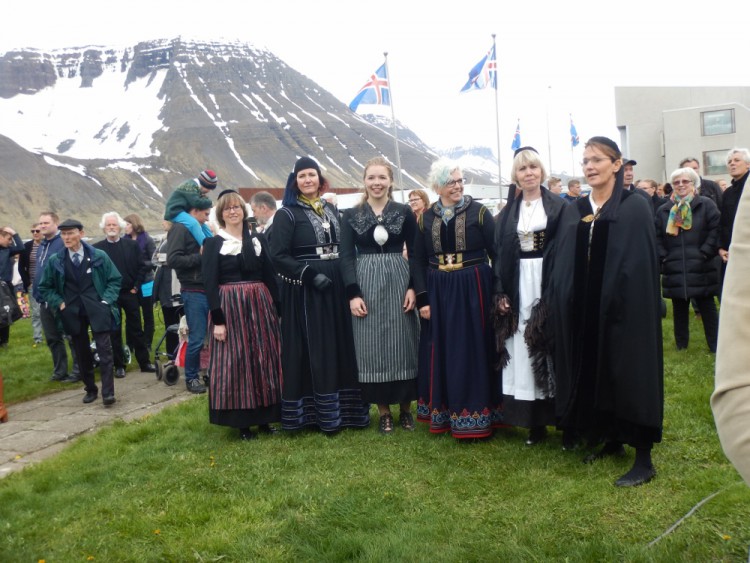 Later, we walked the streets enjoying brightly colored buildings and the waterfront before having dinner at a small restaurant with lots of locals. We both enjoyed steak. Fruit and veggies are all imported. It is too cold to grow them and so I treasure them when served.

The next morning I kayaked with a local guide, a young woman studying bio-engineering in Reykjavik. She is from Ísafjörður. It was wonderful to see the mountains from the water, paddling along fjords where there was little sign of people and many birds. 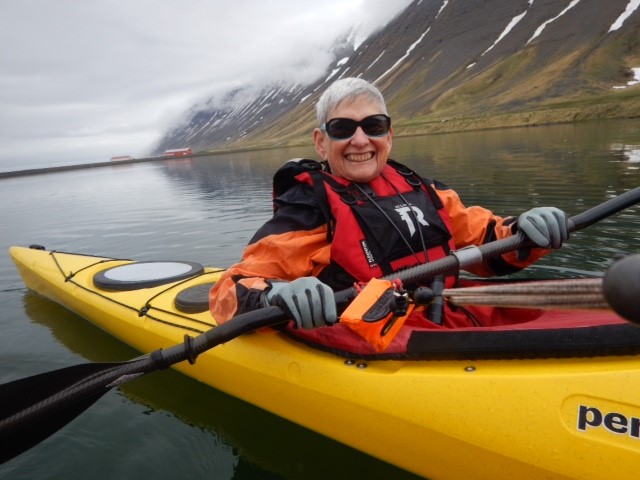 Alice paddling out in the fjord from Ísafjörður. It's easy to forget the physical work with scenery like that...

In the afternoon we went on a small motor-powered boat to Vigur Island, a tiny peaceful island 35 minutes away with puffins and eider ducks, where there is just a small farm inhabited by only one family. Strong cold winds prevailed. Birds nested. Lots of puffins, with personalities like penguins. We carried sticks to keep the Arctic terns from attacking us. The boat ride back was in rough ocean water with huge waves. 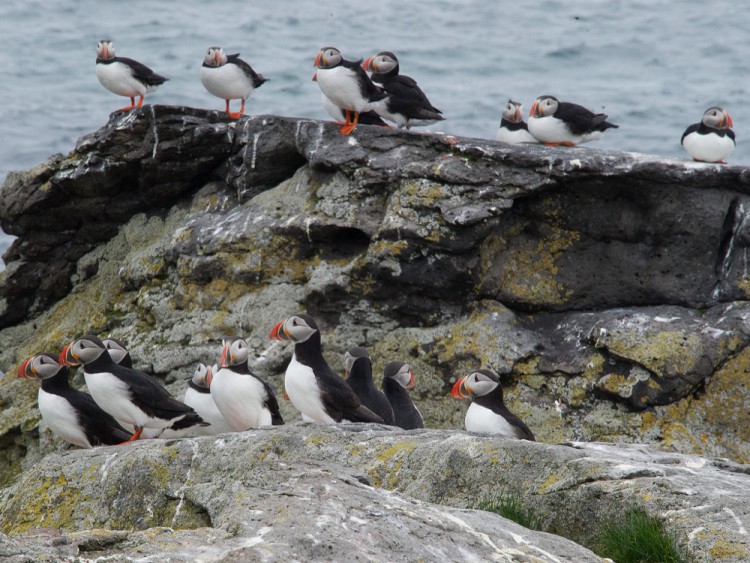 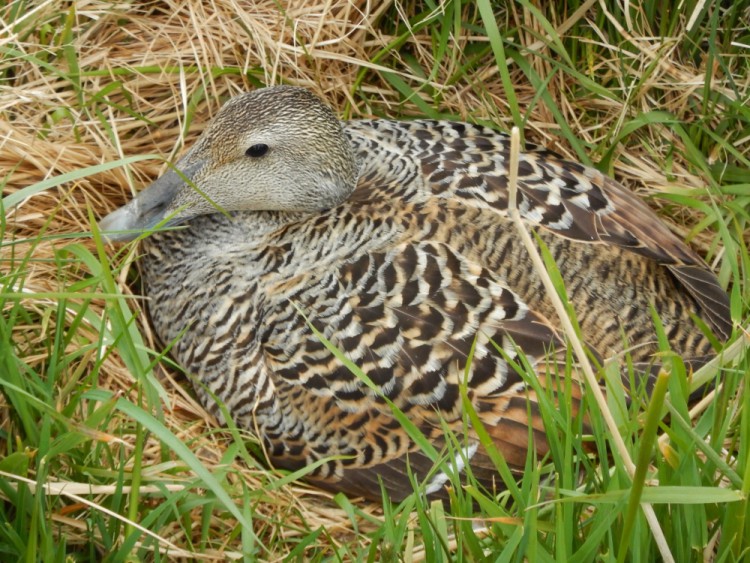 Did you have a comfortable night's sleep? You might have this eider duck to thank for the providing the soft, warm down.

Had breakfast at a fabulous bakery in Ísafjörður. Sunny, blue skies, good pastry, and 47 F. 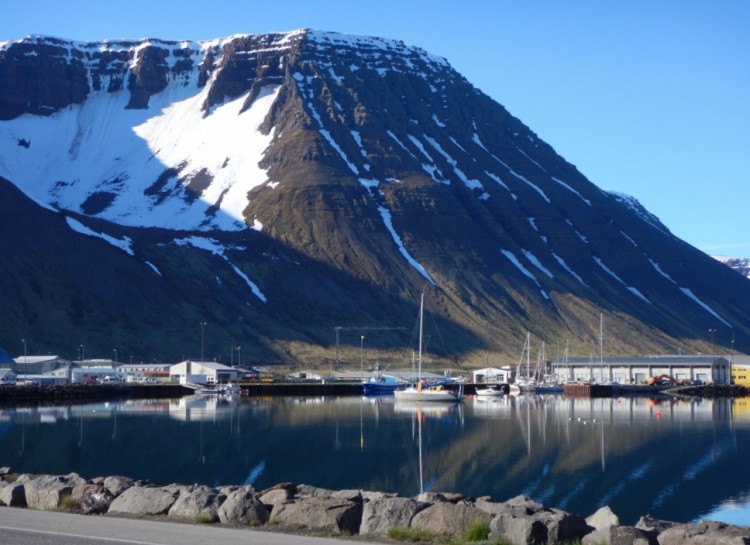 Not a bad way to start a day in the West Fjords.

Iceland has an amazing tunnel system; they work hard to keep roads in very good shape. We drove up and down tranquil fjords, mountains, narrow dirt (mostly mixed with lava pebbles) roads, looking up at snow bowls and down at rivers from more than 500 meters and wondering whether falling rocks or a fall from a cliff was worse.

The highlight of the day was the very impressive seven-tiered Dynjandi waterfall, which is 100 feet high. It was a nice hike past other waterfalls to its base. 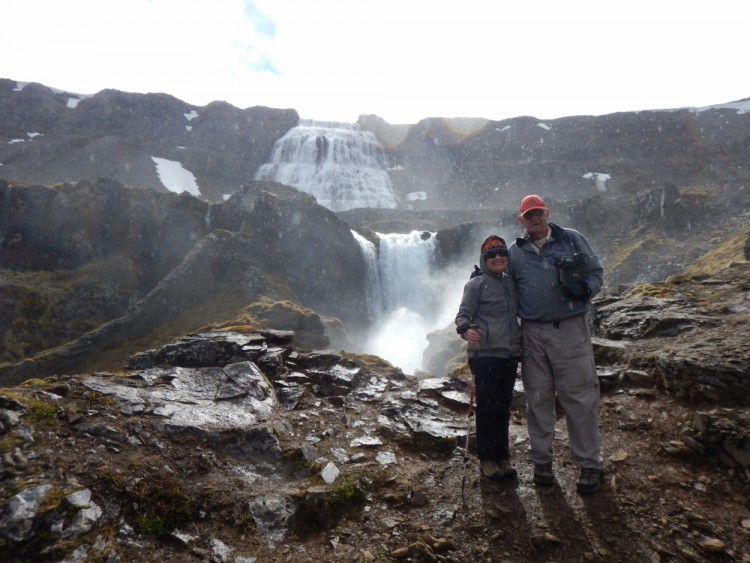 Alice and Bob hiking up along Dynjandi, the largest waterfall of the West Fjords region.

Later we had dinner with a couple from Belgium and then went to the Látrabjarg cliffs to see puffins.

Stay tuned for Part 3! Catch up here with Part 1 - Reykjavik to Höfn.

We tried it: Vatnshellir Cave

A Little Something About Easter in the Nordics