We tried it: Vatnshellir Cave

One sunny October afternoon, four Nordic Visitor colleagues — three eager travel consultants and the content writer authoring this post — pulled up to the side of Útnesvegur road, in the Snæfellsjökull National Park, and suddenly found themselves deep in an ancient lava tube...

This is We Tried It.

A map showing the three "rooms" making up the Vatnshellir cave. (Source: Environmental Agency of Iceland)

Okay, so it wasn't all as sudden as that. Between pulling our jeep up to the side of the road and standing in the deep, dark Vatnshellir cave, the expert guides responsible for bringing tours through the 8000-year-old lava tube outfitted all in our group with safety helmets and flashlights and primed the novice cavers with the knowledge needed to make it into and out of the cave in one piece.

The gist of it: Watch where you step. Oh, and don't touch anything. 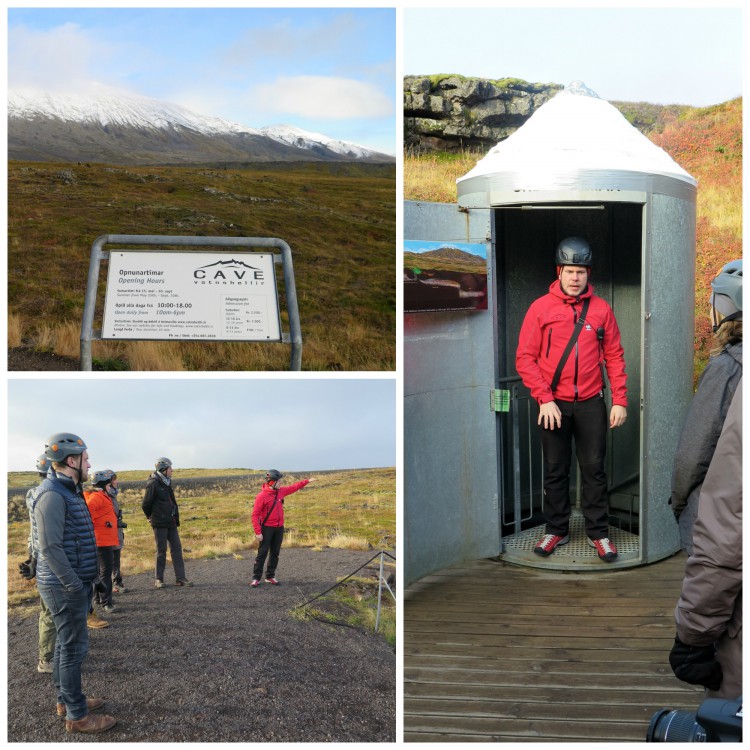 Above ground, Ægir shares some details about the save and how to safely explore it.

Just a 10-minute drive outside of the gorgeous seaside town Hellnar, the Vatnshellir cave is an exquisite lava tube formed during an eruption some 8000 years ago.

Our guide for this journey underground was Ægir Þór Þórsson, an experienced cave and mountain guide who, along with his father Þór, has been granted permission by the National Park to guide small groups into the cave, hourly during the summer months and thrice daily during autumn and winter. 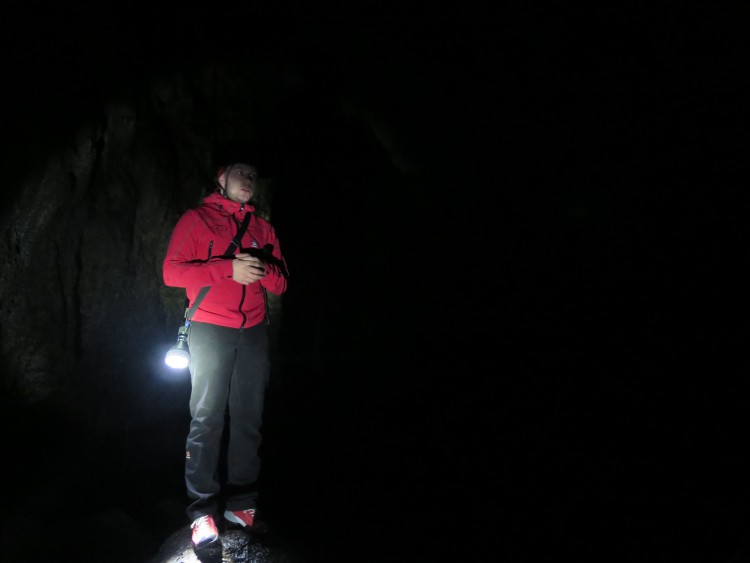 Ægir tells us there are hundreds of lava tubes throughout the Snæfellsnes peninsula alone.

Just a few metres from the roadside, a small metal silo marks our entrance point to the cave. Ægir stops at the entrance to the silo to tell us about Vatnshellir and show us a map of the three "rooms" we'll be exploring, totaling roughly 200 metres in length. In addition to priming us all on the importance of watching our footing — that beautiful lava rock is very sharp — Ægir also tells us to respect the cave. 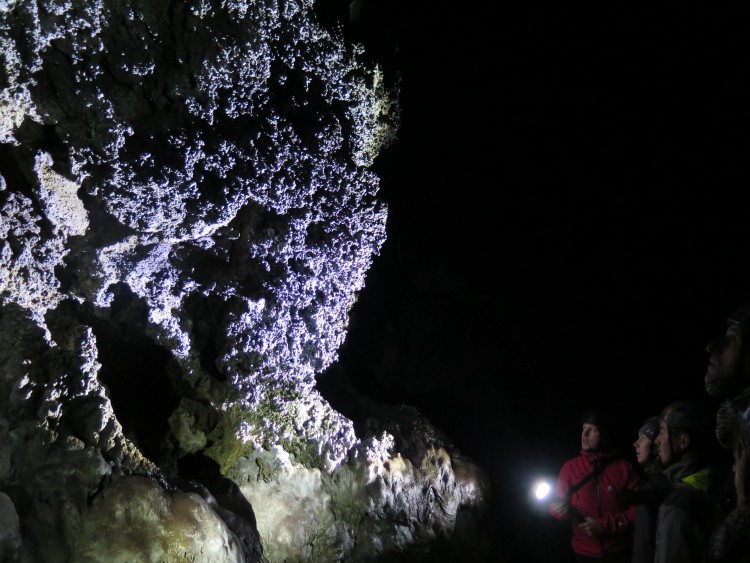 Inside the cave, Ægir highlights an example of "grape lava" so named because of its resemblance to bunches of grapes on the vine.

While a misplaced foot could result in a tumble and some cuts and scrapes for the caver, touching the various formations in the cave could damage the more delicate lava we'd be seeing. The cave was not long ago closed to the public for research and preservation purposes. Apparently it's a stunning example of the lifespan of a volcanic eruption, with various textures of hardened lava within the tube indicating the levels at which lava flowed through the tube all those millennia ago and how its composition changed over time. 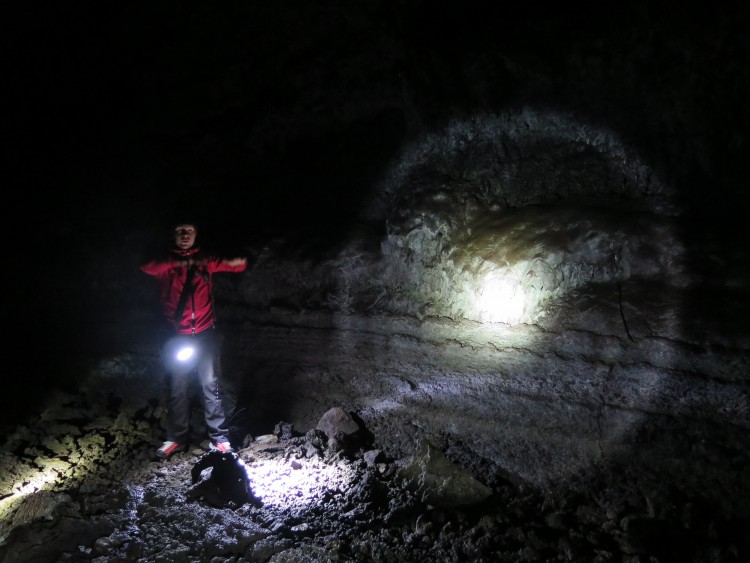 The group stops to see the walls marked with signs of where the lava flowed through this tube roughly 8000 years ago. Ægir likens the horizontal markings to what one would find on a dry creek bed.

At the deepest point of the cave — 200 metres into the lava tube and 35 metres underground — Ægir instructed the group to turn off their flashlights. Not a hint of light makes it this far into the cave, though the faint movement of the air can still be felt thanks to the porous nature of lava rock. Experiencing such complete darkness is worth the journey underground. It's a degree of isolation you're not likely experiencing on a regular basis. 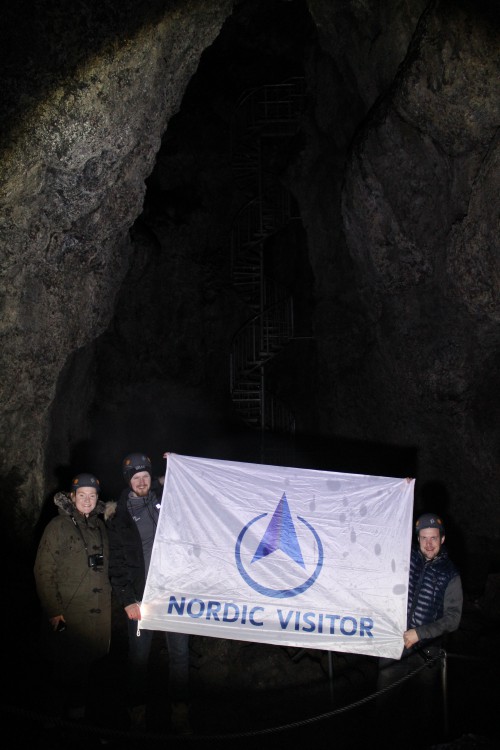 Catharine, Þór and Ævar stop for a quick photo op in the deepest point of Vatnshellir cave.

Ægir was a wealth of information throughout the 45-minute tour, sharing interesting facts about the cave and doing a good job of imprinting his own excitement about caving in Iceland. If you find yourself on the Snæfellsnes peninsula and don't suffer from a touch of claustrophobia, a journey into Vatnshellir is an unforgettable experience.

Are you interested in experiencing the Vatnshellir cave or other fascinating wonders of the Snæfellsnes peninsula for yourself? Nordic Visitor's team of explorers followed the route of the South & West in Detail travel package, but many of Nordic Visitor's self-drive tours in Iceland can be tweaked to include this day tour.

Have something else in mind? Drop us a line and a dedicated travel consultant will build an itinerary just for you.

Tags:
Iceland, We Tried It, Things to Do

My Iceland: Into the Glacier