By: Catharine
Last Updated: 16/11/2020
Posted in: Activity, Iceland, A little something about

When you travel to Iceland, you’ll soon find out that the colourful puffin is the country’s unofficial emblem. Attracting tourists to visiting centres, to towering bird cliffs and on sightseeing boat tours around the island, the Atlantic puffin has a magical draw.

Are you looking to learn more about this friendly looking bird? We’ve compiled some fun puffin facts so you know more about them when you come visit. Read on to discover more about their personalities, habits, as well as when and where to spot them in Iceland.

The puffin will probably remind you of the (completely unrelated) penguin. Their monotone plumage and petite wingspan are similarly built, but puffins are actually very capable fliers.

Since the puffin's wings are on the small size, these eager seabirds put in a lot of work to take flight, flapping their wings around 400 beats per minute. It all pays off in the end, as they can reach speeds up to 88 kilometres per hour (55 miles per hour). 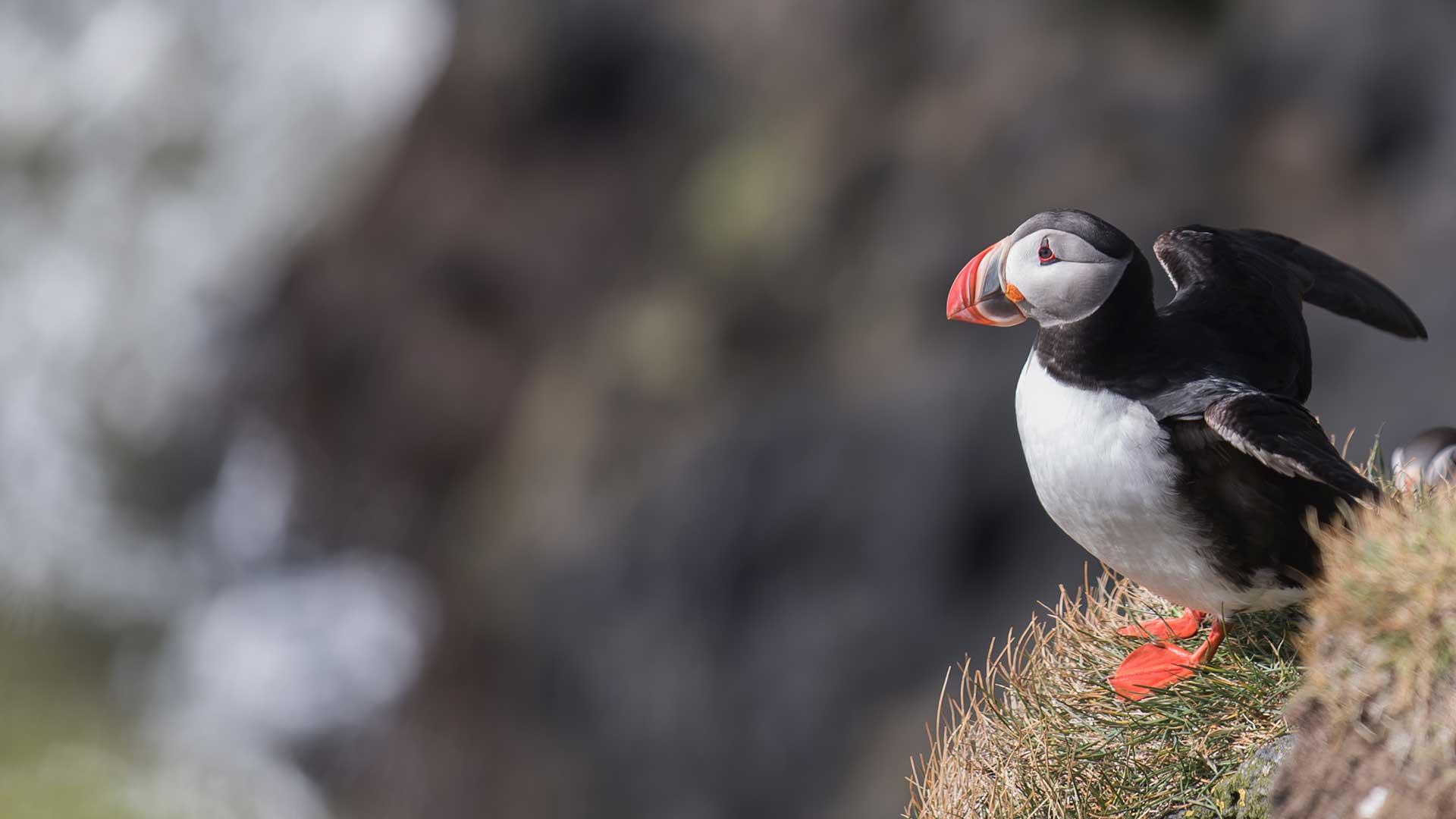 That’s not their only impressive physical feat though. Puffins are also expert divers and swimmers. They flap their wings to swim underwater and can dive to depths of 60 metres (200 feet) in search of delicious fish.

It's to their benefit that they can handle themselves in and out of water considering the following...

2. They spend two-thirds of the year at sea

Indeed, puffins spend 8 months of the year far from land, bobbing around the cold sea and hunting for fish. In fact, they only come to land to mate and nest.

Their return to nesting grounds generally takes place in mid-April each year. They then depart for another winter at sea by the end of August.

What's interesting is that puffins mate for life but don't necessarily spend their time at sea with their partner. Instead, mating pairs reunite at their usual nesting grounds each spring. They make adorable baby puffins and share child-rearing responsibilities for a few months before going their separate ways once more.

When they are on land, they nest in burrows that stretch just shy of a metre underground.

Nesting spots include the coasts of Iceland, Greenland, Norway, Scotland and Ireland. In fact, the Cliffs of Moher on the Irish coast are a Special Protected Area for seabirds because so many colonies summer there. 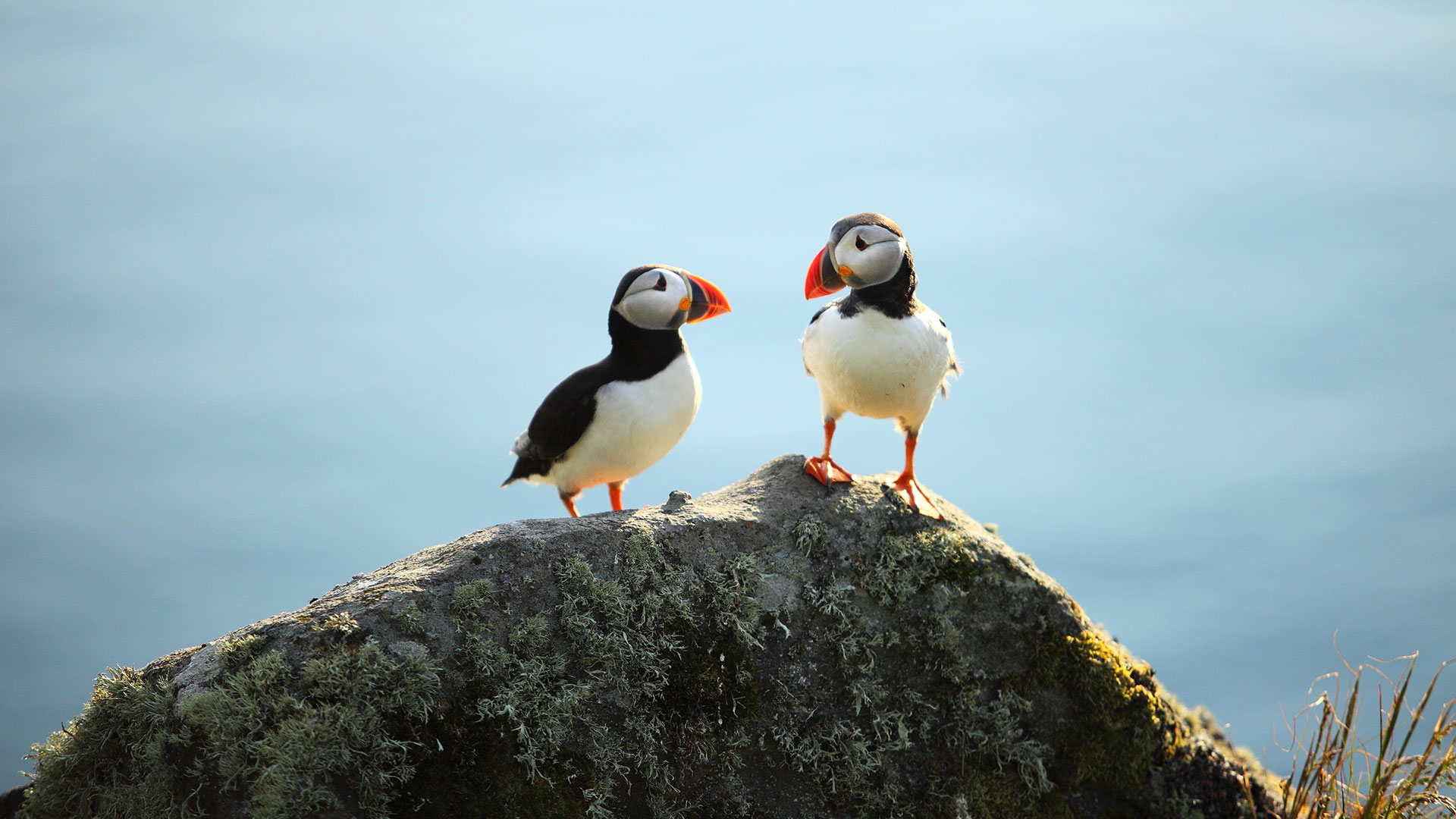 3. Puffins are the clowns of the sea

Despite spending so much of their lives on the water, puffins are still considered the clowns of the sea. Why? Well, if you have the chance to watch them taking off from the sea and landing again you'll understand.

As adept as puffins are at swimming and diving, beginning and ending their flight on the water is a comedy routine.

Puffins use their brightly coloured feet to run clumsily across the surface of the water before take-off. And their landings are anything but graceful, typically ending in a belly-flop or comedic tumble and roll across the water's surface.

They're also affectionately called clowns on account of their brightly coloured beaks.

4. The puffin's colourful beak is seasonal

The iconic feature of the Atlantic puffin is its brightly coloured striped beak. But did you know those dramatic hues are seasonal? Puffins malt during their time at sea and shed all the colourful portions of their beaks as well as the black markings around their eyes in the process.

So if you ever come across a puffin during the winter you may not recognise it as a puffin, thanks to its drab grey pecker. Although, you’re unlikely to do so as even researchers know very little about the puffin’s lifestyle at sea.

Young puffins are similarly coloured when they first face the big wide world. Their faces, beaks and feet are all grey!

Mama and papa puffins take turns fishing and delivering their catch back to the nest for their little ones. For maximum efficiency, the joints of their beaks are notched. This means the birds can hang on to their catch even while diving back in, open-mouthed for more.

Another impressive fact? One little puffin can carry up to 10 fish in its muzzle at any one time. 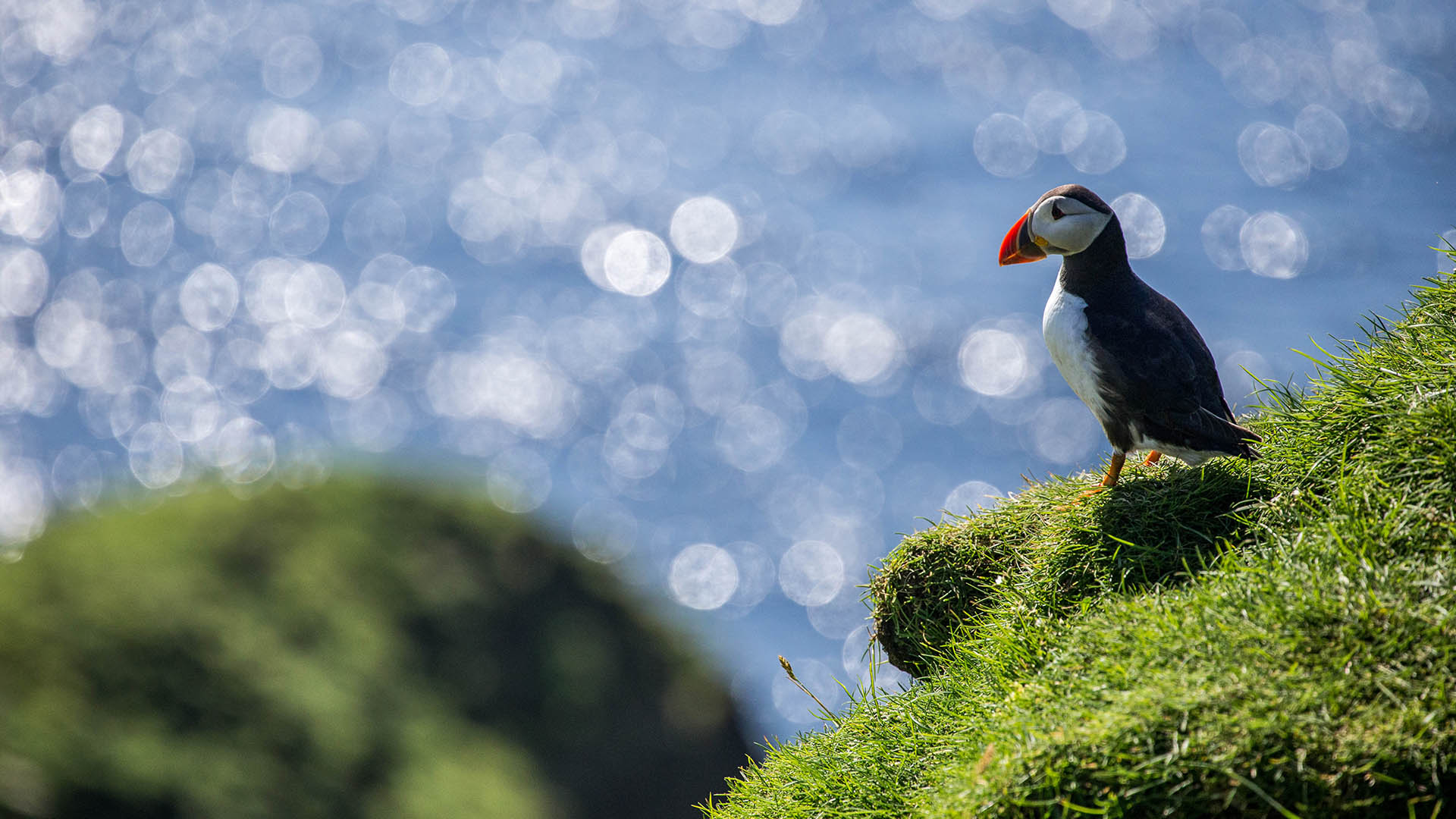 When and where to see puffins in Iceland?

It’s good to know so many great puffin facts, but do you want to see them for yourself? We know you do!

Around 60% of the global population of Atlantic puffins nest in Iceland each spring and summer. This is 8 to 10 million puffins coming to the island every year, making it an ideal location to spot them.

These colourful birds start arriving in Iceland as early as April, but the best period to see them is between May and early August. This is when you should aim to travel to Iceland if this is one of the goals of your visit.

As for the best locations to spot puffins in Iceland? There are colonies located along the coast around the country. We recommend the Westman Islands in South Iceland, Grímsey island in North Iceland and the beautiful Westfjords. The Látrabjarg cliffs are in fact one of the most crowded bird cliffs in the world.

The best ways to see them include hiking along the coast and boat tours. A self-drive trip around the country will give you the best opportunities to tailor your days and itinerary to stop along the way for these fun excursions.

Don't hesitate to ask your travel consultant about adding a puffin tour or puffin- and whale-watching cruise to your itinerary! It'll make your time in Iceland even more special.

Intrigued to spot these famous puffins and explore the natural elements of Iceland?

Look up our best-selling tours for inspiration or get in touch so we can help. One of our travel consultants based in Iceland will use their expert local knowledge to help you tailor an ideal trip.

From hikes along seabird cliffs to special boat tours, you’re in for a treat with a puffin tour of Iceland.

Tags:
Activity, Iceland, A little something about