Like almost everything about nature in the Nordics, the northern lights are unpredictable. In September of 2015, one of our travellers snapped some northern lights photos before the season had even officially begun.

We were surprised too. In general our consultants don't recommend looking for auroras until October at the earliest. This is even reflected in the availability of the northern lights tour packages we offer.

But sometimes, with a little luck, the elusive and magical auroras appear before winter has even started.

Fortune strikes on the Full Circle

This Traveller Story is courtesy of Colin Smart, who captured fabulous auroras and many other "WOW" sights during his 10-day Iceland Full Circle tour in early September 2015. 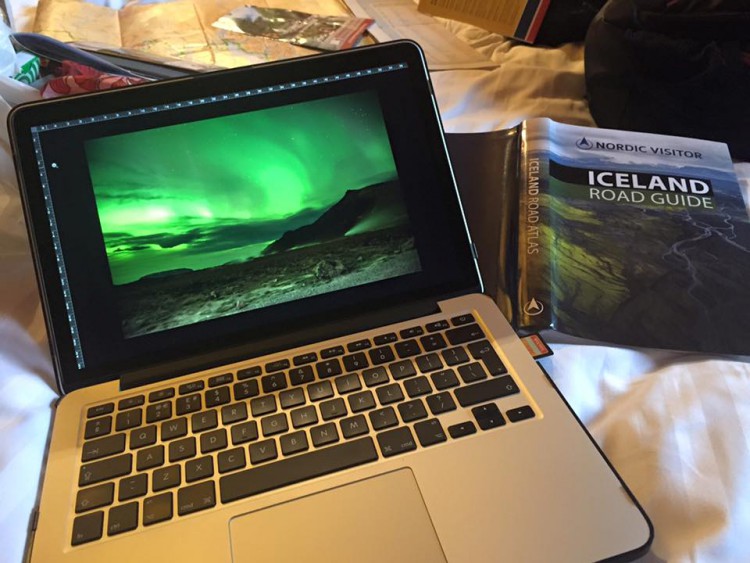 "Arrived at Vogar Farm at Lake Mývatn on our Iceland Full Circle trip in time for some northern lights last night, mesmerising." Colin's post from 8th September 2015 on our Facebook page, where he shared his photos.

Aurora-spotting tips from our happy traveller

We've written about this brilliant natural phenomenon here before, about how to photograph them and other viewing tips. But perhaps the best advice we can give is to have an open mind, be patient, and bring plenty of warm layers for northern lights excursions.

Because you will need to spend some time outside in the cold.

Colin also shared some of his photography tips with us:

I have photographed the night sky before, never the northern lights, but I have four tips to anyone who wants to photograph them:

2: Research how to photograph the night sky in advance and practice at home. You won’t regret it and won’t be fumbling around in the dark!

3: When driving around Iceland, keep an eye on the weather and aurora forecasts, look out for special places that would make a beautiful image, remember where they are, and try to capture that special moment.

4: Enjoy one of the spectacular beauties of the natural world, it’s free and will stay with you forever! 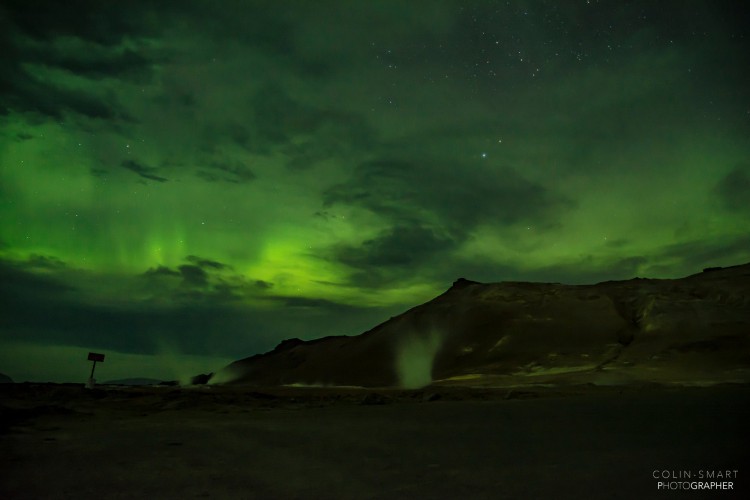 Colin snapped these lights over the Hverir (Hverarönd) geothermal field in North Iceland, the same place as the winning photo (in cover image).

Lucky for Colin, his prize is a Vatnajökull Primaloft Jacket and Surtsey Hat from our photo contest co-sponsor 66°North, so he's well prepared for his next aurora photography trip in the Nordics!

Along with many other sights, seeing the northern lights was a 'must do' for me and I was so lucky to catch them so early in the season. Every day when we reached our hotel I would check the weather and aurora forecast on the Icelandic Met Office website and plan my night.

On arriving at Lake Myvatn halfway through the trip, it was cloudy but clear, and the aurora forecast was good. So at midnight I checked out the hotel room window and saw what appeared to be a slight green tint to the clouds - my patience had worn off.

We drove to Hverir to where we knew it would be dark and the rest is in the image, such a beautiful night and one we will treasure forever. 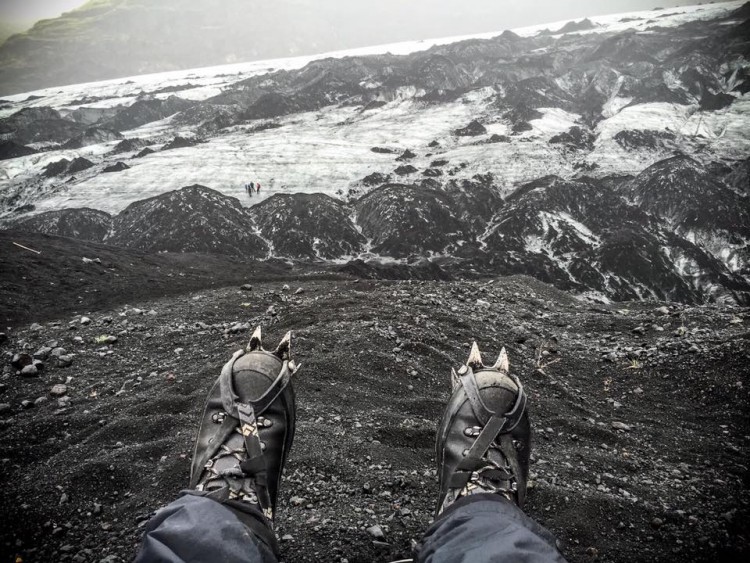 "Trekking across Sólheimajökull Glacier in Iceland is something I'd recommend anyone to do if you choose to visit the island. I will be coming back, this Iceland Full Circle tour is amazing." - Colin, Sept. 6th 2015.

Colin and his co-adventurer Sarah added some extra adventures to their self-drive package, including a guided glacier walk at Sólheimajökull (part of the vast Mýrdalsjökull glacier in South Iceland), a boat ride around the icebergs at the Jökulsárlón glacier lagoon, and luxury massages at the Mývatn Nature Baths, a geothermal lagoon in North Iceland. 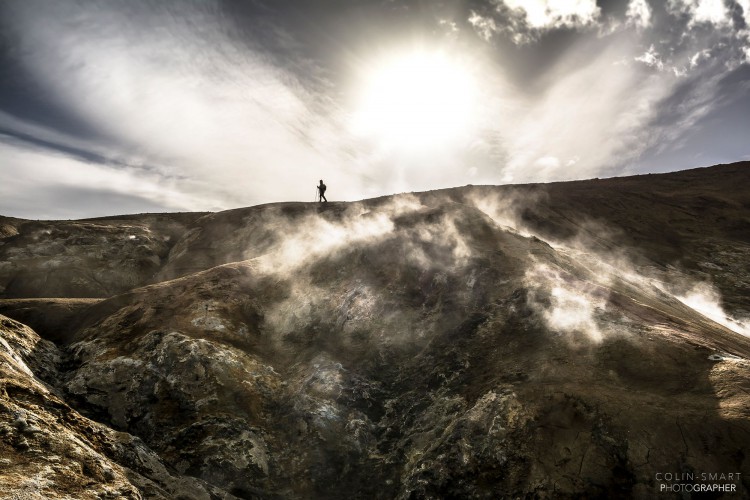 "Trekking across the sulphurous volcanic landscape of Krafla in the Mývatn region of northern Iceland on September the 8th on our Iceland Full Circle tour, the ground hisses as steam and volcanic gases escape from the ground around you, Mother Nature letting you know that she is not far below..." - Colin.

On photographing landscapes in Iceland, Colin also had this to say:

This trip to Iceland was our first visit to Iceland and certainly will not be our last. We plan to return next year, again with Nordic Visitor, to see other parts of Iceland that we didn’t get round to or missed during our full circle tour, which was absolutely amazing...

Landscape photography has always fascinated me but is a relatively new avenue for me when it comes to taking images. Iceland was my testing ground as previously my work focused on automotive photography based around the world's finest cars.

I had taken a few landscape images but nothing that would prepare me for a crash course of photographing the natural beauty of Iceland. Every corner, every twist & turn revealed an idyllic vista that that my eyes couldn’t get enough of… 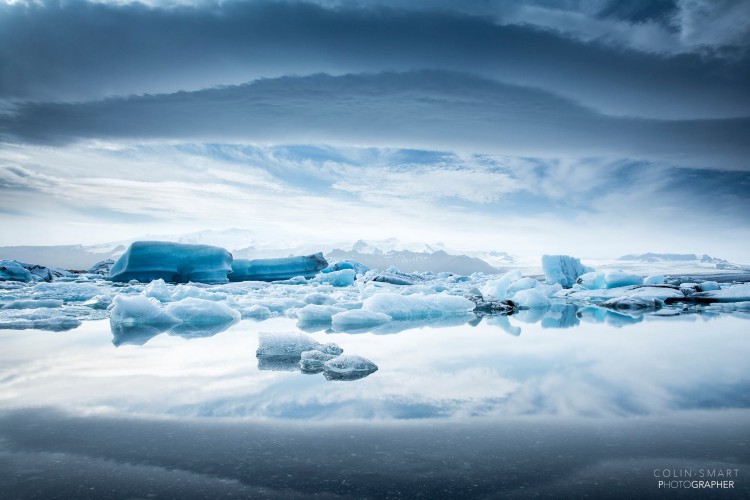 "A view across the Jokulsarlon Glacier Lagoon, Iceland. Taken during our Iceland Full Circle tour a couple of weeks ago with Nordic Visitor. Awesome place. A calming and serene place in this chaotic world we call home." - Colin, 22nd Sep.

GOOD TO KNOW: The "northern lights season" is generally considered to be the winter months, October through April, when there's ample darkness in the evening. But as soon as the summertime midnight sun phenomenon eases off, it's possible to see them as early as mid-August. Check out Iceland's sunrise and sunset times at our website.