Imagine watching vivid celestial lights dance across the sky in shades of green, red and pink. And all the while you're snug under a blanket!

If you've dreamed of a moment similar to this, you're not alone. Thousands of people visit Iceland every year in the hope of seeing the northern lights. It's probably on more travel bucket lists than anything else.

Well, you too can see this legendary light show with a bit of luck, patience, and careful planning. To help you boost your chances, we’ve put together this guide. It details the best times and places to see the northern lights in Iceland, as well as some travel expert advice.

So get ready to find the answers to popular questions about auroras, and even learn tips on photographing this (literally) heavenly display. 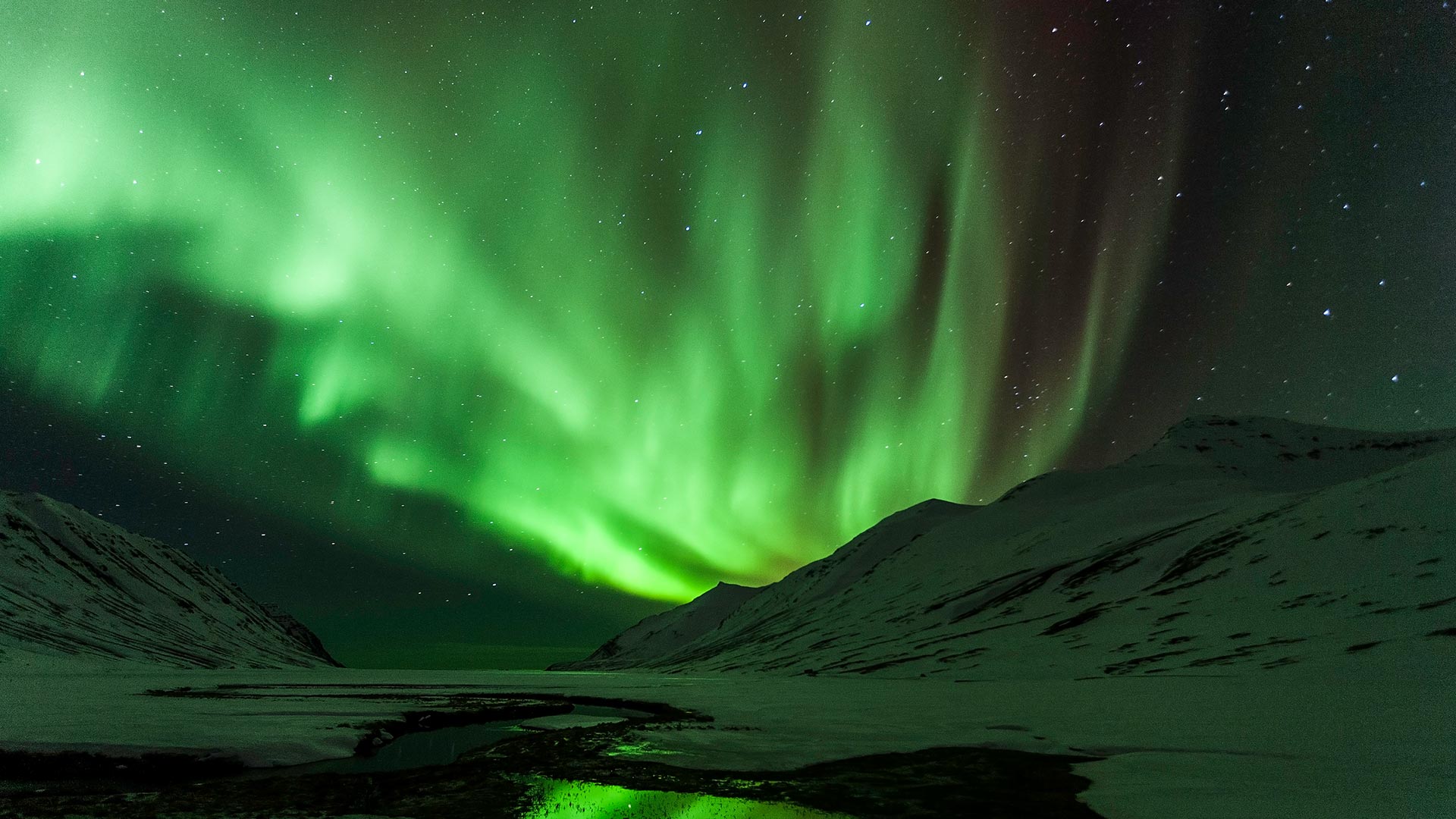 When is the best time to see the northern lights in Iceland?

This comes down to two factors: time of year and time of day. The best months are between October and March. The best time of day would be the hours around midnight.

When is northern lights season in Iceland?

You have a greater chance of seeing the aurora borealis between October and March. However, that’s not to say you won’t or can’t see the northern lights at other times of year too. Your chances are just raised during this time, which is why our tours run across these months.

Winter is the ideal time to visit Iceland to see the northern lights thanks to the longer nights of the season. Some regions get as much as 19 hours of darkness on the shortest day of the year, which provides plenty of opportunity for spotting the aurora borealis.

As Iceland has long hours of daylight during the summer, including the phenomenon known as the midnight sun, it’s much harder to see auroras during this time of year.

What is the best time of day to see the aurora borealis?

Northern lights often appear during the darkest and coldest part of the night, so most sightings happen between 23:00 and 02:00. You can spend the night stargazing, on the lookout for this heavenly display, and some hotels also offer a special "wake up service" and will let you know if the northern lights appear. 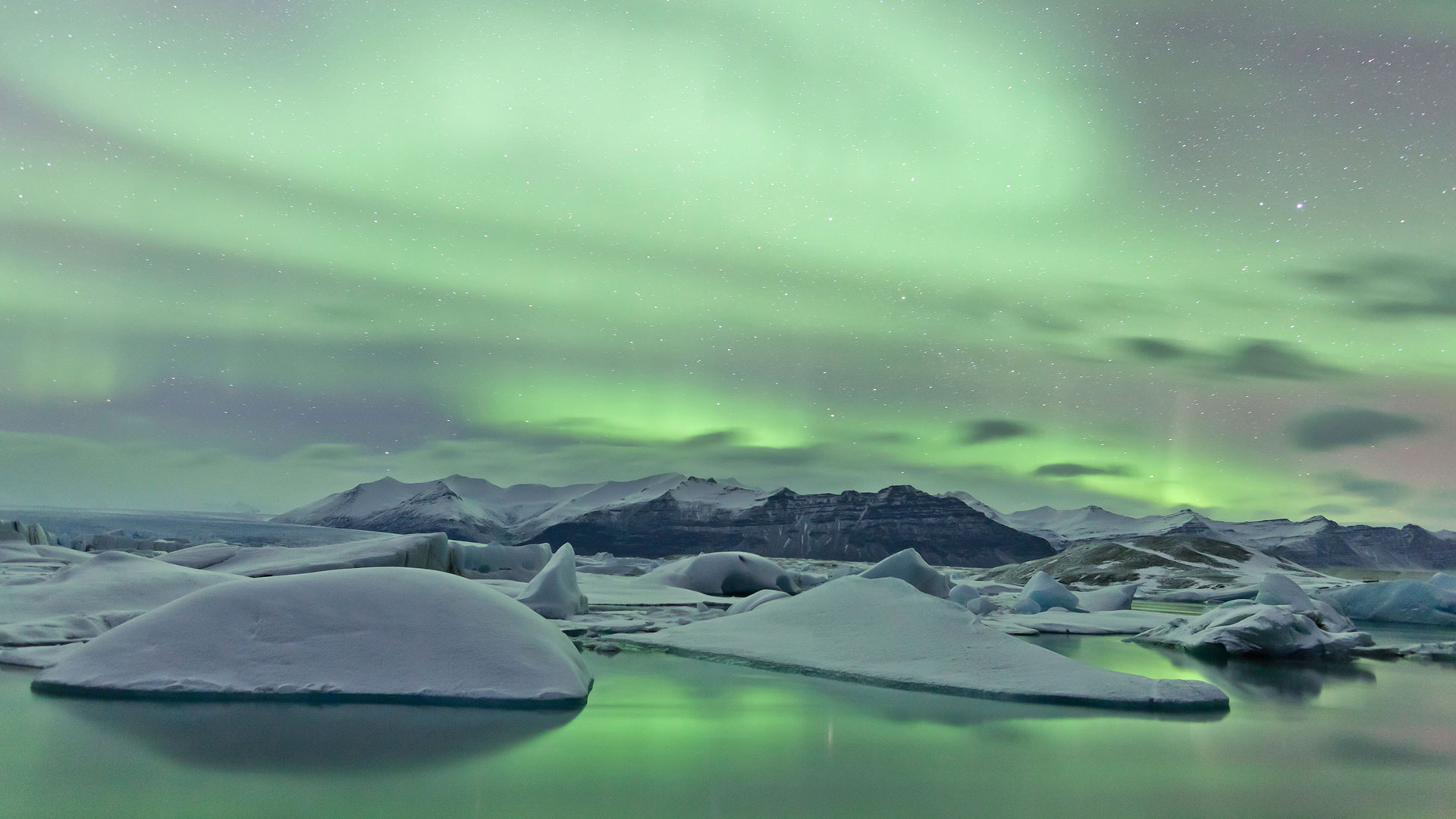 Where to see the northern lights in Iceland

You can spot the aurora borealis from nearly any location in Iceland, even the capital city of Reykjavik. But for the best chances, you should move away from sources of light pollution – that means streetlighting – so travelling outside the city to more remote regions is a good idea.

North Iceland and the Westfjords regions are a bit further north than Reykjavik, which means slightly longer hours of darkness. You have a slightly wider window of opportunity to see auroras.

These areas also offer the benefit of smaller urban populations, reducing any potential effect on your viewing experience from streetlights. 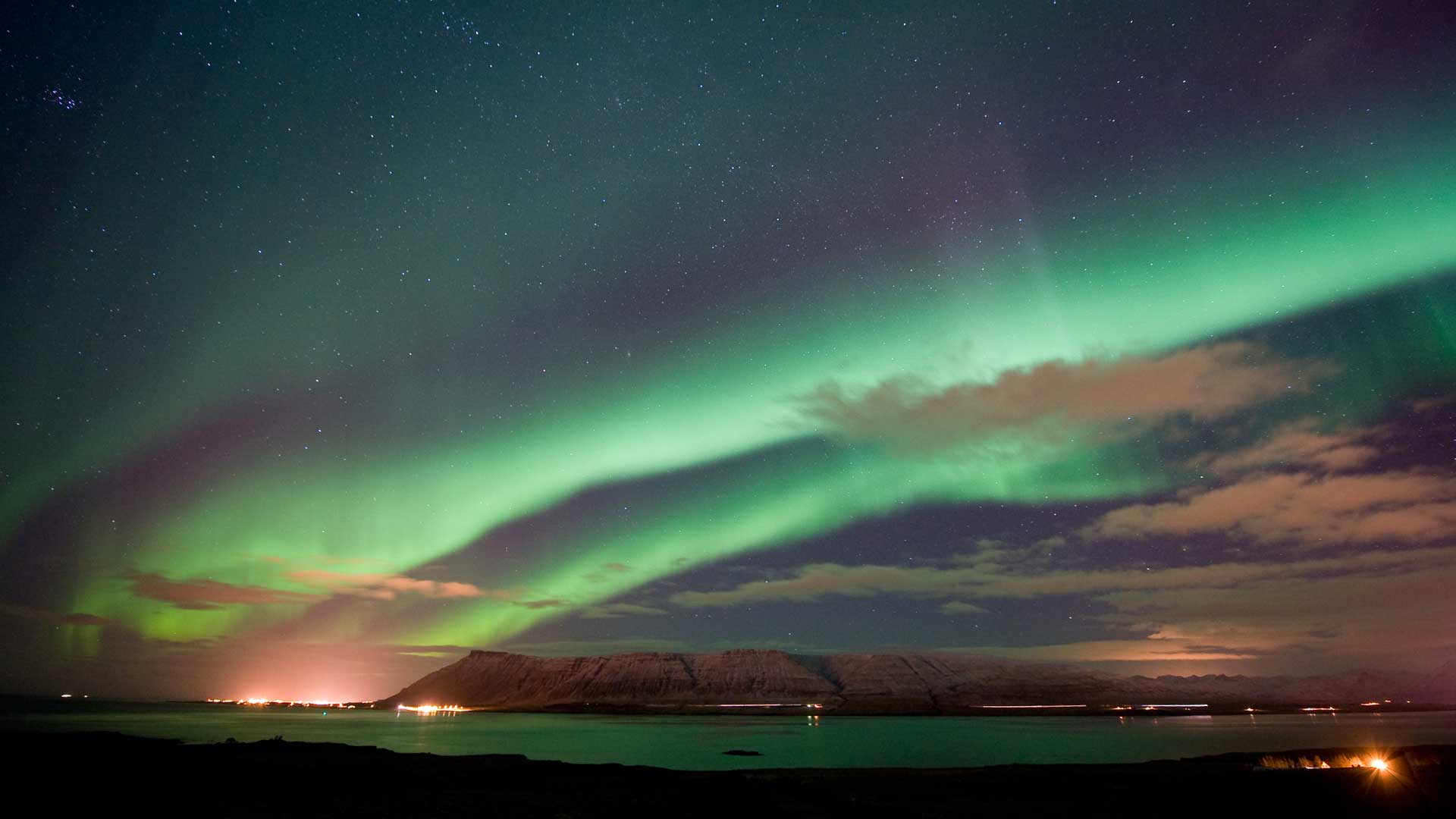 If you're short on time, or prefer to stay in Iceland’s biggest city, you can still see the northern lights. Reykjavik has quite a few parks, which are perfect for getting away from the city’s artificial light.

We particularly recommend Grotta Lighthouse on the Seltjarnarnes Peninsula, as this is one of the darkest areas of Iceland’s capital. It also has a geothermal hot tub, so you can bask in the warmth for a spell while you wait for nature’s light show to start.

Additionally, if you take a guided northern lights tour from Reykjavik but the aurora doesn't appear for you, you could head out again another evening free of charge. Contact our Iceland specialists to find out more. 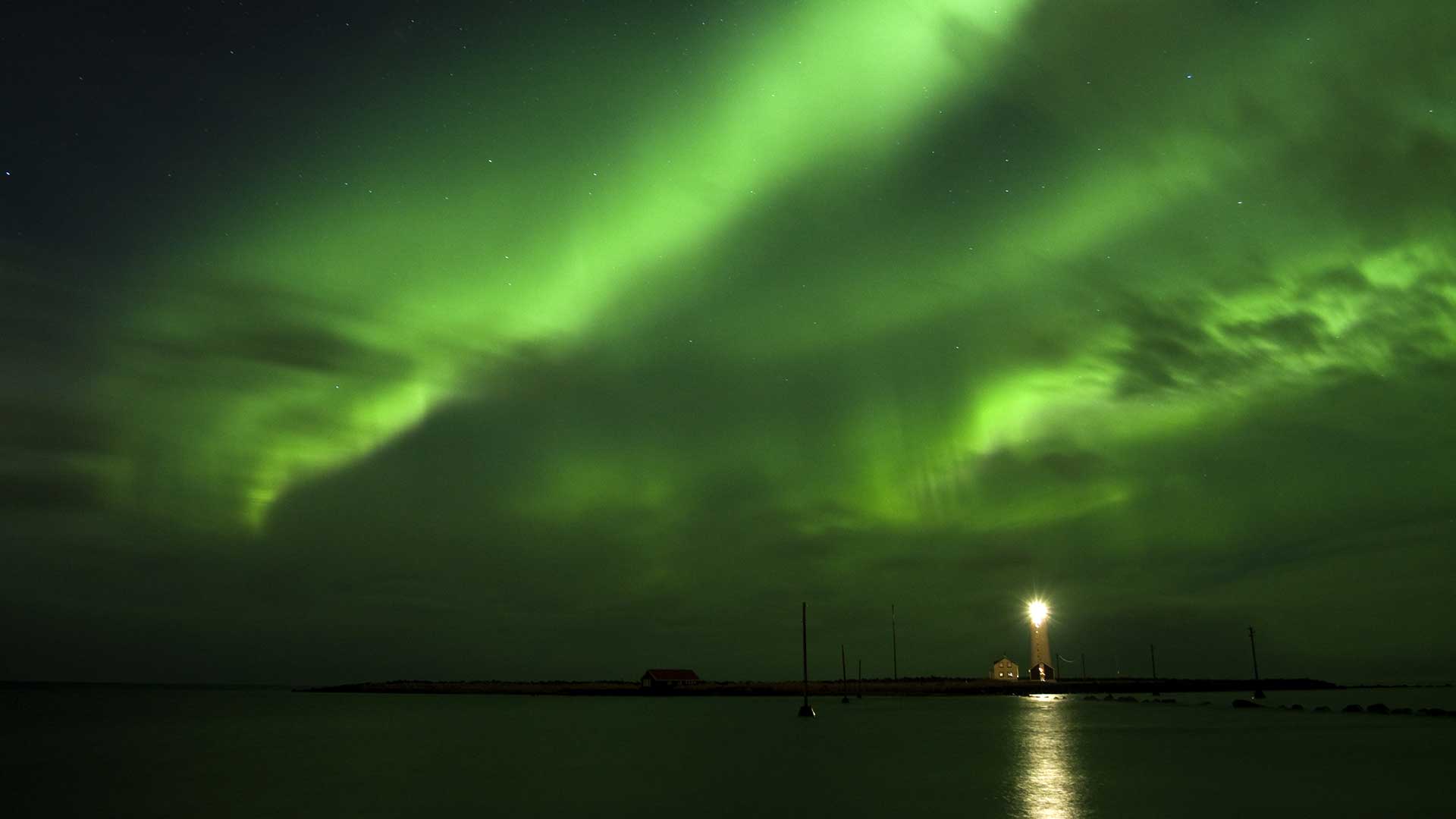 Only a few hours drive from Reykjavik, Vik, with its black sand beaches and basalt columns, provides northern light hunters with a stunning backdrop. Admire the jagged black rocks jutting out from the ocean as the northern lights dance above you. During the day, you can enjoy the authentic fishing village of Vik before continuing your Iceland adventure.

Northern lights are best witnessed on a clear night – one with a full moon or without cloud cover. You can check weather conditions beforehand and see whether your chances are high with the Icelandic Met Office’s aurora forecast.

The Met Office forecast gives you a rating, between 0 to 9, of your likelihood of seeing the aurora borealis. Anything above a 2 is promising.

Here are some other tools for planning your northern lights hunt:

When the aurora borealis appears, you’ll undoubtedly want to take lots of snaps. Photographing the aurora borealis takes a bit more expertise, and your camera needs a good night time setting. Using an SLR camera with a manual focus often produces some of the best results.

You might also want to bring a tripod for long release shots, shutter release for steady shots and, of course, spare batteries and extra memory card.

On a more technical note, we also recommend turning off your camera’s image stabiliser and increasing its ISO to at least 400 to 800 (or even higher) depending on your lens. Also, set your aperture as low as possible and use long exposure shots of 15 to 30 seconds to help your camera capture more light.

Practice taking some night time shots beforehand, so you’re prepared when the northern lights appear. After all, you don’t want to be adjusting settings and miss one of nature’s best light shows.

Hire a car: rent your own wheels and head off into Iceland’s more remote regions. Getting away from the crowd means you won’t have to deal with city lights and can experience the northern lights on your own. Our self-drive tours can help you plan your route.

Hire your own guide: engaging a private tour guide can be a great idea as they have the inside scoop and can take you to some of the best spots for watching the northern lights. While they certainly can’t control whether the lights appear, they can make sure you don’t miss them!

Join a group tour: watch the aurora borealis with new friends on a group tour. Guided tours take all the hassle out of planning your northern light hunt as guides handle everything so you can relax and enjoy the experience.

What are the northern lights?

The northern lights, also known as aurora borealis, are created when solar winds collide with gases in Earth's upper atmosphere. These "winds" are actually electrically charged particles emitted by the sun.

When the charged particles hit our atmosphere, they excite oxygen and nitrogen molecules, creates an auroral display.

You’re most likely to witness pale green aurora borealis – these shades are produced by the typical altitude where the interactions occur, and are also most easily detected by the human eye. But on rare occasions, you might also see vivid shades of red, yellow, blue or violet dancing across the sky. 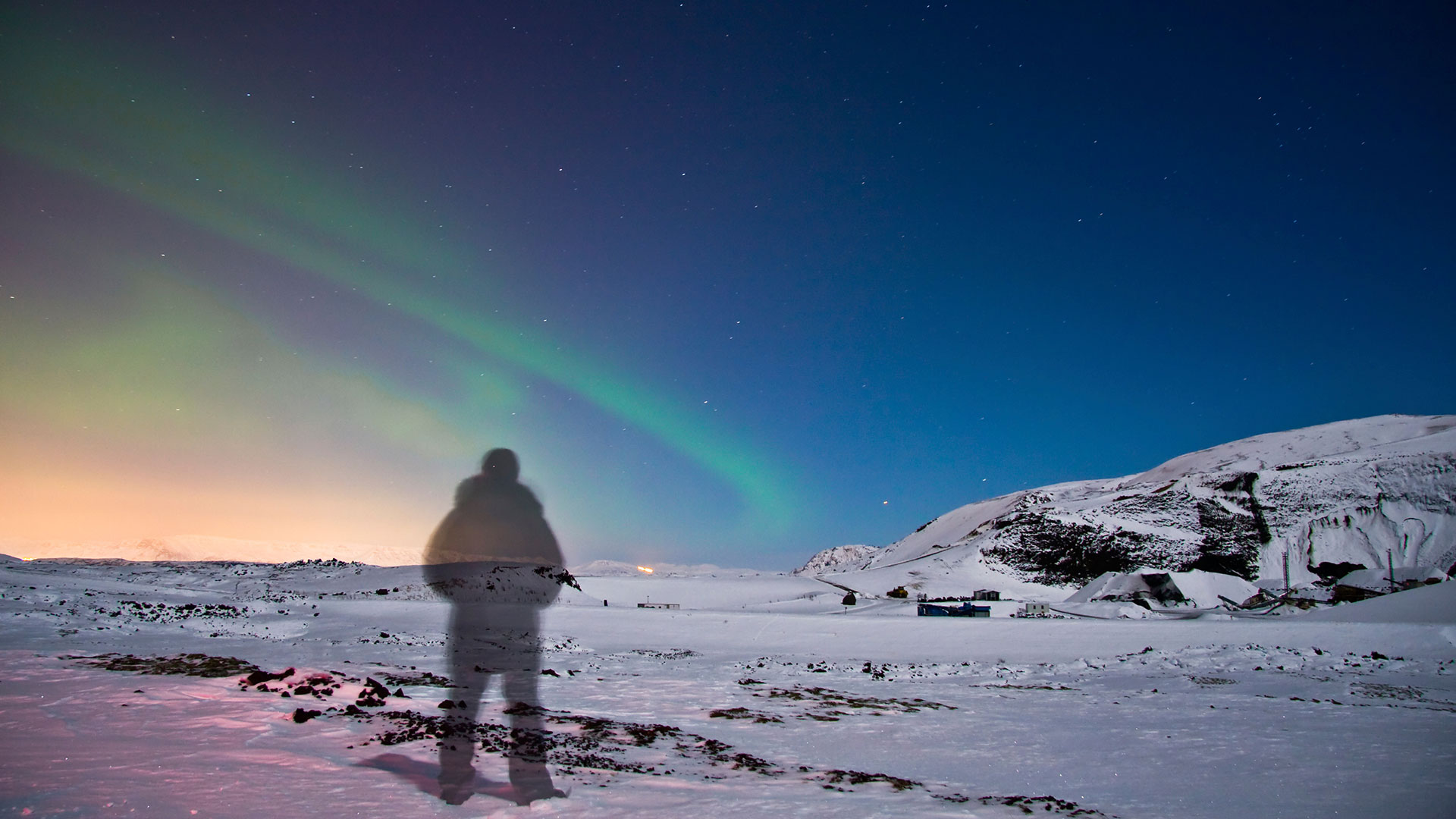 Is Iceland a good place to see the aurora borealis?

Yes. You have the best chance of seeing an auroral display in the 'northern lights belt', an elliptical area about 65 to 72 degrees north. This belt runs through Iceland, making it a great place to see the aurora borealis.

Not only will you have a greater chance of spotting the northern lights in Iceland, but light shows here are often more intense.

Finally, as Iceland is the most sparsely populated country in Europe, there is less ambient light pollution – a factor that can reduce the chances of a clear sighting.

Why does the aurora borealis happen?

Northern lights certainly appear to be from another world, and in a way they are, but their appearance can be explained, like most things, by science.

Aurora borealis appear in the night sky after a solar storm on the sun. Solar storms release giant flares, which in turn release charged particles into the solar system. Over the course of 40 hours, these particles travel the 100 million miles or so it takes to reach the Earth’s atmosphere.

When they reach Earth, they collide with atoms in our upper atmosphere creating the spectacular and colourful phenomenon we call the aurora borealis. 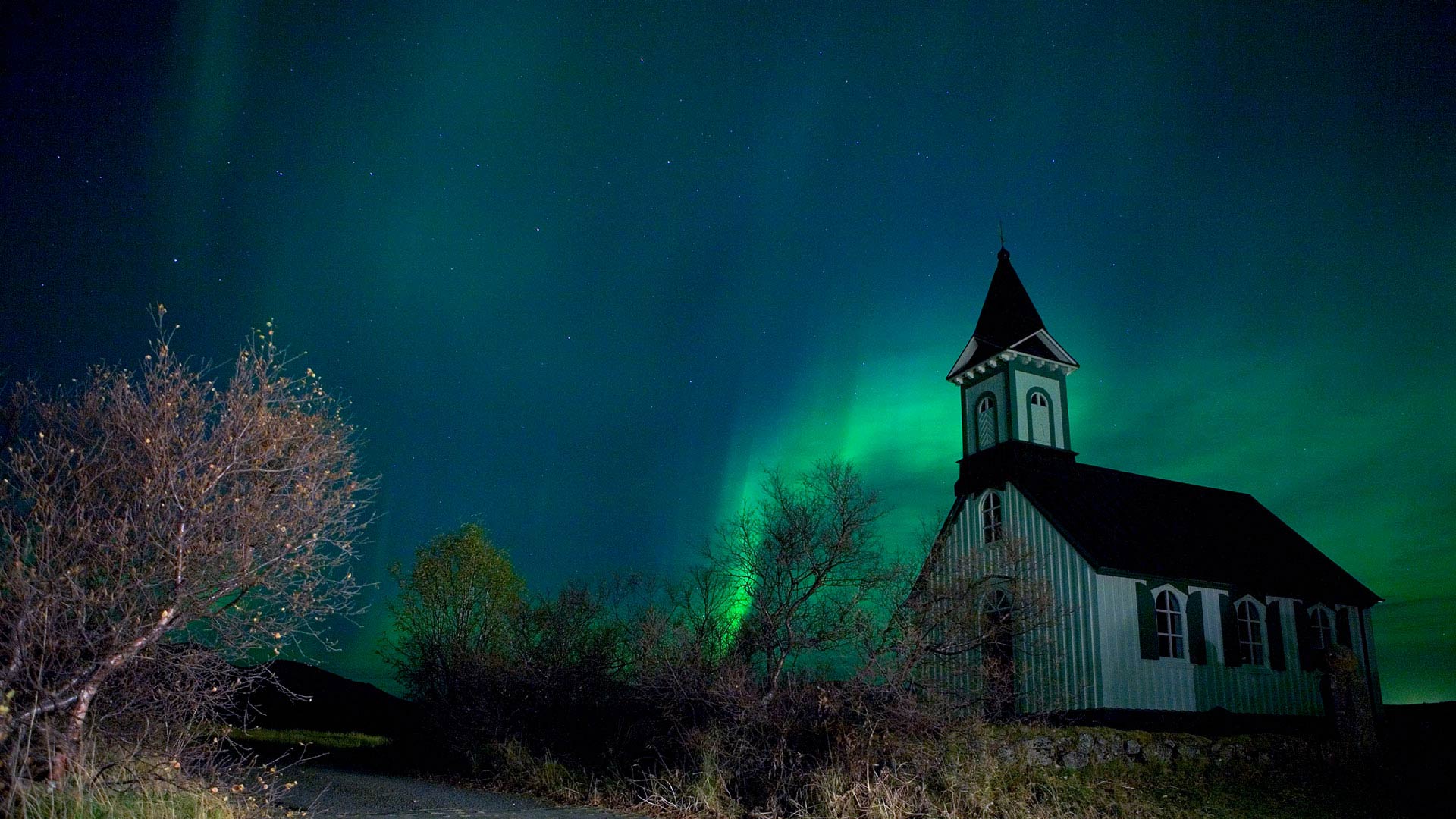 Like most natural occurrences, the aurora borealis is infamously unpredictable and never arrive on a set schedule. They can also take a variety of forms, and no two shows are ever the same.

You might spot gentle green waves or pink rippling curtain or sweeping blue arcs. You only have to look at photos to release how different each light show truly is.

Their exact shape and colour depend on the type of atoms, the intensity of the sun’s solar activity and the Earth’s magnetic forces.

In Iceland, Norse culture considered these lights to be reflections from the armour of Valkyries, women warriors of legend who chose who lived or died in battle.

Icelandic people also believed that it was bad luck for women in childbirth to look upon the northern lights: doing so would cause their children to be born cross-eyed!

SOUTH ICELAND & INTO THE GLACIER - WINTER

How Long Does It Take to Drive Around Iceland?