One of the things that strikes visitors to the west side of Reykjavík is that, no matter the time of year or the weather, there is always a queue outside the ice cream shop Ísbúð Vesturbæjar. Icelanders love ice cream anytime, anywhere.

So in the spirit of true Icelanders, Nordic Visitor's Canadian transplant, Catharine, has tried the most heralded homemade ice cream around the country... strictly for research purposes, of course.

This is We Tried It.

Let's start with ice cream straight from the source -- rural Iceland. To avoid repetition throughout this post, there are a few features that all three countryside locations mentioned below share: are all incredibly lovely farms; they all milk their own cows every morning; and they all turn the morning's milk into the day's ice cream, adding almost exclusively natural flavours along the way.

Not far from the junction where the northern base of the Snæfellsnes peninsula meets the Ring Road, in Búðardalur, is Erpsstaðir cottage, a welcoming farmhouse sitting on the edge of a dusty dirt parking lot. It doesn't look like much from the outside, to be honest, but it's holding a very juicy secret. Homemade ice cream. 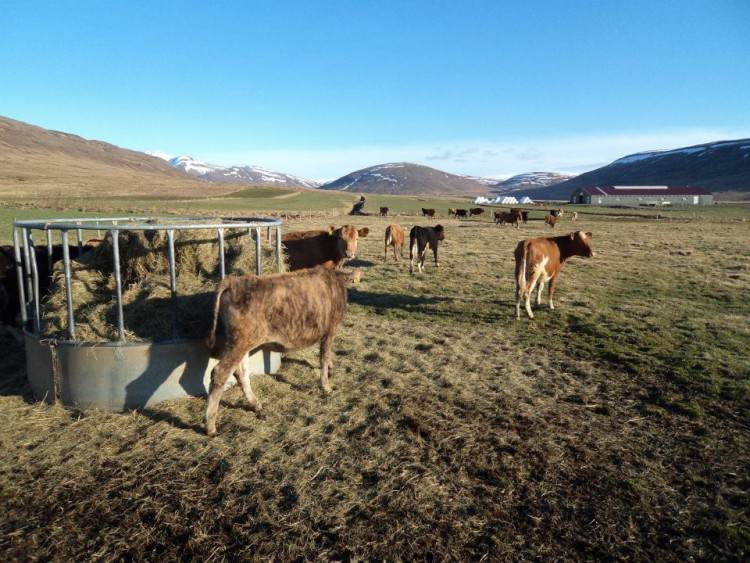 Happy cows graze with Erpsstaðir farm in the background.

What's more, Erpsstaðir makes and sells the incredible Skyrkonfekt, a product created in collaboration with Brynhildur Pálsdóttir and other designers from the Icelandic Academy of Design.

Erpsstaðir uses its own organic skyr -- possibly the most Icelandic of dairy products -- and coats it with luxurious white chocolate to create a delightful treat. To up the cute factor, the whole thing is shaped like a cow udder and packaged beautifully in colourful wrapping. 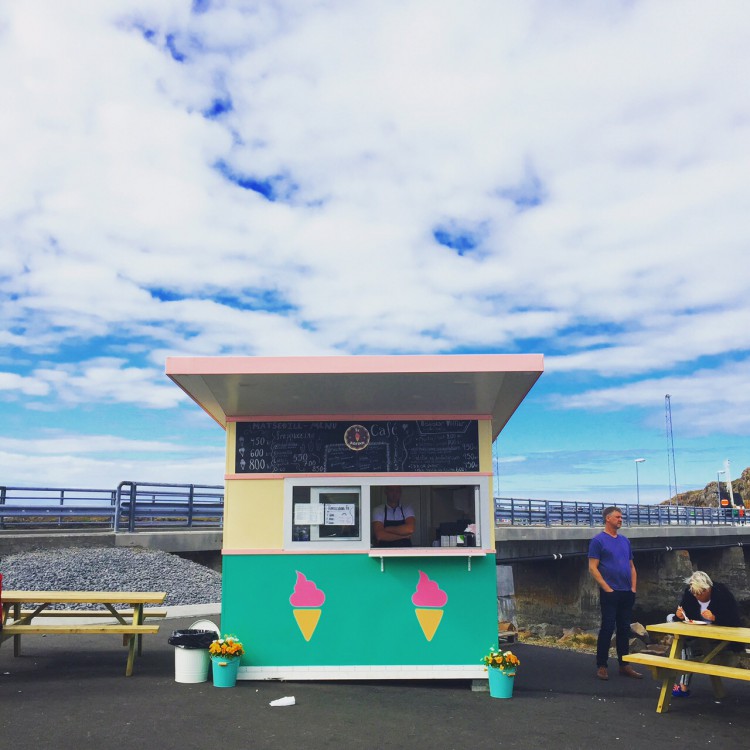 If you don't make it out to Erpsstaðir, you can enjoy their ice cream at the colourful harbour-side ice cream stand in Stykkishólmur and pick up Skyrkonfekt in Reykjavík at Fru Lauga and Vinberið.

This place takes the "direct from the farm" concept very seriously. Not only can you enjoy ice cream made fresh from the milk of the cows on this very farm, but you can do so while watching the cows through a window between the cafe and the cow shed. How fun! 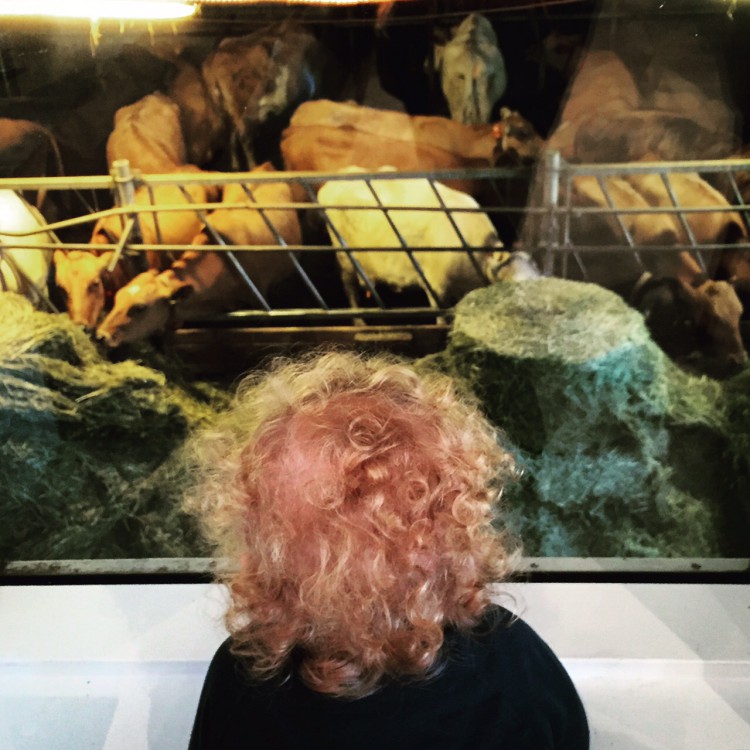 Watching the cows while grabbing a bite at Efstidalur is like dinner and a show! This was a particular hit with the author's young daughter, who was almost more interested in the cows than the ice cream.

Efstidalur is in the vicinity of the famed Golden Circle -- which includes Gullfoss waterfall, the Geysir geothermal area and Þingvellir National Park -- and is a great place to visit for a bite (they serve farm-fresh main courses to precede your ice cream). 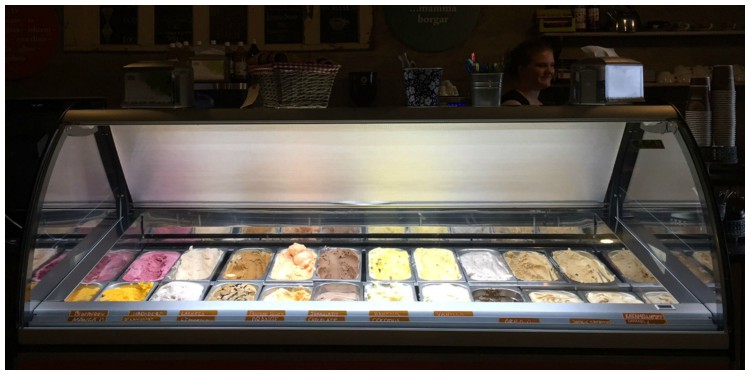 Which flavour is your favourite?

I indulged in a single scoop of salted caramel ice cream in a waffle cone while there and it was the prefect balance of salty and sweet. Plus, I could have eaten a dozen of the waffle cones just on their own, they were so good!

With stunning views over the surrounding countryside and the incredibly beautiful Vatnajökull -- Europe's largest glacier -- I can think of few better places to sit and reflect with a sweet treat. Brunhóll started making farm-fresh ice cream (and sorbets!) in 2007, calling their ice creamery Jöklaís (Glacier Ice Cream).

It's the farthest afield from Reykjavík, but along the way you'll see such marvels as Reynisfjara, Vík and Jökulsárlón, so it's well worth the drive.

You can really taste the freshness of this ice cream. It's wonderfully sweet and a nice treat after a long day on the road.

Not heading out to Iceland's stunning countryside but still looking to indulge in a frosty treat? Reykjavík has enough ice creameries and gelaterias to satisfy your sweet tooth. Below are my two favourites.

Reykjavík underwent an ice cream reawakening circa 2012, and it began with the establishment of Valdís in the long turquoise storage buildings at the far end of the city's old harbour.

In a country where vanilla soft-serve was par for the course and largely considered the best thing since sliced bread, a colourful little shop serving up scoops of homemade gelato in a range of inventive flavours (and in homemade waffle cones, to boot!) was a game changer. 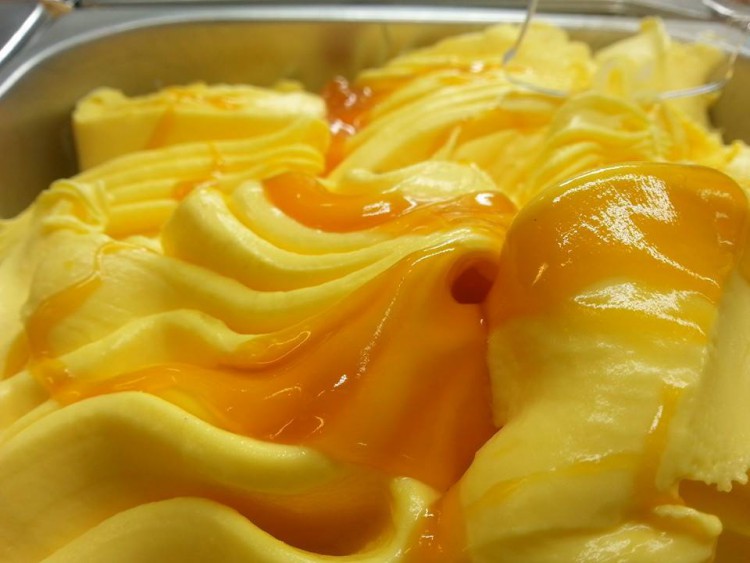 Valdís posts tantilizing images of its daily offerings on its Facebook page... as if you need more reason to visit.

Valdís updates their chalkboard menu on a daily basis, and operates on a take-a-number system which they work through efficiently to satisfy the icecream fix of the masses. It's always busy but always worth the wait.

I recommend the salted nut and caramel, because I'm a sucker for a salty-sweet combo... it's what I gravitate toward everywhere, it would seem. But I can attest that the kiwi sorbet and strawberry ice cream are also delightful, as is the peanut butter cup, Oreo, and coconut... I may visit Valdís too often.

Ísbúð Vesturbæjar is the institution of ice cream in Reykjavík. It is the small shop in the city's west end serving up vanilla soft serve to lines of patrons that will wait in sun, rain, wind or hail for their cone. 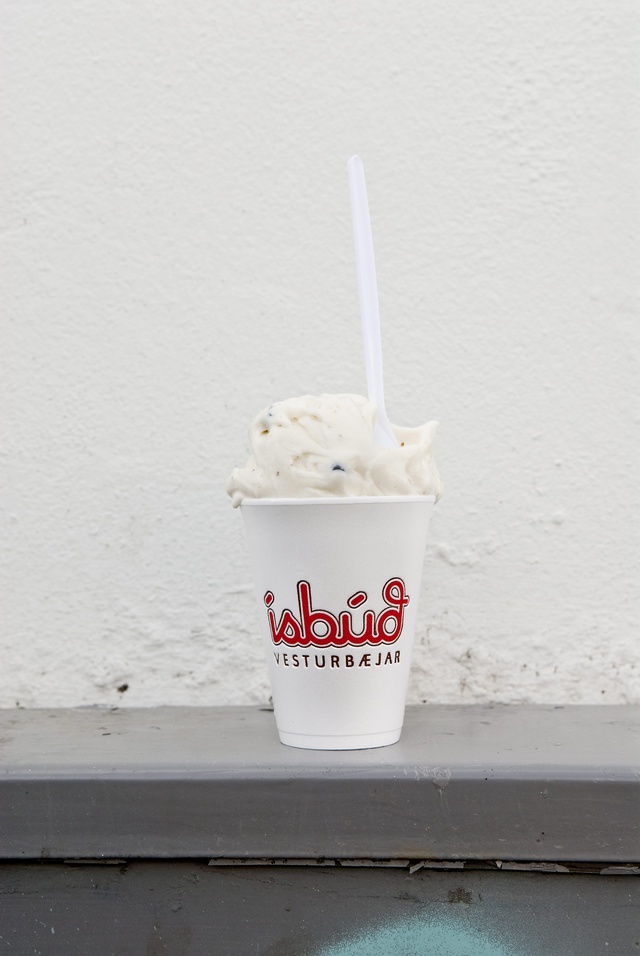 When I first moved to Reykjavík, I admit I just didn't get the appeal of a vanilla soft serve. And while I'd still choose a flavourful scoop over a vanilla swirl given the choice, I've come to appreciate the appeal of Ísbúð Vesturbæjar in particular. As far as soft serve goes, Ísbúð Vesturbæjar does it impeccably. The ice cream is super creamy and rich and they offer up the gamla ís version of soft serve, which is more like flavoured ice.

A visit to Ísbúð Vesturbæjar is about as iconic an event in Reykjavík as scarfing down a hotdog at Bæjarins Beztu or walking leisurely down Laugavegur. If I'm going to soft serve it's going to be dipped in chocolate shell. There's no other way.

Indulge in Iceland's ice cream for yourself -- the capital's offerings can be sampled during a short break, between day tours from Reykjavík. Or you can hit every ice creamery in the country on a Full Circle adventure.

Tags:
Iceland, We Tried It, Food, Things to Do

We Tried It: The Secret Lagoon in Flúðir