Where Was The Crown Filmed?

By: Catherine
Last Updated: 10/10/2022
Posted in: Destinations, Scotland, TV and Movies, Things to Do

It's no surprise that The Crown is one of the most-watched Netflix shows ever. Packed with drama and intrigue, and mixing the political and personal, the series traces the history of Britain's monarchy over a century.

What’s more, it takes you to some of the UK’s most beautiful places at the same time. But there’s something better than seeing these places on screen. Visit The Crown’s filming locations for yourself and you’ll walk in the footsteps of royalty.

So where was The Crown filmed? As you’ll find out below, the series was shot in historic and breathtaking locations across the UK.

Read on to explore charming, magical, and ancient British sites that will be familiar to you from the show. You’ll also discover a few of the royal castles, stately homes, and rural estates that didn’t make it into the series.

Top 8 filming locations from The Crown

Balmoral Castle, the monarchy’s grand Scottish Highland estate, is where some of the most memorable scenes in the series take place. For example, it’s the location of the episode when Lady Diana and Prime Minister Margaret Thatcher have a challenging stay with the royals.

Balmoral itself didn’t appear in the series. Instead, a similar 19th-century Scottish residence played the role. That’s Ardverikie Castle, near Newtonmore in the Central Highlands. With its numerous turrets and impressive Victorian gothic architecture, you can hardly tell them apart.

To get into the royal mood, you can book a tour of the castle. 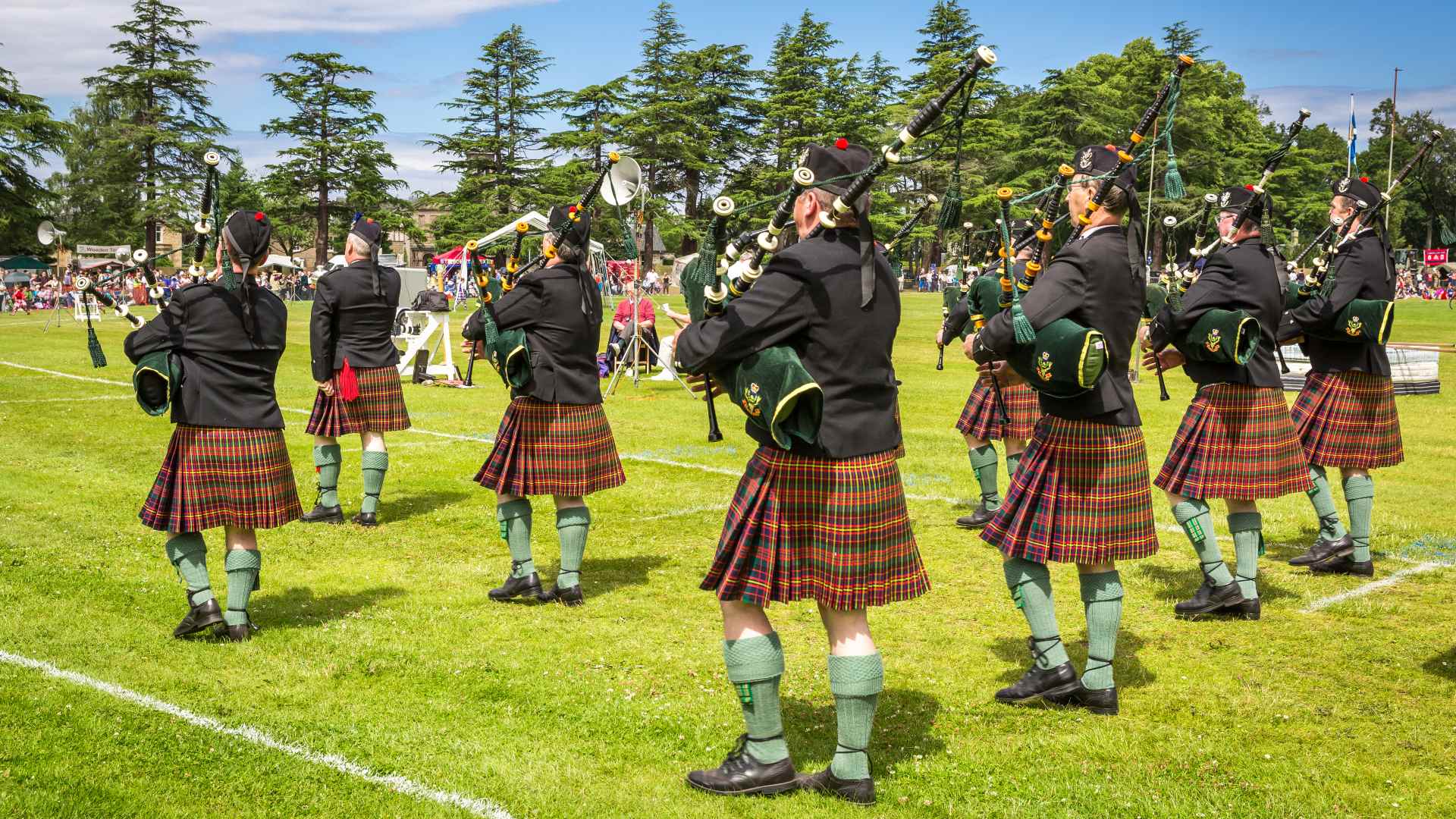 In series 4 of The Crown, we see the Royal Family attending the Braemar Games (also known as the Braemar Gathering). It’s a festival of Highland Games, including tug of war and Highland dancing, that the Royals have attended for two centuries.

The Games were filmed on the stunning Rothiemurchus Estate, near Aviemore, in the Cairngorms National Park. But if you want to visit the Gathering for yourself, head to Braemar village on the first weekend in September.

Explore Caithness, in Scotland’s far north, and you’ll notice many sites that were filming locations in the show.

In the first episode of series 4, you see the young Prince of Wales fishing in the River Hofsá in Iceland. This scene was actually filmed on the rugged Dunbeath Estate. Close by, on the North Coast 500, you could visit the peaceful Lybster Harbour, which doubled as Port Leith in South Georgia.

On the north coast itself, don’t miss Ackergill Tower and Keiss Harbour. You’ll see these places in series 4 too, when tragedy strikes Lord Mountbatten at Classiebawn Castle in Ireland. 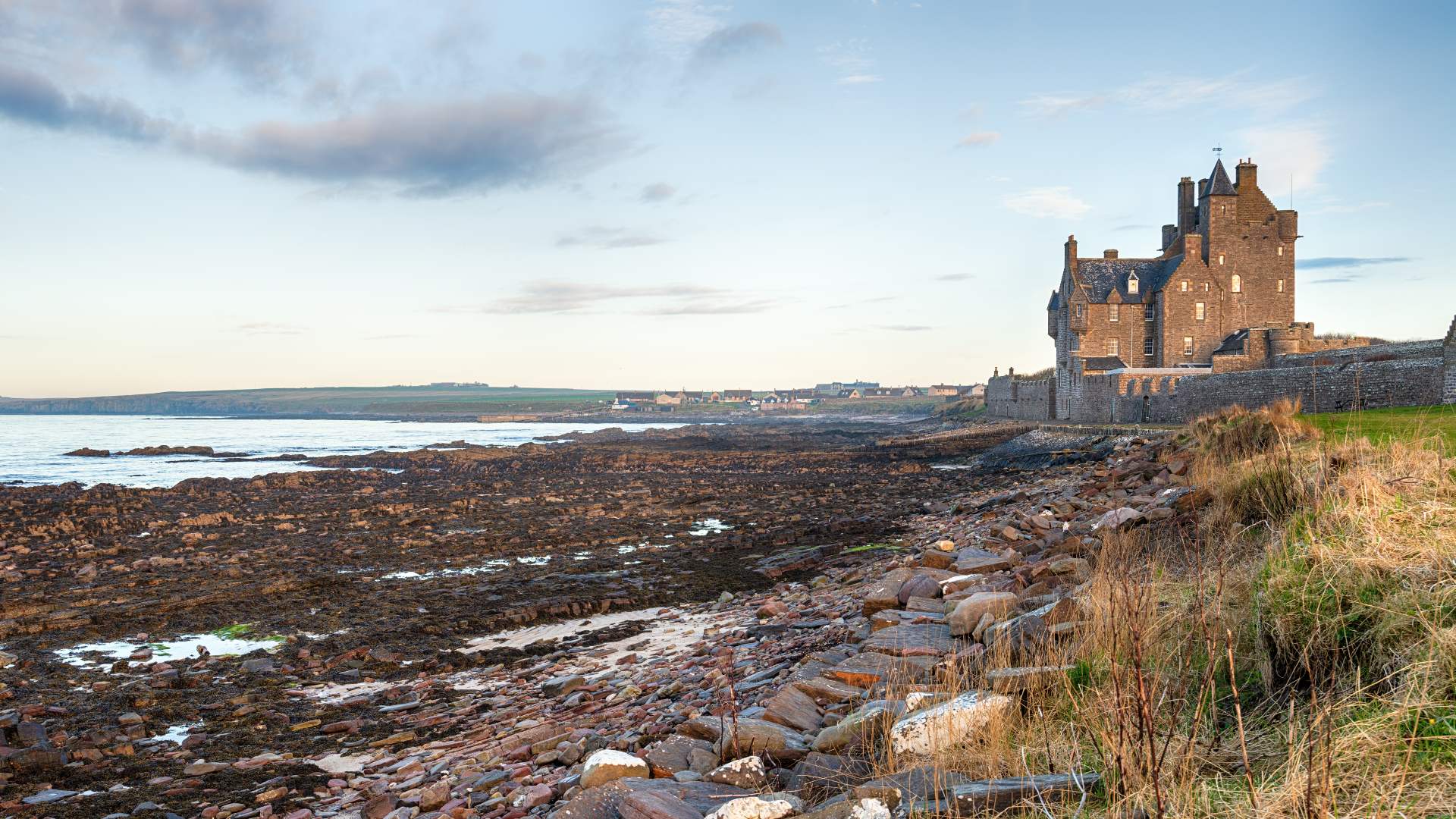 Ackergill Tower looking out over the North Sea

Episode 8 of series 4 sees Queen Elizabeth II embarking on a trip to South Africa aboard the Royal Yacht Britannia, the Royals’ family boat. Not just in the show, this was a symbolic vessel that hosted prime ministers and world leaders from across the globe.

That boat, decommissioned in the 1990s, currently sits in the port of Leith, in Edinburgh. That said, The Crown wasn’t filmed on the original ship. Instead, an impeccable replica was made based on the boat’s interiors.

You’ll see how good a job the set designers did when you visit the yacht itself. It’s one of the most popular attractions in all of Scotland. 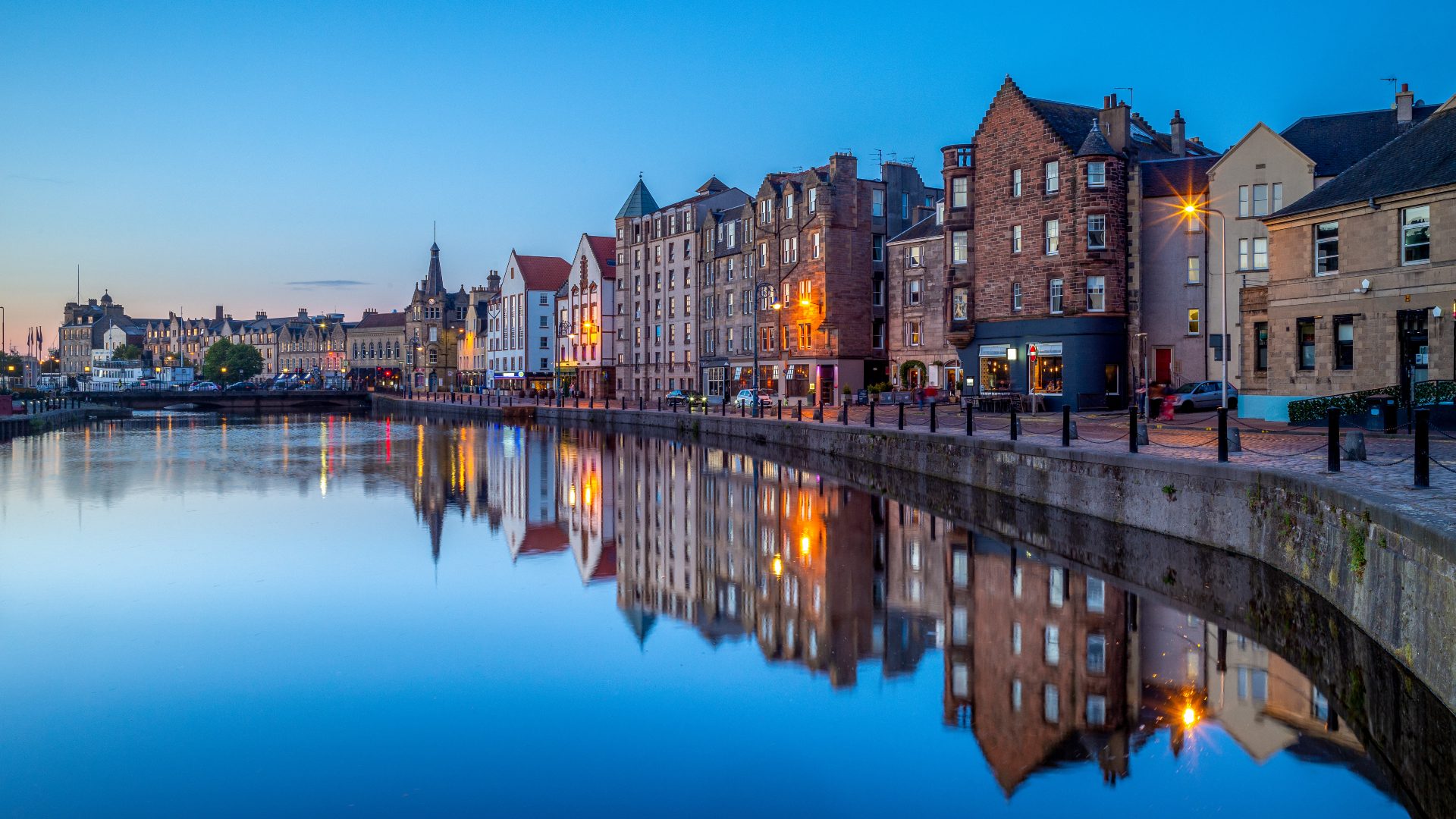 The district of Leith in Edinburgh

Windsor Castle is the world’s oldest working castle, built nearly 1,000 years ago by William the Conqueror. Today, it serves as the weekend home of the King, and it was the location of the wedding of Prince Harry and Meghan.

Many scenes from The Crown are set in Windsor Castle, but the original royal residence doesn’t appear in the series. To see the true filming locations for yourself, head to either Belvoir Castle in Leicestershire or Burghley House in Lincolnshire.

Both are well worth a visit. Belvoir is a reconstruction of a glorious 11th-century castle, built after the Norman Conquest. And Burghley House, which dates from the 16th century, is just as impressive. Of course, you could visit Windsor Castle itself easily as well. 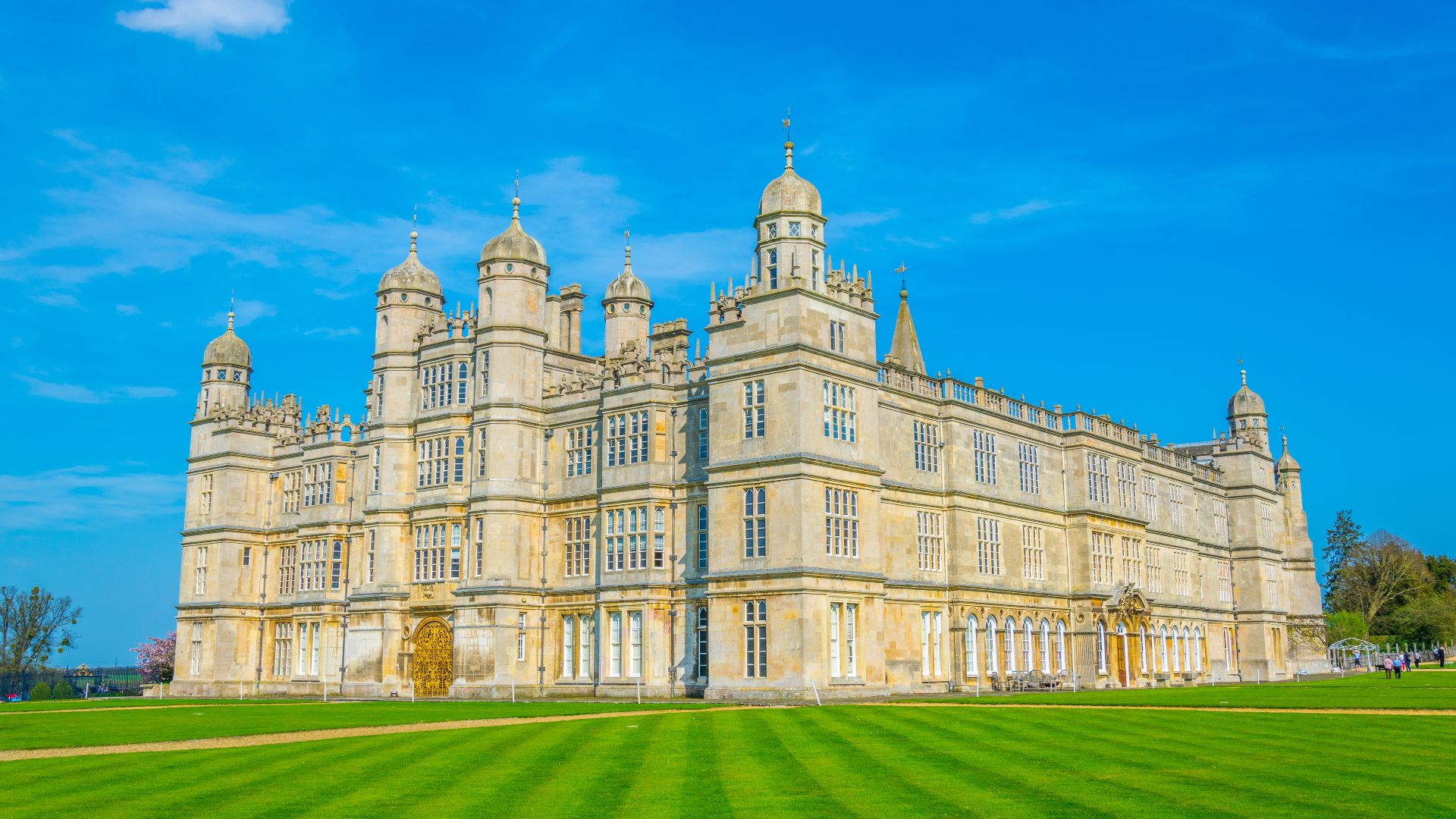 Burghley House, near Stamford in England

Neither a castle nor a stately home, you’ll be forgiven for thinking that Manchester’s Northern Quarter is a little out of place on this list.

But do you remember the final episode of series 4 when Princess Diana takes a trip to New York? Those scenes were shot in this vibrant district of England’s second city.

With its red-brick buildings, cool cafés, and vintage shops, you might find Manchester just as compelling as the city that it stands in for. 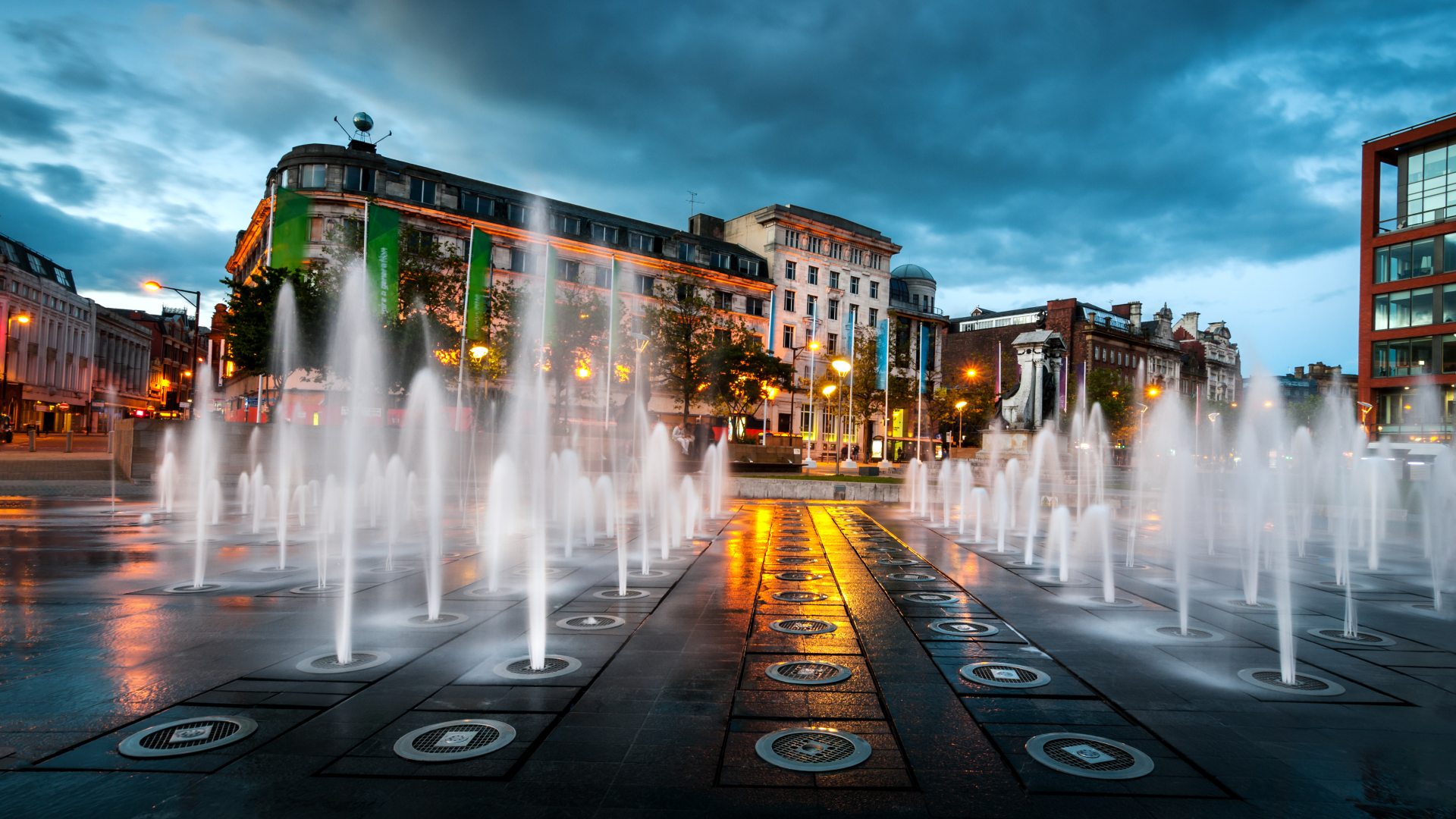 In the heart of London, Buckingham Palace is among the grandest and most famous residences on the planet. That said, as the Royal Family’s official residence since 1837, it’s perhaps understandable that the show couldn’t film inside.

Instead, Lancaster House stood in for most of the scenes set in the palace. A neoclassical mansion built in 1825, Lancaster House is just around the corner from Buckingham Palace and is often open to the public.

Other parts of the palace were played by the Old Royal Naval College, which sits on the banks of the Thames in London. Meanwhile, at Wilton House near Salisbury, the Double Cube Room features in nearly every episode of The Crown. 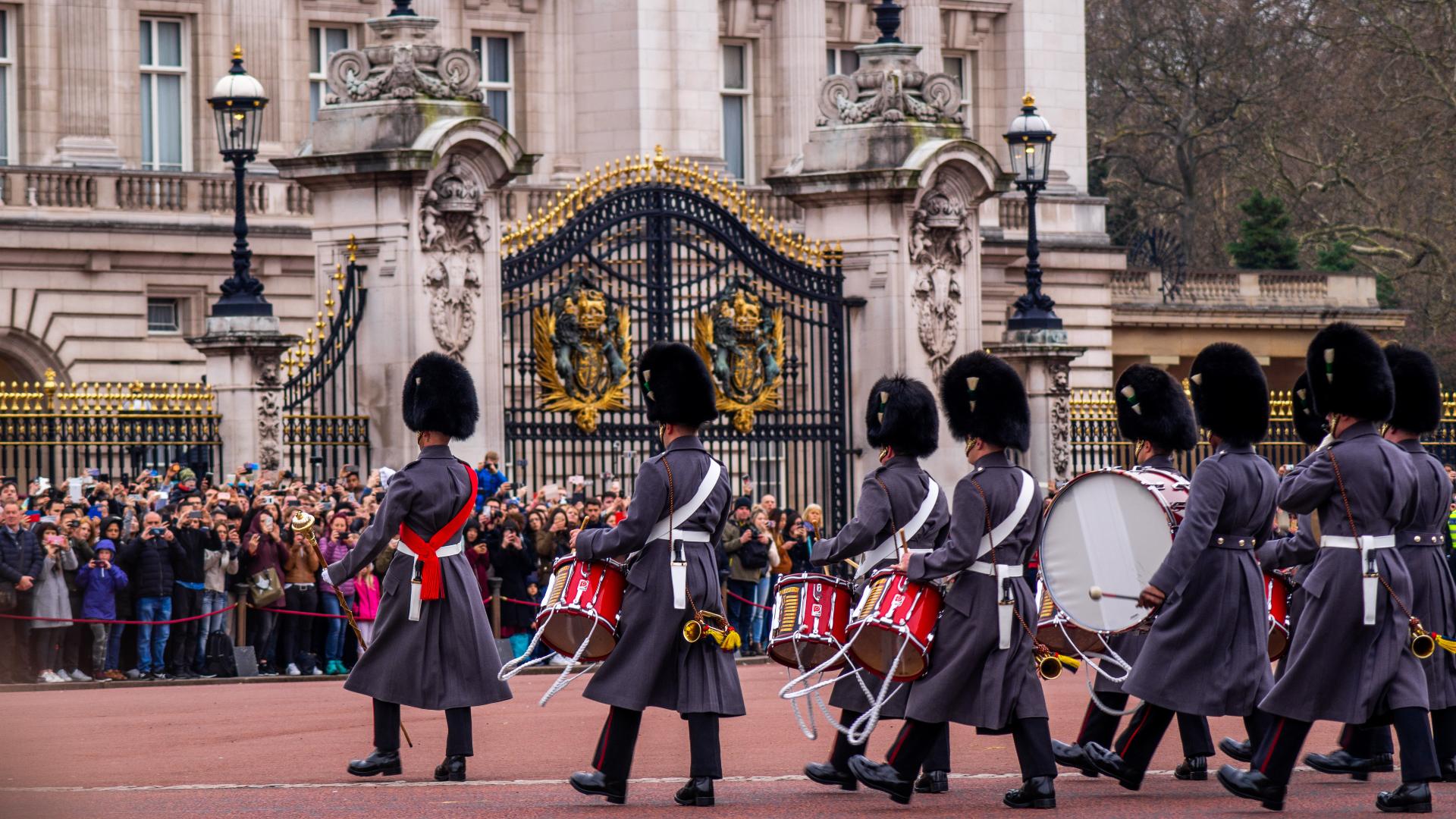 The wedding of Prince Charles and Diana famously took place at St Paul’s Cathedral in central London. The cathedral was designed by renowned British architect, Sir Christopher Wren, back in the 16th century. It’s an incredible baroque structure that’s hosted some of the most important events in the Royal Family’s recent history.

Many of the scenes from The Crown that are set at St Paul’s were shot on location. But when this wasn’t possible an alternative was needed. In this case, the series used Winchester Cathedral instead, in the charming English city of the same name. Dating back over 900 years, this site is just as impressive. 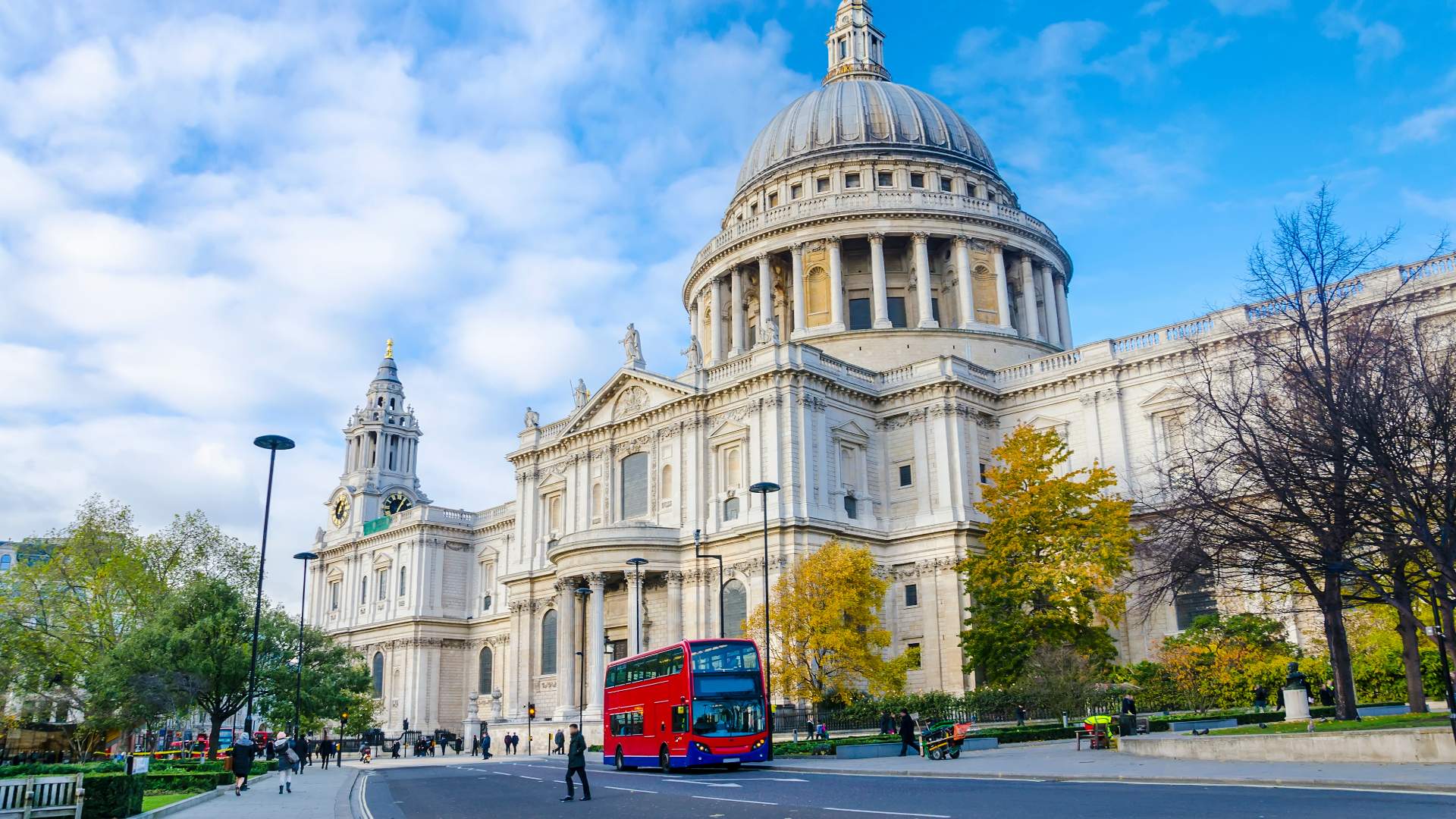 St Paul's Cathedral in the heart of London

4 Royal locations not to miss in the UK

Some of the best royal locations in the UK don’t feature in The Crown at all. But that doesn’t mean they’re any less interesting.

Read on to find out more about the glorious regal properties in Scotland you need to see in real life.

At the foot of the Royal Mile in Scotland’s capital, Edinburgh, you’ll find the Palace of Holyroodhouse, the King’s official residence in Scotland. Built in the 17th century and set within the stunning grounds of Holyrood Park, it’s definitely worth visiting when you’re in the city.

It’s not a place associated only with the Windsors though. Inside you can tour the suites inhabited by the likes of Mary, Queen of Scots and Bonnie Prince Charlie. And don’t miss the spectacular Throne Room, where official visits are made. 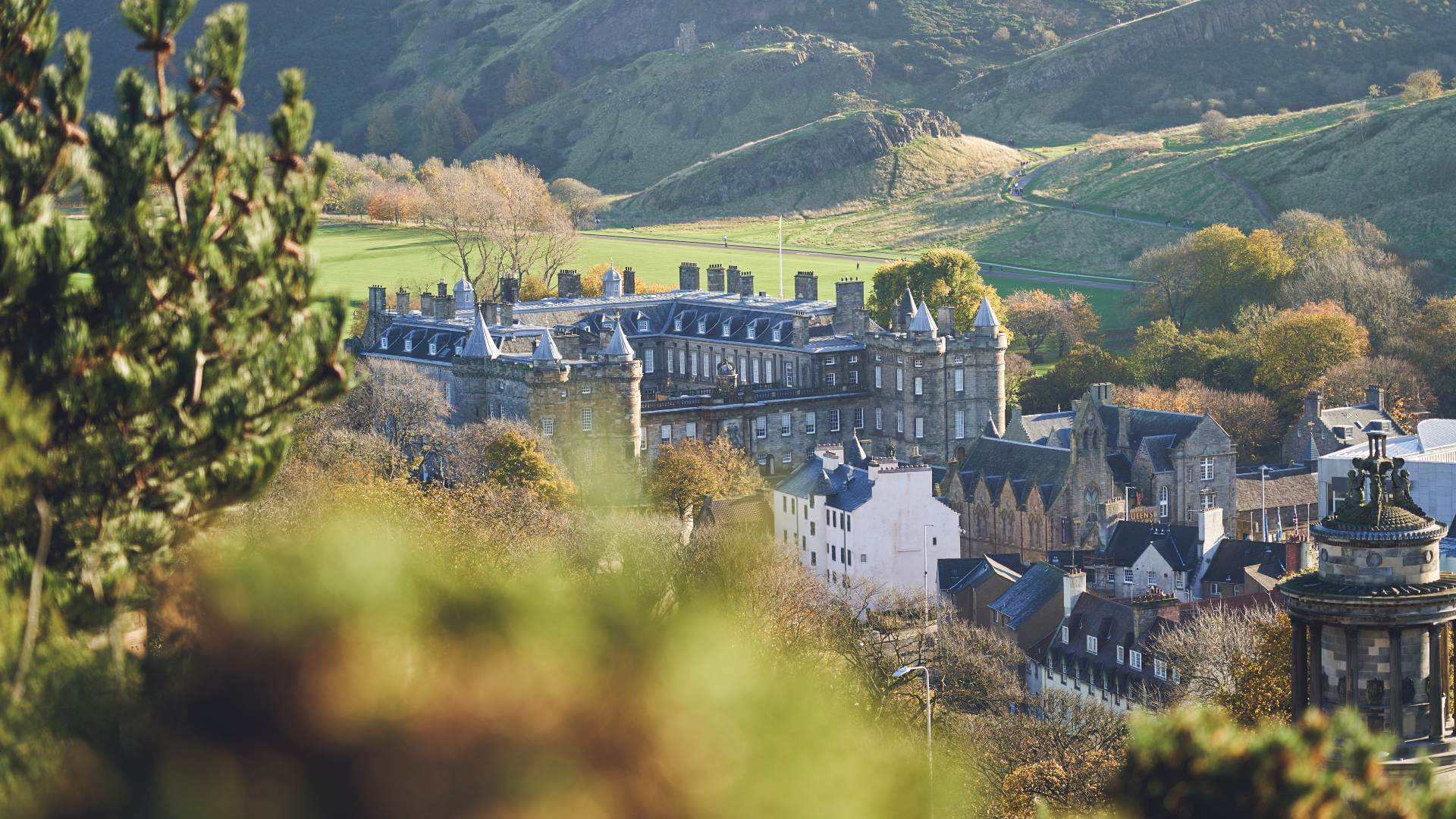 A bird's-eye view of the Palace of Holyroodhouse in Edinburgh

Glamis Castle (pronounced “glams”), set in the Angus countryside, is often described as the most beautiful of Scotland’s castles. Of course, it’s an important royal destination too.

Constructed in the 14th century, Glamis was given to Sir John Lyon in 1372 and has remained in the Lyon family ever since. Lady Elizabeth Bowes-Lyon, better known as The Queen Mother, spent much of her childhood in this splendid castle.

Later, the young Elizabeth II and her sister Princess Margaret enjoyed many summers here too. And if you’re a fan of Shakespeare’s work, you might also recognise it as the location of Macbeth. 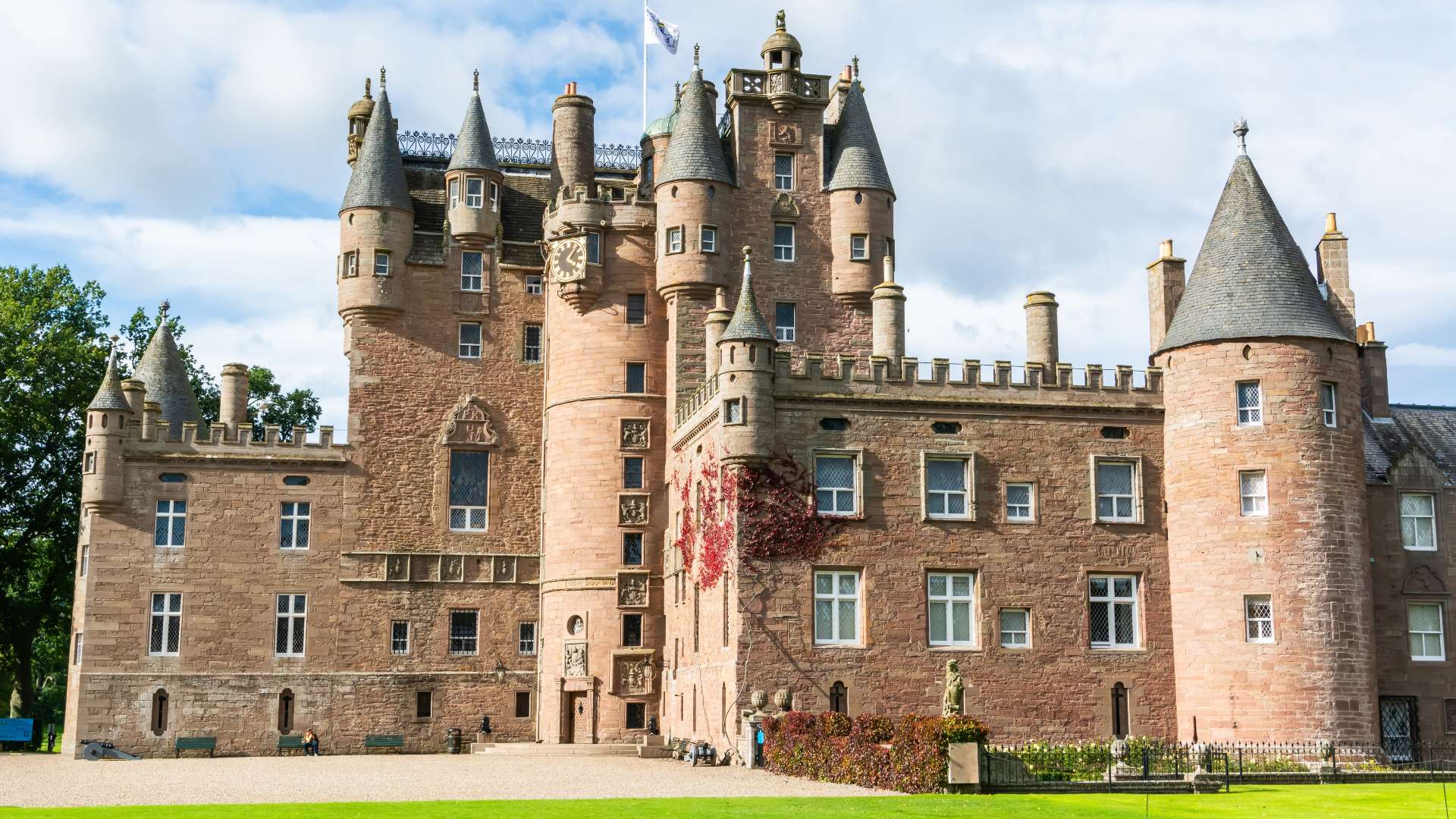 Glamis Castle in the Scottish Highlands

The real Balmoral Castle, set in the wild landscapes of the Cairngorms National Park, was famously the favourite residence of Queen Elizabeth II. It’s also the place where she passed away.

Just outside the delightful town of Ballater, the castle is an immensely historic residence, while still being a working country estate. But it’s not just the castle itself that you’ll want to see on a visit.

Don’t miss the Balmoral Pyramid, for example, a monument to Queen Victoria’s husband, Prince Albert. Take time to explore the castle’s rugged surroundings too, home to some of the UK’s most majestic scenery.

Glas-allt-Shiel, the “widow’s house”, is also on Balmoral Estate and was visited by Victoria when Albert died. Set in one of the most dramatic locations in the Cairngorms, it’s now owned personally by Charles III. 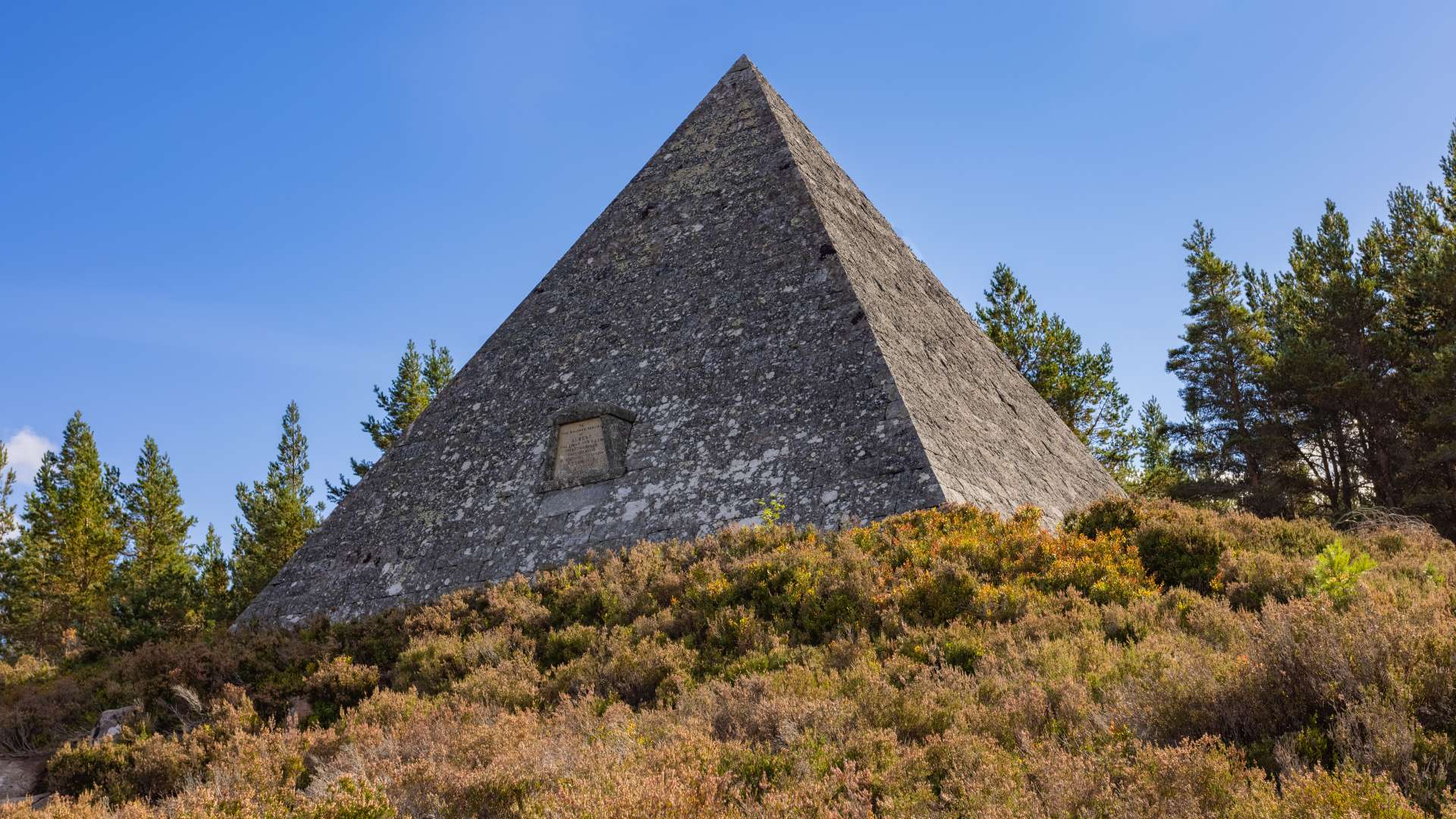 One of the key sites in Scotland’s royal history, Scone Palace (pronounced “scoon”) in the heart of rural Perthshire is where the kings of Scotland were traditionally crowned. That’s because Scone was home to the so-called Stone of Destiny, on which all Scottish monarchs were declared king.

The likes of Macbeth, Robert the Bruce, and even Elizabeth II were all crowned on it. The stone itself looks like an unassuming sandstone chair but it was brought to Scone by the first king of Scotland.

Although the stone now resides in Edinburgh Castle, Scone Palace remains a fascinating place worth exploring. 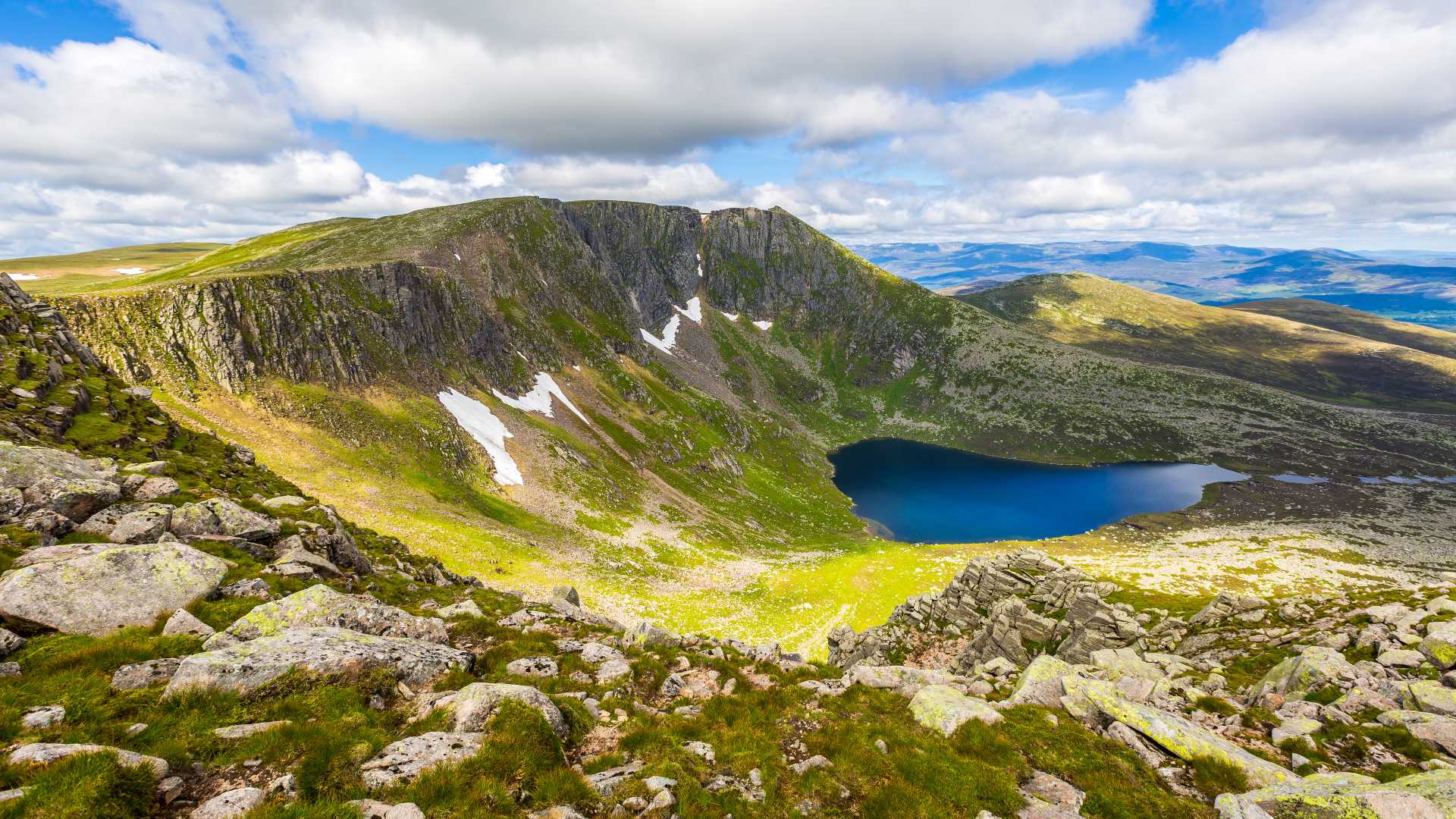 Lochnagar, a Scottish mountain near Balmoral, and a favourite with the Royal Family

Walk in the footsteps of the Royal Family

Visit Scotland and England and experience British royal history for yourself. From The Crown’s filming locations to world-renowned castles and royal residences, there’s so much to explore.

Book a trip with Nordic Visitor and we’ll make your Scottish adventure hassle-free. With a range of tours to choose from, including Scottish self-drive packages and guided group trips in Scotland, we’ll help plan your dream getaway. You can rely on us to handle your accommodation, local transport, and excursions.

What’s more, our Edinburgh-based travel experts will use their local insight to give you personalised attraction recommendations.

Come and walk in the footsteps of the British Royal Family. Contact our team to book your escape to Scotland.

Tags:
Destinations, Scotland, TV and Movies, Things to Do 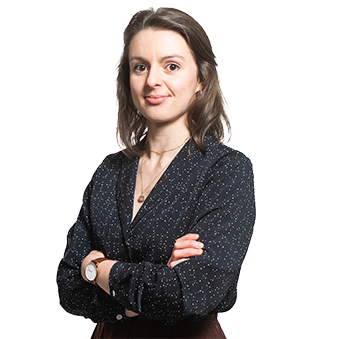 Born and raised in Scotland, Catherine has a background in trip organisation and design. When not travelling, or writing about travels, you can find her rock climbing and exploring remote corners of Scotland. Her top travel experiences include cycling along India’s Brahmaputra River, wandering the souks of Marrakech, and mountaineering in the Alps.

Summer in Scotland Guide: What to Do and Where to Go