5 Incredible Places to see on the Reykjanes Peninsula

Many a visitor to Iceland — and, admittedly, many who are born and raised in the country and live nearby in the capital, Reykjavík — visit the Reykjanes peninsula for one and only one reason: catching a flight at Keflavík International Airport.

The scenery between the capital and the island's international airport is striking, with the churning sea on one side and expansive lava fields on the other, yet an informal poll in Nordic Visitor's Reykjavík office uncovered that the terrain off the main highway is a huge mystery to the vast majority. 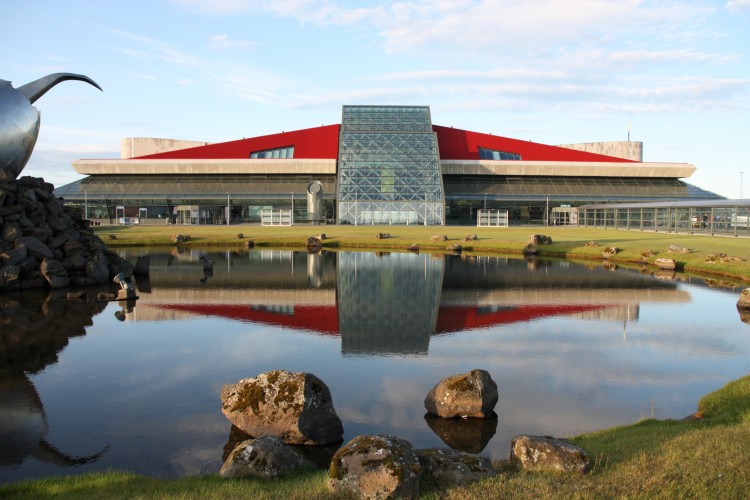 The Keflavík international Airport is the most visited attraction on the Reykjanes peninsula, but the area has so much more to offer!


And that is a massive shame. The place is a UNESCO Geopark, for crying out loud!

In the name of showing the Reykjanes peninsula the love it so deserves, below are 5 incredible things you've got to see on this sizeable spit of land... or 5 reasons to head to Reykjanes even when you don't have a flight to catch:

Kleifarvatn is the largest lake on the Reykjanes peninsula and a sight to behold. The road hugs its shore, with towering mountains on the other side, making the drive alongside the 9km2 lake nearly as enjoyable as stopping to admire it from various vantage points. 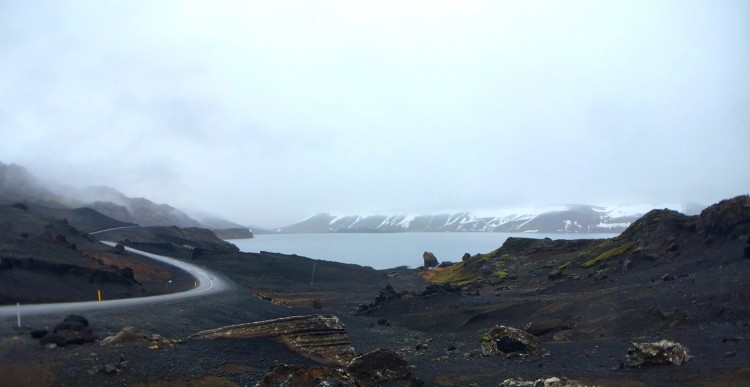 The winding road around Kleifarvatn, as seen from the viewpoint at Syðristapi.


On the day that Nordic Visitor's marketing team visited the weather was dreary, to say the least, but rain and mist somehow made the lake all the more mystical. Stop at Syðristapi, where you can climb atop a massive rock resembling a sea turtle for unobstructed views over the lake and surrounding area.

Fun Fact: Kleifarvatn lost 20% of its volume in 2000, when an earthquake opened a fissure on the lake's floor, causing the lake to drain into the nearby ocean through a subterranean channel. It has since recovered almost entirely.

On a fissure zone created by the separation of the mid-Atlantic ridge running across Iceland lies the large geothermal area of Krýsuvík. Within this area is the stunning Seltún geothermal field, where volcanic fumeroles, mud pots and hot springs have formed. The result of the geothermal activity is a landscape seemingly painted bright yellow, red and green; a result of sulfur interacting with the other minerals in the soil. 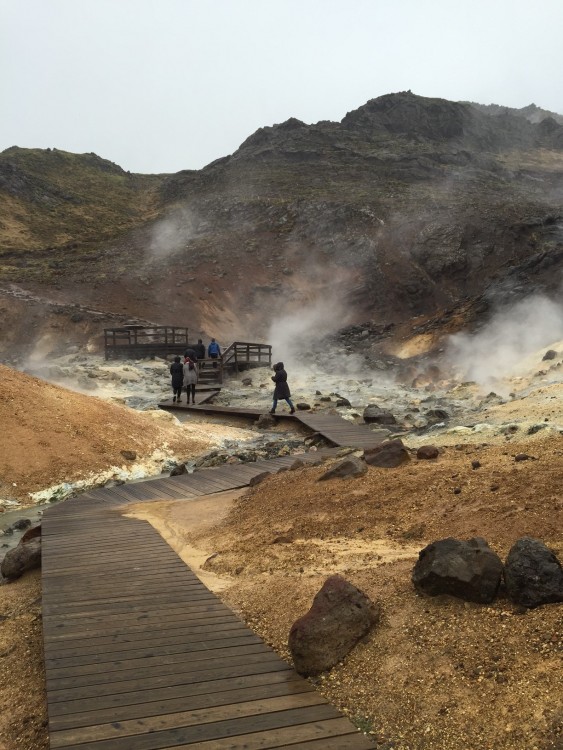 The Seltún geothermal area is an attraction for all the senses... dazzling to look at, with a pungent scent of sulfur.


It is thanks to sites like Seltún (and Gunnuhver further down our list) that a visit to Reykjanes can be called "the smelliest tour in Iceland." The smell of sulfur that escapes from such a geothermally active area is... uniquely pungent.

The southwestern-most tip of the Reykjanes peninsula is called Reykjanestá and is home to stunning cliffs and sea stacks that are constantly beaten by the sea. Alongside the towering sea cliffs is the hill Valahnjúkur, which is easy to climb by a marked path and provides a vantage point over the stunning coastline. 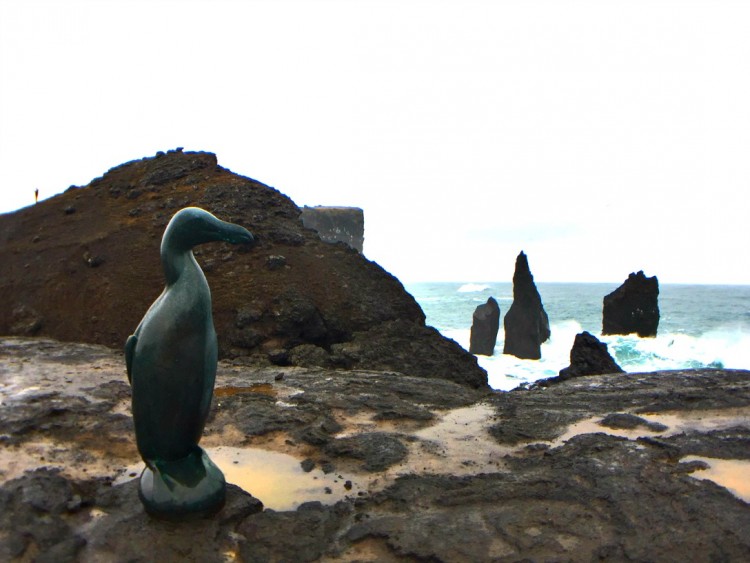 A statue of the Great Auk stands on the cliffs at Reykjanestá, near the location where the last mating pair was killed in 1844. The hill, Valahnjúkur can be seen in the background.


The numerous sea stacks just offshore are home to numerous colonies of sea birds. The largest stack, called Karl and thought to be a troll caught out after sunrise, is home to a large colony of kitiwakes.

Though beautiful to visit, we wouldn't recommend leaving the car during  the nesting season of the Arctic Tern, which are numerous in the area. The birds are notoriously territorial and are very effective when it comes to defending their nests.

Not far from Reykjanestá, Gunnuhver is an area of mud pools and steam vents on the southwest tip of the peninsula. The gases emanating from the ground turn the surrounding lava rock into bubbling clay and the water to acid. Gunnuhver is the largest mud pot in Iceland, and the degree of its activity changes with the change in geothermal and volcanic activity underground. 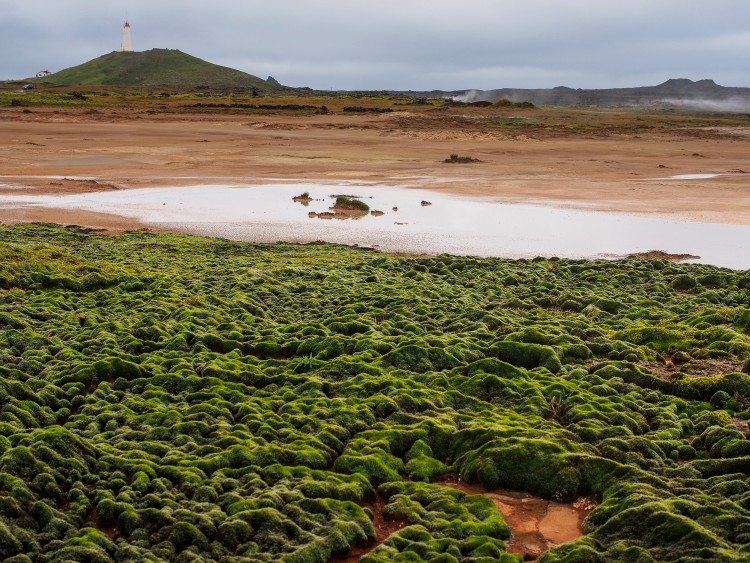 Some say if you listen closely, you can hear howling and screaming coming from Gunnuhver where old Gunna was banished into the boiling waters.


The area was named for a ghost, Gunna, who was said to be causing disturbances in the area until the local priest set a trap for her and she fell into the hot spring some 400 years ago. Yikes!

The many lava fields

The part of Reykjanes that everybody does see — because they're visible from the highway leading to and from the airport — are the lava fields. Reykjanes is one of the youngest parts of Iceland, geologically speaking, and is very volcanically active, so it's made up of several lava fields of varying ages and features.

The rule of thumb to follow when scoping out lava fields is that any field with vegetation starting to grow is likely older than 2500 years. If you can't find any vegetation then that's a young lava field you're looking at.

The many different lava fields that make up the Reykjanes peninsula are fascinating to see when navigating the area.


Since the terrain is made of lava fields of varying ages, driving between the sites listed above gives you the opportunity to venture between old fields, with small trees beginning to sprout, others covered with a carpet of plush moss, and others still that are stark black and seemingly devoid of life. These lava fields, coupled with the differently shaped and textured mountains throughout the peninsula make an excursion around Reykjanes a treat for the eyes.

You can add a day tour around Reykjanes to your existing booking by contacting your travel consultant. Or check out one of Nordic Visitor's flexible self-drive tour packages that can be tweaked to include free time and activities in this area.