Imagine a summer day that never ends, where the sunset is also the sunrise, where people play golf when they should be in bed. Wait, what?

Such a thing is possible when you are in the land of the midnight sun. Visit Northern Europe in summer and you could bask in endless daylight. You see, here in the Nordic countries, our seasonal shifts are a bit extreme.

Keep reading to find out how exactly this phenomenon occurs and where you can witness it for yourself.

What is the midnight sun?

The midnight sun is a natural phenomenon in the Arctic Circle and Antarctic Circle. During the height of summer in these regions, you can see the sun at the local time of midnight, which means it never gets dark.

What causes the midnight sun?

Scientifically speaking, the midnight sun occurs when the Earth's axis is tilted more towards the sun, peaking during the summer solstices. If you’re in the Northern Hemisphere, that’s usually around 21 June each year. In the Southern Hemisphere, it’s around 23 December.

At its peak you can see the sun moving in the sky, but it does not dip completely below the horizon. Depending on how far north you travel, the period of non-stop daylight can last from a single day to nearly five months.

In the town of Longyearbyen in Svalbard, for example, the sun does not set between mid-April and late August. 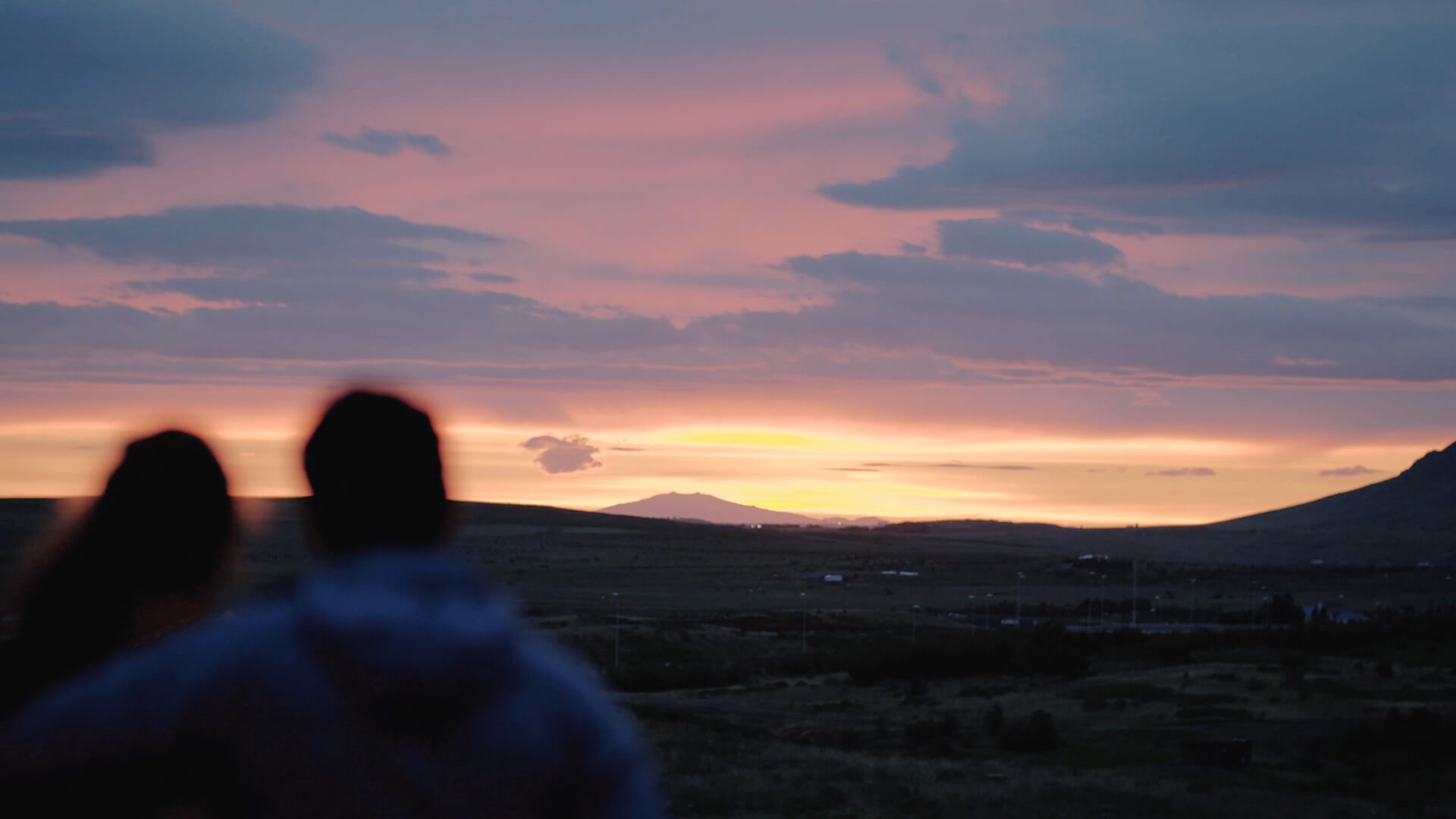 The closer to the North Pole you are, the brighter the midnight sun will be. Further south in the Arctic Circle, such as Northern Norway and Iceland, it appears like a burning sunset in the middle of the night. It is simply stunning and if you are a keen photographer, you will be in heaven!

In areas below the Arctic Circle, but above 60° north latitude, the sun may dip a few degrees below the horizon. However it doesn’t disappear enough for full nighttime darkness to set in. Visit any of our Northern European destinations in summer and you’ll experience these “white nights” to some degree.

Which country is called the land of the midnight sun?

The “land of the midnight sun” doesn’t refer to just one country. It encompasses all of the regions located within the Arctic Circle and the Antarctic Circle. In the Nordic region, you can experience it by visiting Svalbard, Lapland (northern Finland and Sweden), Greenland, Iceland and Northern Norway.

Northern parts of Russia, Alaska and Canada also lie within the Arctic Circle. Meanwhile the land of the midnight sun in the Southern Hemisphere is Antarctica. 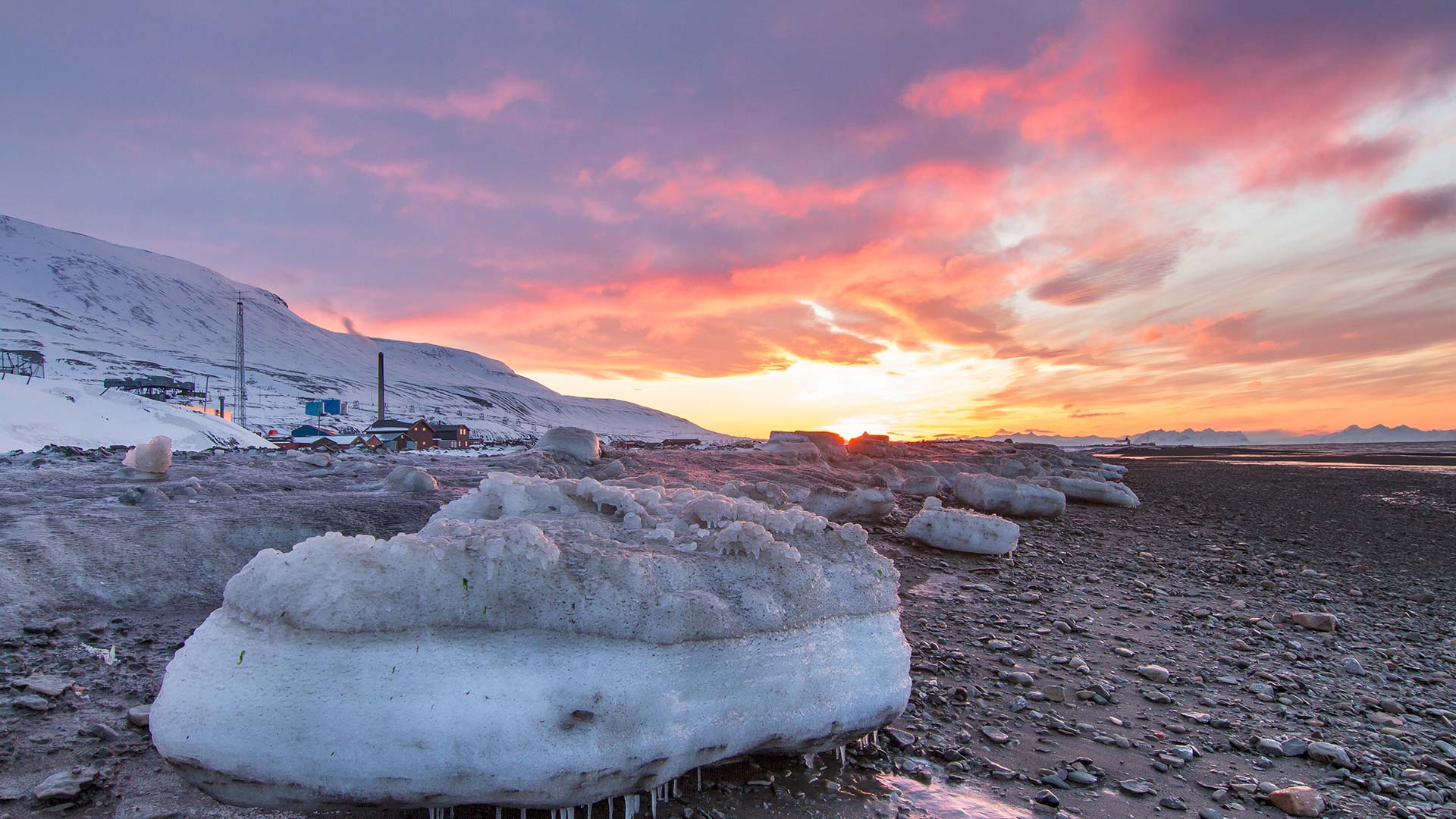 Why is it called the land of the midnight sun?

To summarise, the land of the midnight sun is called so because it is bathed in constant daylight for days, weeks or months on end.

When is the midnight sun likely to occur in the Arctic?

In the Arctic Circle, you can see the midnight sun around the time of the summer solstice in the Northern Hemisphere – 21 June. The further north you go the longer the midnight sun will last, as you are closer to the North Pole.

So in Svalbard – one of the closest destinations to the North Pole you can visit – you would see the midnight sun from mid-April to late August. Meanwhile in Ísafjörður, northern Iceland, you’d catch the midnight sun during the last couple of weeks in June. That’s because it’s further south than Svalbard.

Where can you see the midnight sun?

These are the countries where you can see the midnight sun in the Northern Hemisphere:

Where to see the midnight sun in Norway?

Norway is a fantastic place to see the midnight sun. Head to Northern Norway, located at the top of the mainland, or venture closer to the North Pole by exploring the Arctic archipelago of Svalbard.

You could enjoy a midnight sun cruise around the coast of Northern Norway, whisking you to the Lofoten Islands, Tromsø, North Cape (Nordkapp) and Kirkenes. These are all stunning destinations to bask in the endless daylight hours and photograph the spellbinding “golden hour”.

Alternatively, opt for an intrepid journey to the far, far north and discover one of the world’s great wildernesses: Svalbard. Take advantage of the long days by enjoying extraordinary experiences. Think husky rides, boat safaris to see Arctic wildlife, and a stay at the remote Isfjord Radio Basecamp. 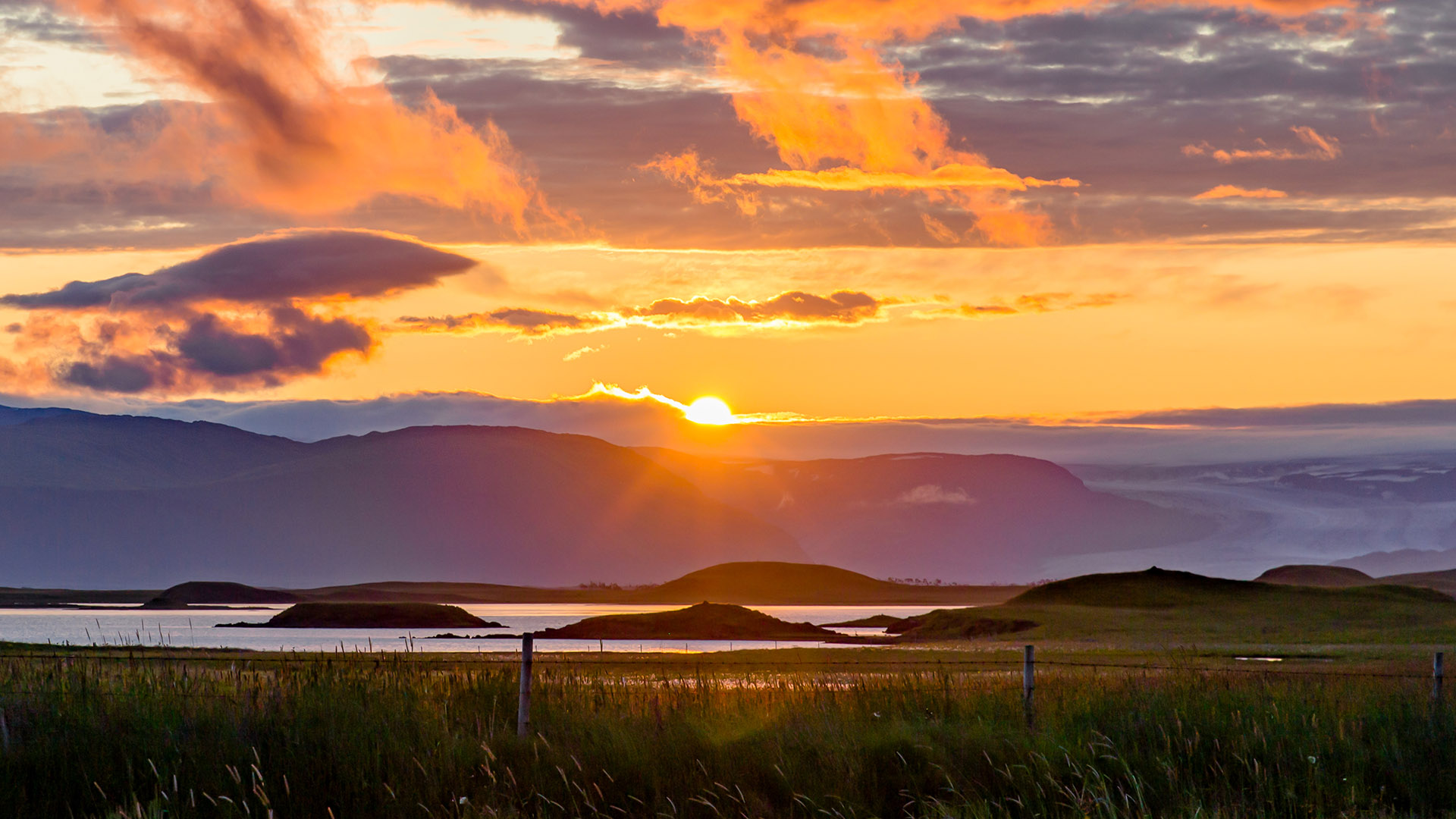 Where to see the midnight sun in Iceland?

As Iceland is a small island country, you can soak up the midnight sun anywhere really! However, the north has slightly more hours of daylight compared to the south. This means you could chase the sunset for a little longer in the Westfjords or North Iceland.

If you’re visiting Iceland in the summer, you’ll have long days to explore many of the top attractions, like the Golden Circle. Or embark on an evening ATV bike safari outside Reykjavík to catch the blazing sky. You’d get to zip around the mountain tracks before admiring the sunset from an elevated viewpoint.

Another option is to have a local guide drive you around the rugged, untouched landscapes of the highlands in a 4x4. You’d reach waterfalls, glaciers, hot springs and volcanic sites that few get to experience.

Where to see the midnight sun in Greenland?

In Ilulissat, the sun doesn’t set at all between mid-May and late July. Here you could enjoy late night hikes in Sermermiut Valley, boat trips to the Sermeq Kujalleq glacier, or kayak rides in glacial lagoons. We highly recommend a Greenland cruise to the Ilulissat Icefjord.

Or how about a spot of whale watching? Look for humpbacks and minke whales from Sisimiut, where the midnight sun lasts from June to early July.

For the ultimate midnight sun adventure, consider combining a tour of Greenland and Iceland. Imagine the dramatic Arctic landscapes, Viking history and endless days that you’d get to experience in one incredible trip. 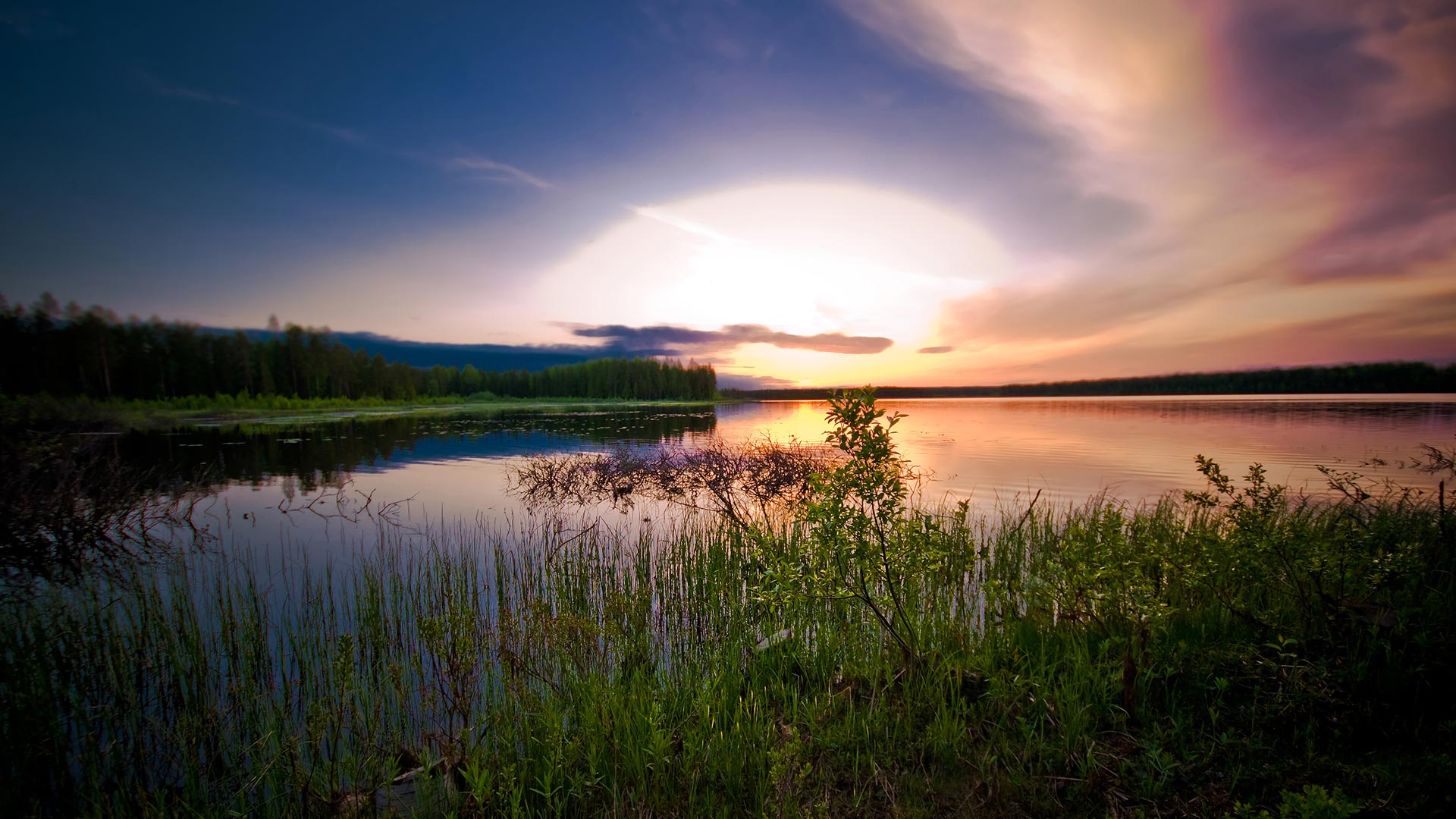 Where to see the midnight sun in Finland and Sweden?

Lapland is a region in both Finland and Sweden, and it lies north of the Arctic Circle. To admire the midnight sun you could visit places like Kemi in Finnish Lapland, or Abisko National Park in Swedish Lapland.

Alternatively, we highly recommend exploring the capitals of Scandinavia in summer. Although you don’t get midnight sun exactly, you have up to 19 hours of daylight to enjoy the cities of Stockholm, Oslo, Copenhagen and Helsinki. You could even pop over to Tallinn on a Baltic cruise.

Summer is a fantastic time to immerse yourself in the fascinating cultures of these close Scandinavian neighbours. Visit in June and you could experience the fun summer solstice traditions too, celebrating the longest day of the year with food, dancing and bonfires.

What to do with all the extra summer daylight?

Here are just a few of the cool things you can do with the long days in the Nordics:

Pro tip: if you're a light sleeper, you may wish to pack a sleep mask for summer visits to the Nordic countries.

How do the daylight hours change?

After the summer solstice, the hours of daylight gradually get shorter by a few minutes each day. Sunsets take place earlier and sunrises later in the day, until the far north returns once again to winter darkness.

The longest nights of the year occur during the winter solstice, which is around 21 December in the Northern Hemisphere. At this time you can witness the opposite to the midnight sun – polar nights. This is when the sun doesn’t rise above the horizon in these same regions located north of the Arctic Circle.

It’s not all doom and gloom though – far from it! The polar night can appear like a beautiful purple twilight which is magical for photographers. Plus, during the Arctic winter you can see the northern lights dancing in the dark skies and enjoy winter activities like snowmobiling and dog sledding.

Whether you want to see the midnight sun in summer or the northern lights in winter, our regional travel experts can help. Based in Reykjavík, Stockholm and Edinburgh, they have unrivalled knowledge of the regions they specialise in. They’ll advise you on the best possible routes and tours to suit you.

Greenland Travel: Top 10 Things to Do