The northern lights are a naturally occurring phenomenon that will bewitch you with their magic. The Vikings believed the shimmering aurora were reflections of the shining shields and armour of the gods. Who could blame them? This dazzling spectacle does indeed look like something out of this world!

Of course, thanks to science, we know the northern lights aren't down to sorcery. To catch them, you need 3 key factors to align at the same time: dark skies, solar activity, and clear weather. You also need to know when and where to see auroras for your best chances of witnessing them on a northern lights tour package.

If aurora borealis sightings are on your wish list, read on to discover the best times and places to see the northern lights.

Unfortunately, the northern lights don’t show up on demand. You can only see the aurora borealis at certain times of the year when conditions are right. That’s why you need to plan your northern lights tour ahead to give you the best chances of catching them.

The best time of day to view the northern lights

As dark skies are one of the key factors for spotting the northern lights, the best time of day to look for them is at night. The darker the sky, the easier it is to discern the aurora’s colours dancing above you.

That’s why northern lights tours take place in the evening. Additionally, many hotels offer aurora wake-up calls should the lights show up in the middle of the night. 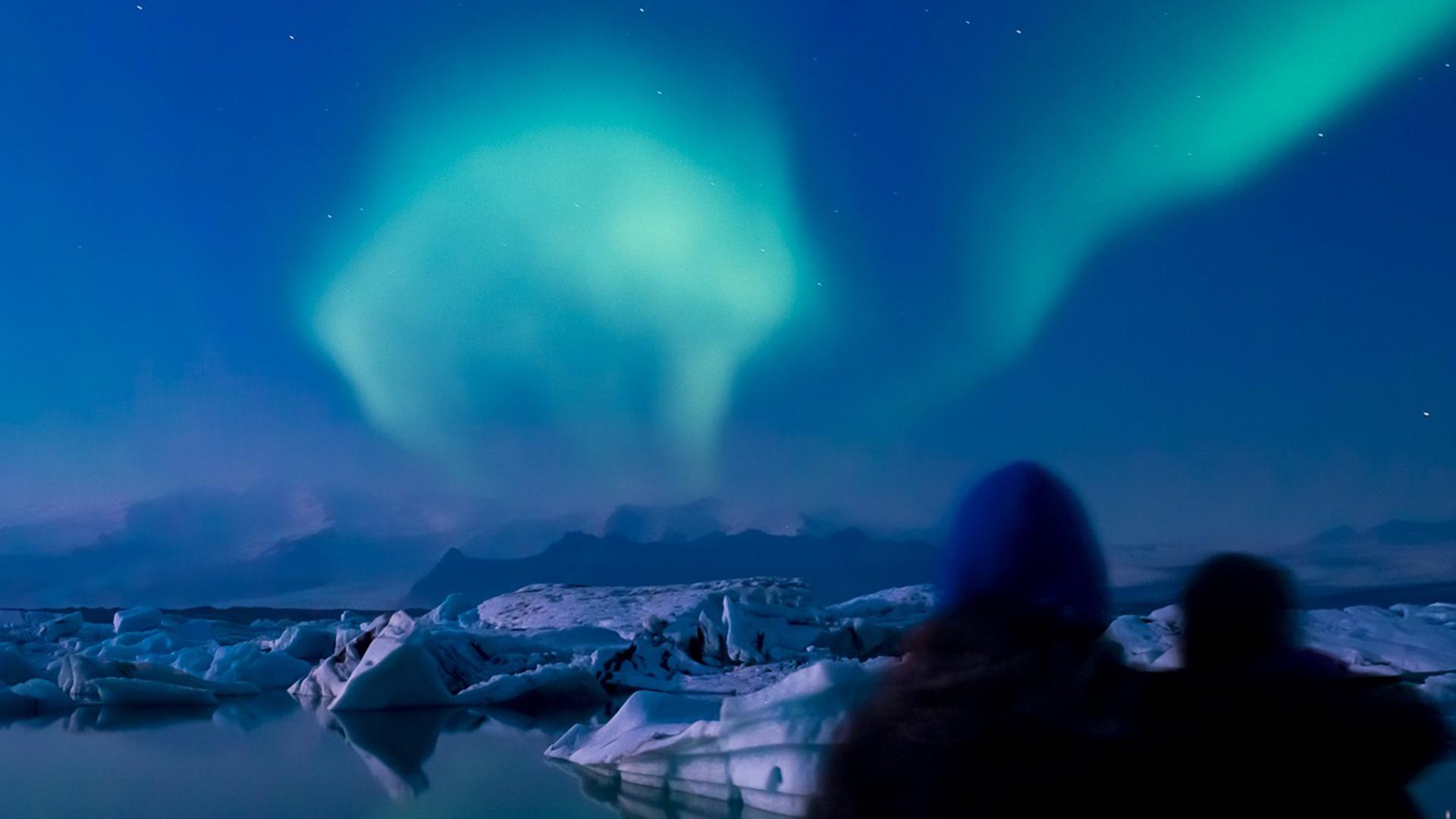 The best time of year for aurora viewing

You are more likely to see the northern lights in winter, between the months of October and April. This is because the night sky is darker in winter and there are fewer daylight hours. You need darkness to be able to spot the colours of the aurora borealis, as they are harder to see in daylight.

Winter in Northern Europe brings long, dark nights, particularly between December and February. In fact, in some regions in the far north, the sun doesn’t rise at all – a phenomenon called the “polar night”. The more hours of darkness then the more chances you have of seeing the aurora borealis.

Winter in the Nordics is a magical time of year for so many other reasons. As well as getting the opportunity to hunt for the lights, you can also enjoy activities in the snow like dog sledding or snowmobiling. You could even stay in a Nordic ice hotel!

In Iceland you can walk through natural ice caves or see dramatic landscapes glittering with frost. Plus, winter is a quieter travel season compared to summer, so visit between October and April for fewer crowds at the top attractions.

Is there a “best year” to see the northern lights?

You can spot the northern lights any year. Essentially there is no “best year” to hunt for them.

Some believe that certain periods of the 11-year solar cycle provide a better chance of seeing the aurora light up the sky. When the sun experiences its solar maximum, that means that solar activity is high and more charged particles are released. This most recently took place in 2014.

That said, geomagnetic storms can occur at any time, so you can still see the northern lights during the solar minimum stage. The aurora borealis is unpredictable so even if you search for them during the solar maximum, sightings are not guaranteed. 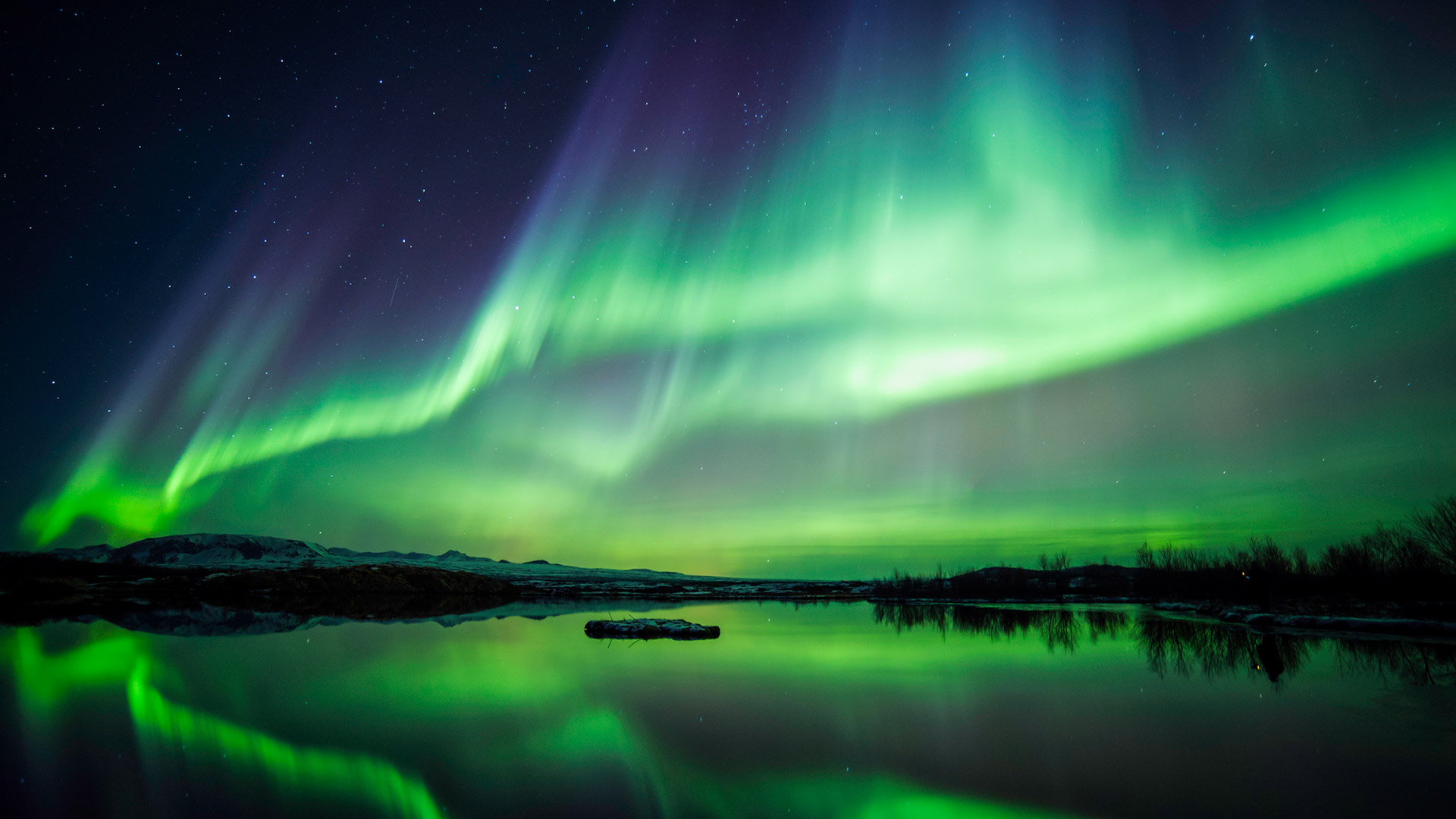 The northern lights are a natural phenomenon that you can witness at far northerly latitudes. You can only see the aurora borealis in the Northern Hemisphere, whereas the aurora australis is visible in the Southern Hemisphere.

Since solar activity is at its strongest closer to the North Pole, you should head to the Arctic Circle to increase your chances of spotting the northern lights.

The best places to see the aurora borealis are the Nordic countries of Iceland, Norway, Sweden and Finland, which lie within or near the Arctic Circle. You could also look for them in Russia, Alaska, and Canada’s northwest territories.

Why are the Nordic destinations ideal for northern lights viewing? Because they are located in the “aurora zone”.

The “aurora zone” (or “northern lights belt”) is a latitudinal oval between 65-72°N. This band is where the most auroral frequency and intensity occurs, so your best bet is to visit this area for northern lights tours.

Iceland and the northern regions of Norway, Sweden and Finland are located within the aurora zone. However, every now and then the belt extends further south when geomagnetic activity is strong. That means you could even see the northern lights from Scotland if you’re really lucky!

Good to know: While sightings of the northern lights are possible in the UK and Ireland, they are too rare for dedicated aurora-hunting missions. We recommend being much nearer to, or actually inside, the Arctic Circle, in one of the locations recommended below instead!

Visit Iceland in winter and you could see the colourful aurora borealis flickering above jaw-dropping scenery. This beautiful country is situated at 65°N, which means it lies within the northern lights belt.

Not only does Iceland’s location make it ideal for aurora viewing, but so too do the wide, open landscapes. With little light pollution, the dark skies of Iceland make aurora sightings more vivid. So although you could actually see them from Reykjavík, we recommend heading out of the city on a dedicated tour.

Some of the best places to see the northern lights in Iceland include the remote Westfjords, North Iceland, and the black sand beaches around Vík. As well as spotting the aurora, there are many more exciting things you can do in Iceland in winter. Think ice caving, bathing in hot springs, and much more! 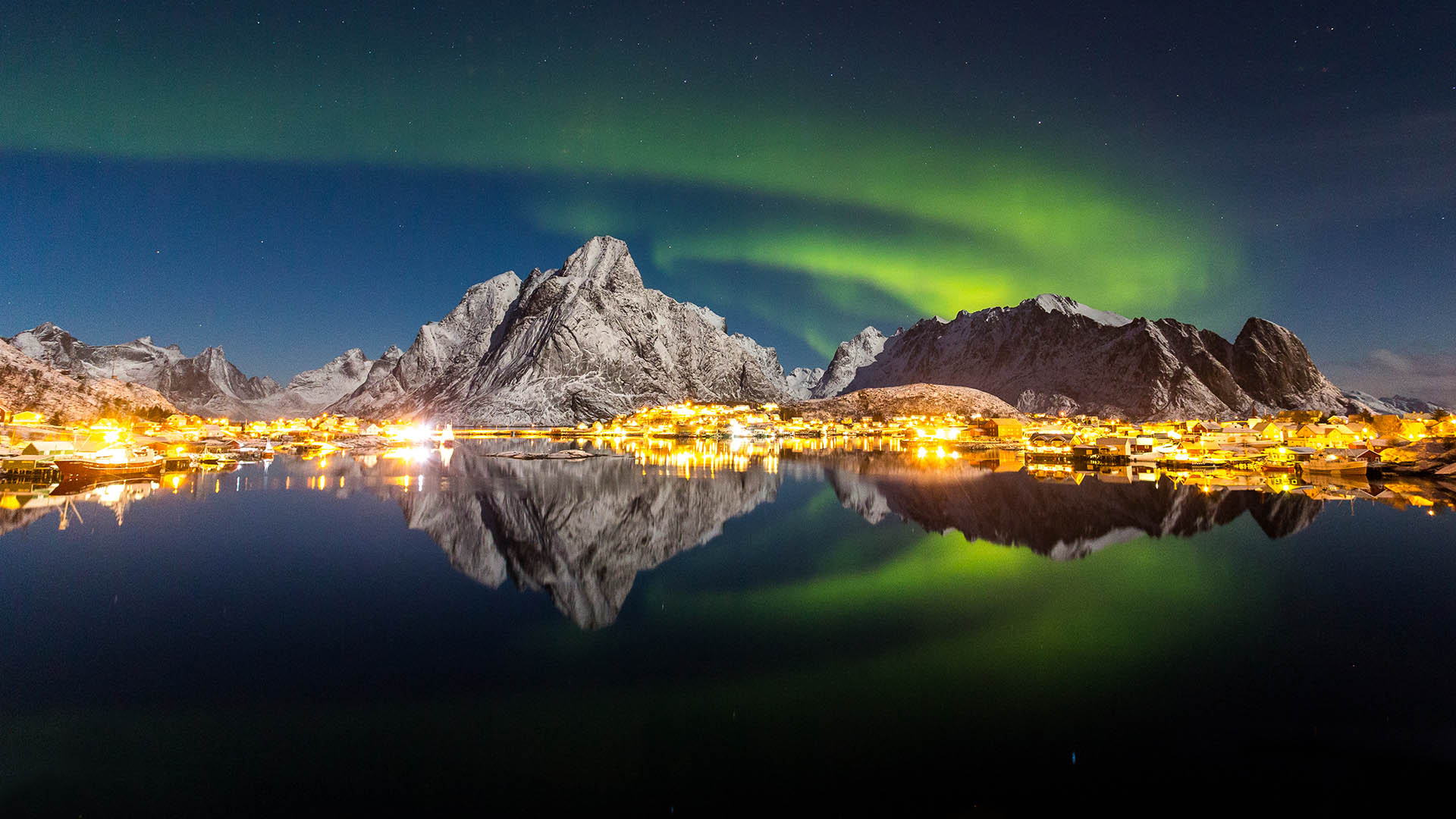 Norway is another stunning Nordic country where you can see the aurora borealis in winter. Northern Norway, in particular, is prime aurora-spotting territory. Journey to this secluded slither of land north of the Arctic Circle to look for the lights dancing in the skies above.

Given the country’s sheer size, it’s good to know exactly where to go in Norway for your northern lights tour. You could travel to Tromsø – the “Gateway to the Arctic” and “Paris of the North”. Venture into the countryside on an aurora safari, or opt for a cruise to see the magical light show from the sea.

Tromsø is one of the places where you can experience the polar night in deep winter, whereby the sun doesn’t rise for weeks. This means more hours of darkness and therefore more time to spot the northern lights!

The polar night also occurs in Svalbard, Kirkenes, the Lofoten islands and Nordkapp (North Cape) – all fantastic aurora hunting locations. What’s more, these destinations offer you a host of winter activities. From ice fishing to staying in snow hotels, there are so many cool things to do in Norway in winter. 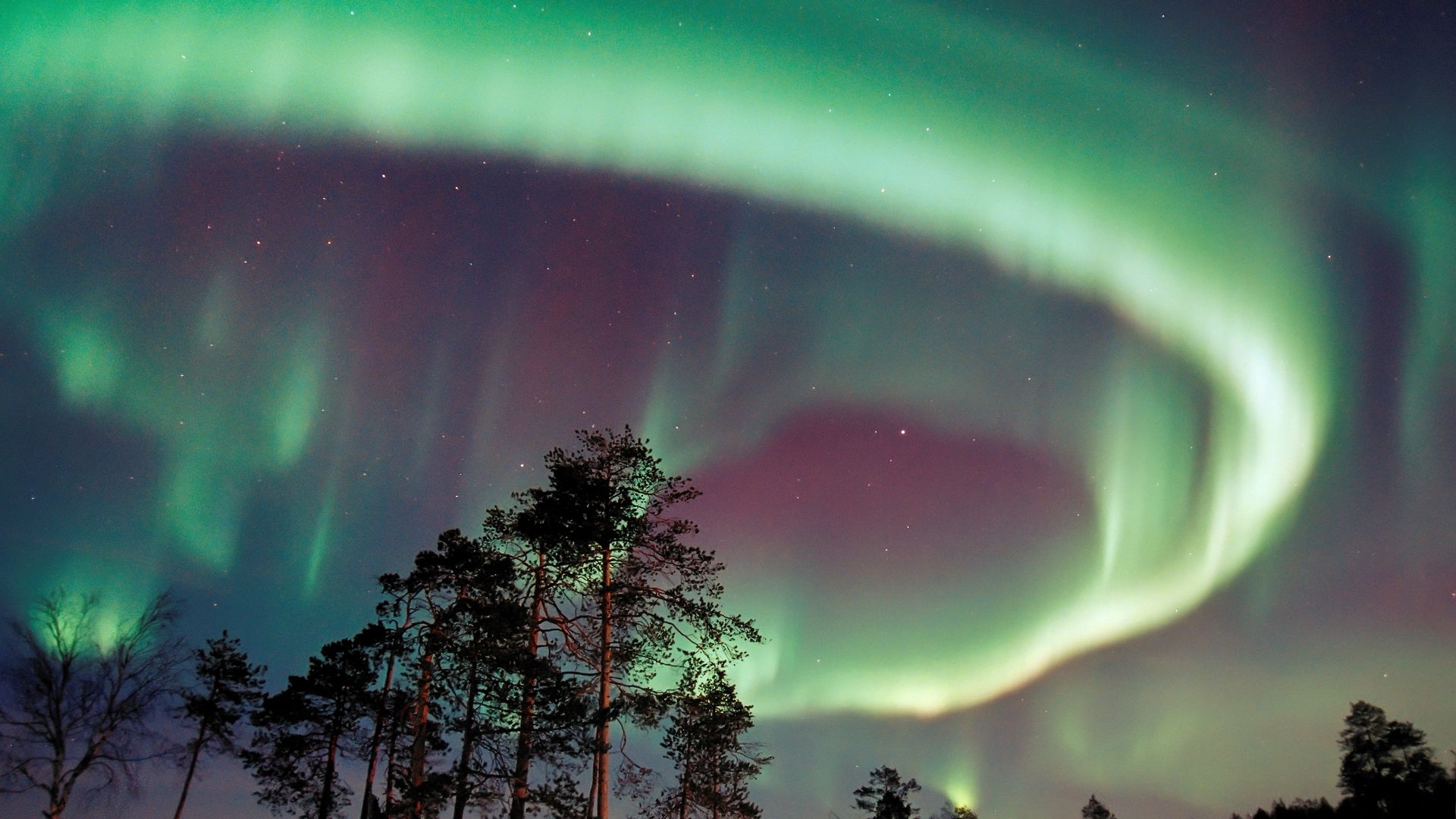 Similarly to Norway, the northern parts of Sweden and Finland are located in the Arctic Circle and northern lights belt, which makes them prime aurora viewing territory. This region is called Lapland, and it spreads across both Sweden and Finland.

Visit Swedish or Finnish Lapland for northern lights tours and you’ll have a good chance of seeing the aurora illuminate the sky. Lapland has everything you need: low light pollution, dark winter skies, and solar activity. When all these conditions combine, the northern lights put on a spectacular show for you!

Some of the best places for you to see the aurora borealis in Lapland are Rovaniemi and Kemi (Finland), and Abisko National Park near Kiruna (Sweden). If you visit the Aurora Sky Station, you’ll get to enjoy a gourmet meal and northern lights exhibition before embarking on a guided tour.

In Lapland there are some really exciting ways you could go on an aurora safari to hunt for the lights. Try snowmobiling, dog sledding or snowshoeing at night. And even if you don’t catch sight of the aurora, these activities are just some of the incredible experiences you can have in Lapland in winter.

When you’re ready to make your dream northern lights tour a reality, Nordic Visitor can help. Our winter travel experts have witnessed the aurora borealis first-hand and will use their insider knowledge to design your vacation package.

So whether or not the northern lights show up for you, expect a winter holiday in the Nordics filled with exciting experiences and unforgettable memories. Get in touch with us to start planning your trip.