What Are the Northern Lights? Aurora Borealis Explained

Have you seen the awe-striking photos of colourful ribbons across dark skies? The northern lights are a magnificent feat of nature that bring awe and fascination to all. If you're wondering how this natural phenomenon occurs, we uncover it all for you.

Below you'll learn what are the northern lights (aurora borealis), how they are formed and where you can witness them at their best.

Introduction to the aurora borealis or northern lights

The northern lights are also called "aurora borealis", or simply "auroras". The "northern" part of the name is because they occur along the North Pole. That said, these lights appear in both polar regions, in the Northern and Southern Hemispheres.

The lights appearing near the South pole are instead called the "southern lights" or "aurora australis". But let's talk more about the northern lights. 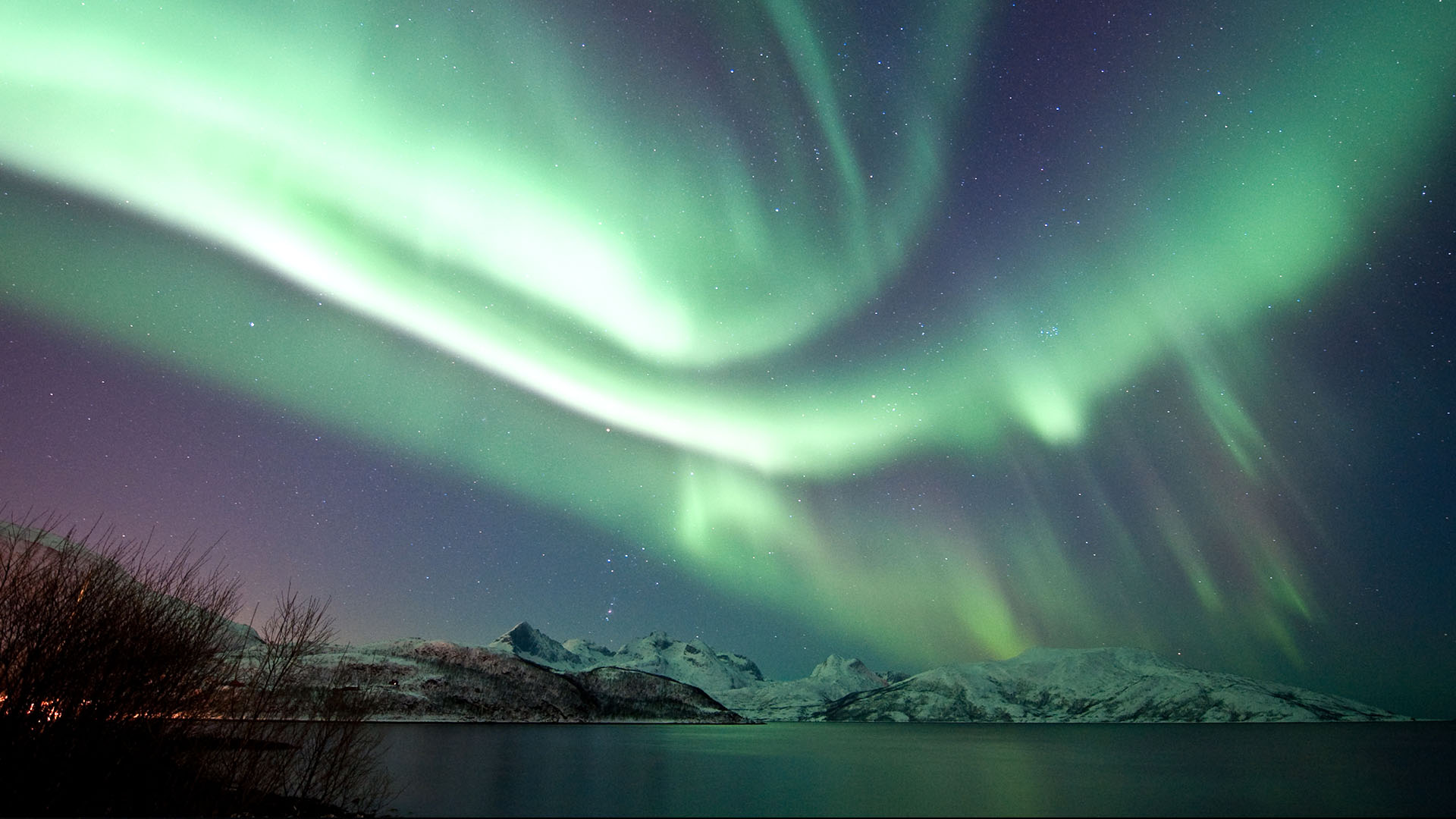 The sightings of these multi-coloured lights in the night sky go back thousands of years. The ancient Greeks and the Romans had many myths associated with the auroras.

The Greeks thought that Aurora was the sister of the sun and the moon. She would appear in the early morning sky to alert her sisters to the new day. The Romans also believed the northern lights announced a new day and thus Aurora was the Roman goddess of dawn.

But what are northern lights in reality? We expand more on that below.

How are the northern lights formed?

The aurora borealis, or northern lights, are created by giant flares from the sun, or solar storms. These happen about 150 million kilometres away from Earth. The flares then send blasts of charged particles towards our planet.

These solar winds take around 40 hours to reach Earth. Once these particles touch the Earth's atmosphere, it creates a reaction. The result: glowing emissions that take the shape of dancing lights in our skies. The northern lights!

Whether you want to believe in the myths behind them or the science, it doesn't take away from the incredible beauty of this light show.

It is good to note that the lights can take on various shapes, movements, colours and brightness. This all depends on the “space weather”. Indeed, what type of atoms are involved, the intensity of the solar activity, and the pull of Earth's magnetic field all have a role to play.

The most common colour you may spot is green. But, if you're lucky, hues of pink, violet and red may appear too. As for shapes, you may see a simple ribbon, arcs, streaming rays or a full rippling curtain. 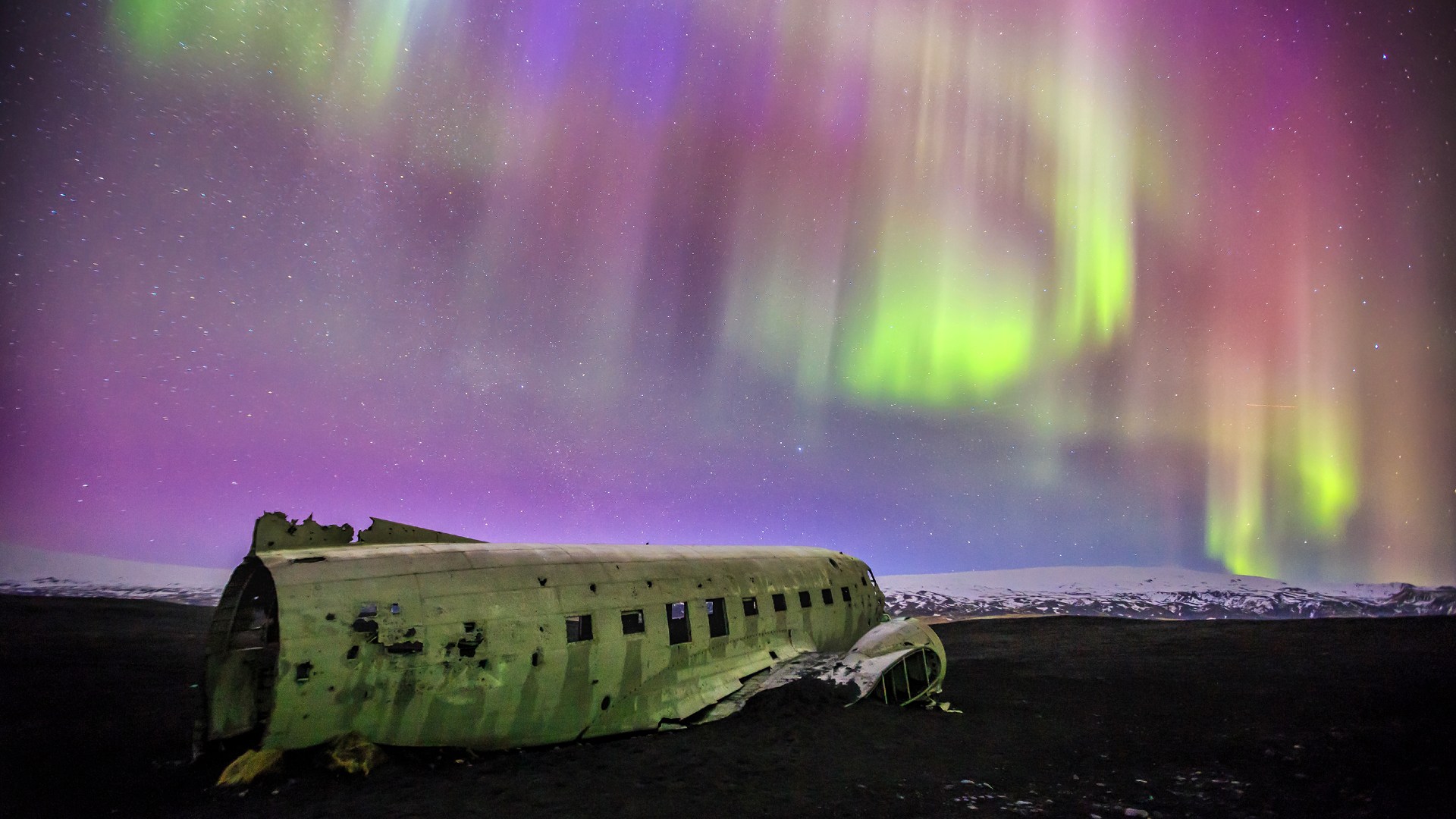 Can I see aurora occurring in summer?

You may be wondering if you'll be able to admire the lights in summer. Truth is, sunspot activity happens all year long. Although it is more intense in winter, the lights still occur in the summertime.

But you'll soon find out that the more north you go, the less darkness there is in summer. With the midnight sun, it means the sky rarely gets dark enough for you to be able to witness the northern lights.

In more southern regions, like Scotland, or even parts of North America, you may be able to. But we recommend visiting in winter and heading north for your best chances.

Where can you see northern lights?

Head to the Arctic Circle to give yourself the best chances of seeing the northern lights. From Lapland to Iceland, the Nordic countries are the best destinations to add to your travel bucket list for this unique experience.

Up here, there is even a region called the “northern lights belt”, an area with a high auroral frequency and intensity. You'll find it between the 65 and 72 degrees north (parallel).

Here are the top destinations for aurora viewings:

Iceland is an excellent winter destination to go hunting for the colourful aurora borealis. This stunning light show paired with the breathtaking landscape of the island will make for an incredible adventure.

Its location just inside the northern lights belt, but below the Arctic Circle, is ideal. It means plenty of darkness to chase the lights, with some daylight hours to sightsee and take part in fun activities. 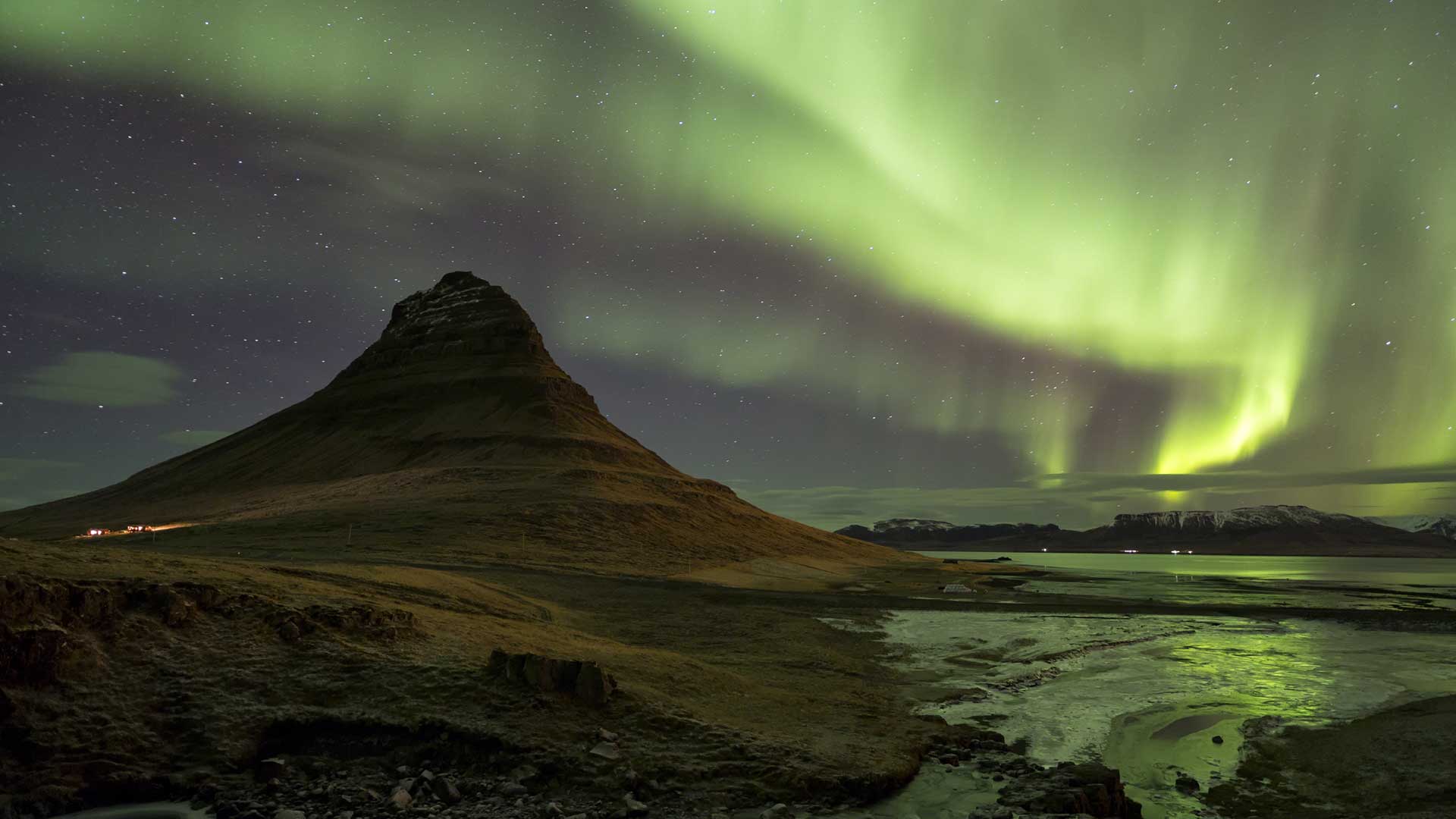 Light pollution is also very low in Iceland, which makes for even more vivid aurora sightings. You may even be able to see them from the capital, Reykjavík. But we really do recommend heading out of the city for a better viewing experience

Some of the best places to catch sight of the northern lights in Iceland include the Snæfellsnes peninsula, North Iceland, and the black sand beaches around Vík.

Norway is a Nordic country that spans a great length, from Oslo in the south to the remote archipelago of Svalbard inside the Arctic Circle.

While the whole country makes for a memorable winter getaway, we recommend Northern Norway to witness the northern lights. Journey inside the Arctic Circle and keep an eye on the sky.

At that time of year, this region of Norway experiences a polar night, which occurs when the sun doesn't rise above the horizon. This means more hours of darkness and therefore more time to spot the northern lights! 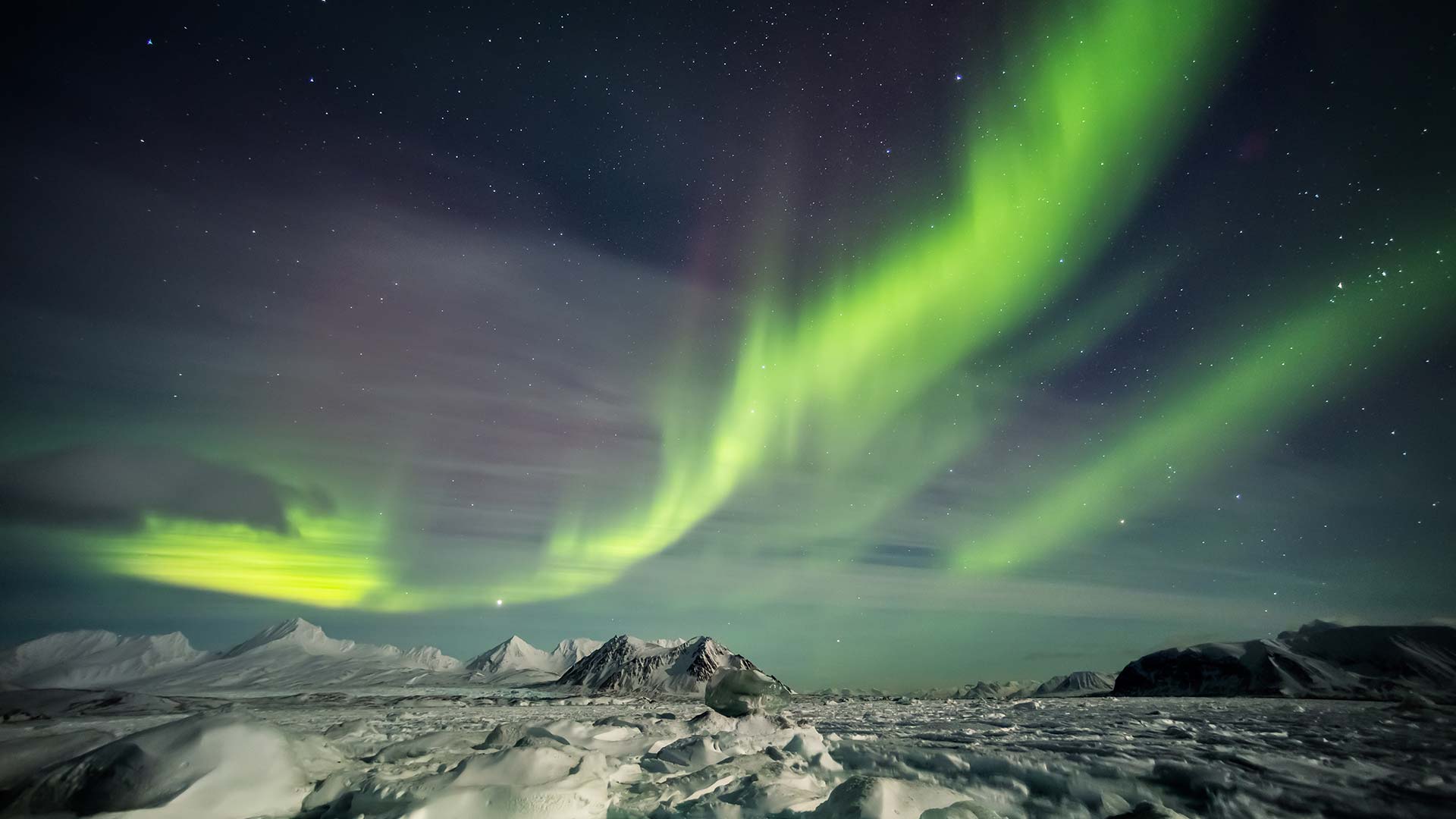 Travel to Tromsø, the “Gateway to the Arctic”, for an exciting northern adventure. Venture into the countryside on an aurora safari or opt for a cruise to see the magical light show from the sea.

Other worthwhile destinations in Norway include the northern town of Kirkenes, the Lofoten islands and Nordkapp (North Cape). On top of being fantastic for light sightings, you could also partake in an array of fun winter activities. Imagine trying ice fishing or staying in a snow hotel.

Lastly, we can't mention Norway, without recommending a tour to remote Svalbard. This archipelago is located far north, halfway to the North Pole. It is a truly unforgettable location that few get to visit.

For a getaway to an untouched region, this is your ideal destination. From the settlements, you could go on excursions onto the frozen landscape and maybe spot some of the local wildlife, including the elusive polar bear.

Lapland spans the northern parts of Sweden and Finland and so is separated into Swedish Lapland and Finnish Lapland. Like Norway, parts of this region are located inside the Arctic Circle and the "northern lights belt", making them prime aurora territory.

Visit Lapland between December and March and you're in for a winter wonderland. Not only is this because of the chances to see the northern lights, but because of its snowy and magical landscape. And what's more? You could even meet Santa! This region has it all.

What makes Lapland so good for northern lights? The combination of dark winter skies, solar activity, and low light pollution. These are the best conditions for the northern lights to put on a spectacular show for you.

Some of the best locations in Lapland to see the aurora borealis are Rovaniemi and Kemi (Finland), and Abisko National Park near Kiruna (Sweden).

Tips to see the northern lights

To have all the odds on your side, follow these simple tips to be able to witness the northern lights at their best. But always remember that they are a natural phenomenon and therefore sightings cannot be guaranteed!

As mentioned previously, heading north into the Nordics will give you the best chances of seeing the aurora borealis. Especially if you visit the auroral zone known as the “northern lights belt”.

The best way to see the lights are in the dark northern skies. For that reason, it is best to come in winter when darkness sets in, especially inside the Arctic Circle.

The regions this far north usually experience the midnight sun in summer. This means the sun does not set below the horizon. Even though there is solar activity all year long, it would make it difficult to see the lights.

While you're at your Nordic destination, check the weather and aurora forecasts to stay up to date. The one we recommend for Iceland is the MET office. You'll easily find one for each country in Northern Europe.

These forecasts can alert you if chances of northern lights are high on the night. That way, you'll know if you should head outside or stay warm in your hotel.

Peak time to spot the northern lights in the night sky is usually between 11 PM and 2 AM. Many aurora tours will go out at late hours for that reason.

Some hotels in Iceland and Scandinavia offer wake-up calls should the lights come out and you're sleeping soundly. 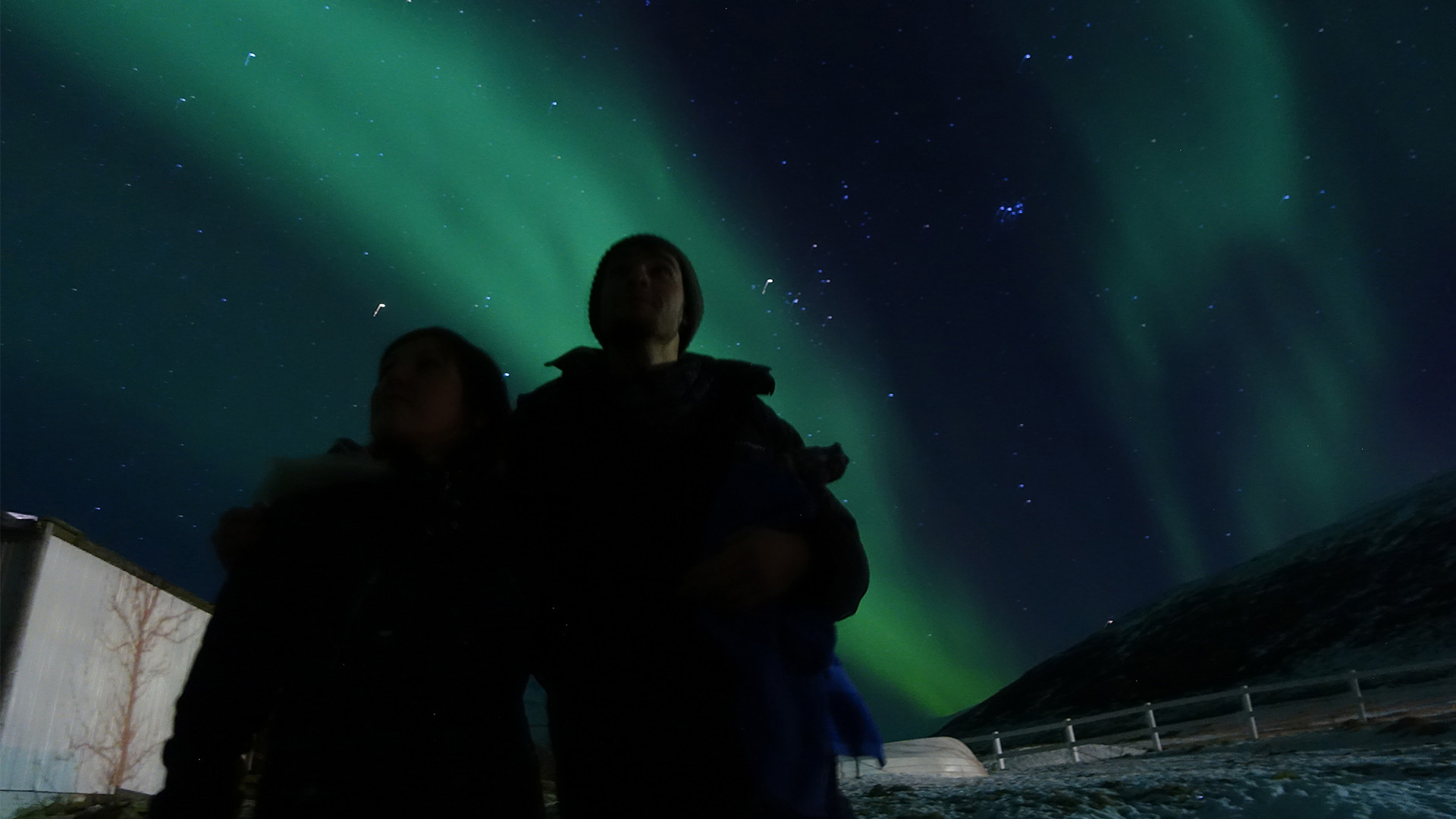 As the aurora borealis are a naturally occurring phenomenon, sightings can't be guaranteed on any schedule.

It doesn't mean it's not worth going out of your way to spot them though. Many northern lights tours will involve some kind of activity or refreshments to keep you entertained and warm as you patiently await the light shows.

If you're going to be staying up to try chasing the lights at night, you'll want to be warm. This way your experience won't be spoiled by the cold night temperatures and north winds.

We especially recommend thermal layers, such as wool. You'll also want to pack some warm gloves and hand warmers, so your hands aren't too cold to take some stunning photos.

Hopefully this has given you a better idea of what is aurora borealis and how the northern lights are formed. If you want to experience them first-hand, at their best, we hope you'll know where to go.

When you're ready to plan a spectacular winter getaway up north, browse our northern lights tours or get in touch with our travel consultants. Based in both Iceland and Scandinavia, our local travel experts can help you make the best of your time in the Nordics. 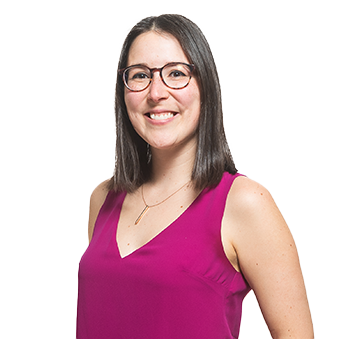 How to See the Northern Lights: Viewing Tips