By: Jenna
Last Updated: 01/07/2021
Posted in: Blogs, Iceland, A little something about, Our Favourite, Destinations, Guides, Things to Do

Iceland, island country located in the Northern Atlantic, is known affectionally as the Land of Fire and Ice. But did you know that this volcanic and rugged nation isn’t made of only one large island? There are another 30-40 islands off its coast.

For example, you have Grímsey to the north of Iceland. Or there's Viðey, an island off Iceland’s capital. There is much to discover about all these islands and more. During a memorable private tour of Iceland, you could explore one or many of them, depending on your chosen itinerary.

You could take a day trip to an island, or spend an afternoon roaming a remote Icelandic isle. To get an introduction and provide some inspiration, read our guide to 6 of the best islands in Iceland.

Viðey is the largest island in Kollafjörður, the bay off Reykjavík’s north shore.

During the summer it can be a popular place to watch birds and visit its lovely beaches. You could also hire a bike or walk around the island following the scenic trails. In winter, however, the island has a very different type of attraction.

On 9 October 2007, artist Yoko Ono unveiled her Imagine Peace Tower on Viðey. It is a permanent installation from which a tower of light is projected into the sky. The base is a white stone monument carved with the words “imagine peace” in several languages. 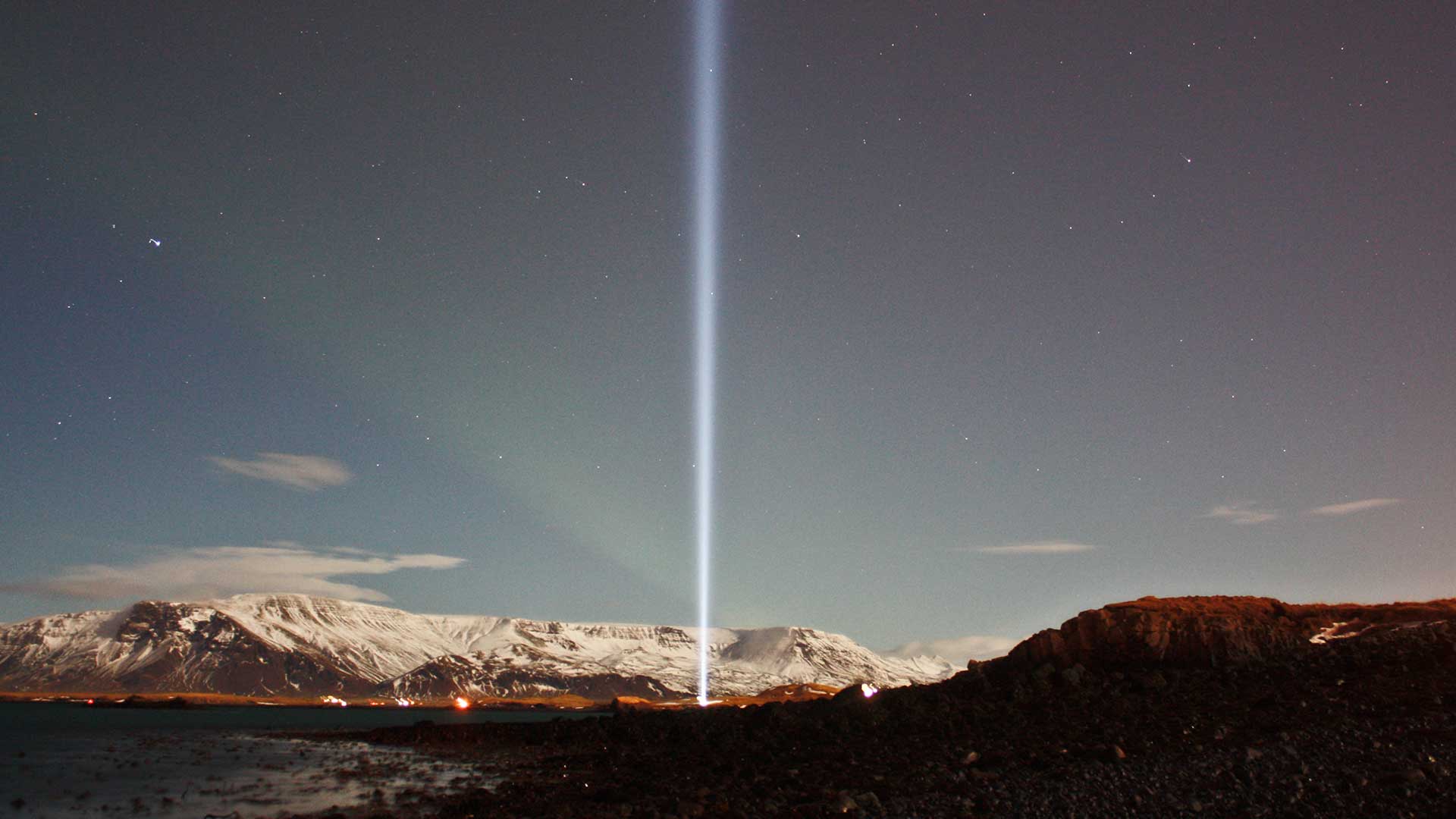 Created in John Lennon’s honour, it is lit every year from Lennon’s birthday on 9 October through to 8 December, the day he died.

Best way to visit: Interested in visiting this fantastic island? It’s an ideal location for a day trip or even half-day trip during your time in the Icelandic capital.

Even if you’re only in town for a short city break, you may have time to pop along to Viðey. Admire the views over the mainland and spot the Snæfellsnes peninsula in the distance.

The island is easily accessible via a daily ferry. You could hop on from Harpa, the old harbour or the slightly out of town Skarfabakki. It takes between 10 and 20 minutes depending on the port.

Ferries run all year long, although in winter they are reduced to weekends only. The ferry is free if you have the Reykjavík City Card.

Flatey, which indeed means flat island, is the largest of the Western Islands. This is surprising when you learn it is in fact very small, measuring only 2 kilometres by 1 kilometre.

In the summer, Flatey is a popular spot for visitors from Iceland and abroad. You can view the island’s many well-preserved old houses and walk along the one road of the island. There are a few shops and restaurants open at this time of year too. 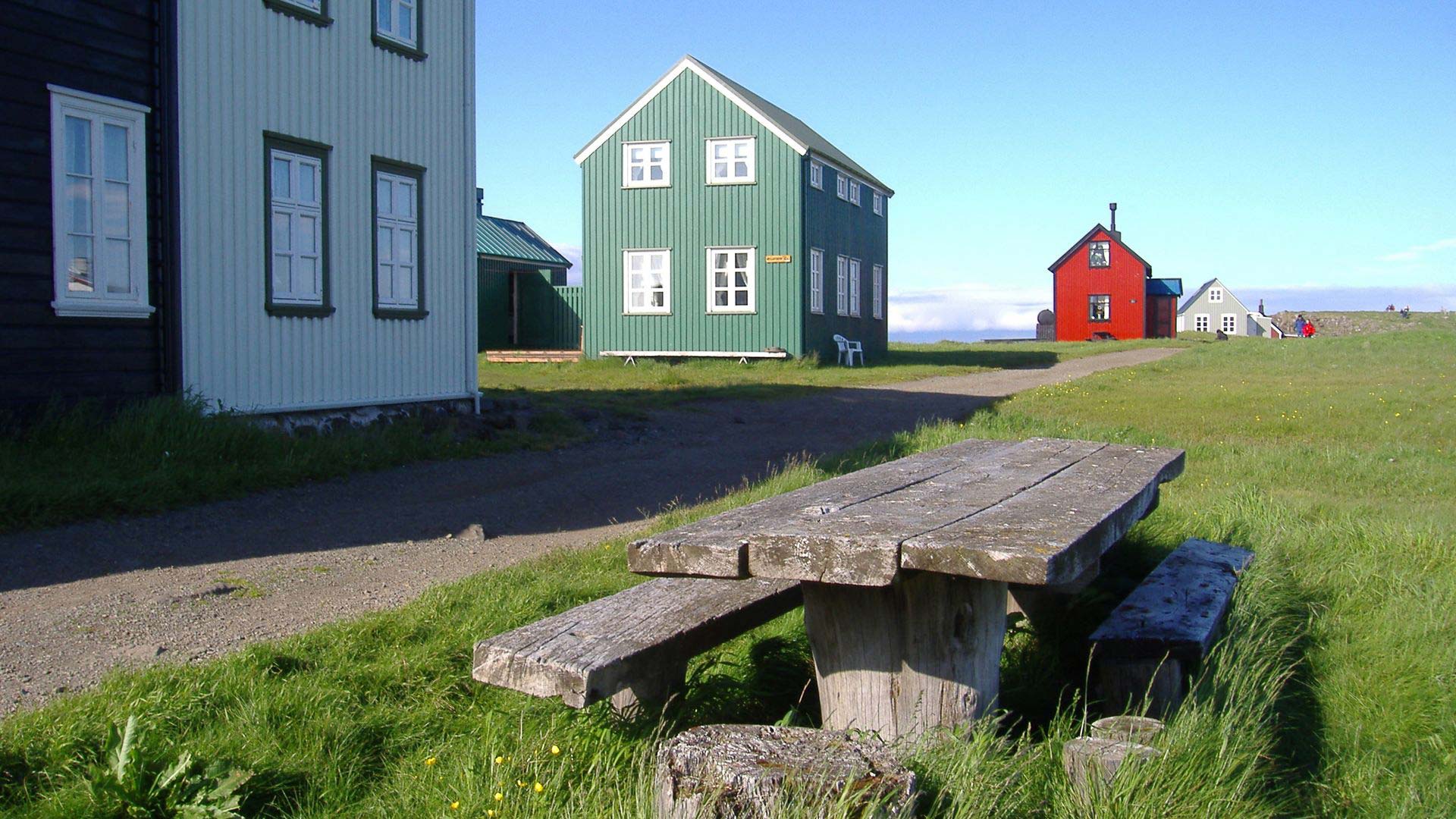 A short visit will most probably be enough to see the beauty of the island, but you could also stay longer. This would allow you to visit in more depth, discovering the nature reserve and wildlife sanctuary. Make sure to spot the colourful puffins!

There are no cars on the island, making it peaceful and walkable.

Best way to visit: Take a half-day trip during your visit of West Iceland. Board a ferry for Flatey from the Snæfellsnes peninsula. It takes about 1h30 to reach the isle from the Stykkishólmur harbour.

You could also pop by if you’re doing a full circle road trip of Iceland and visiting the remote Westfjords. A 1-hour ferry is available in summer from Brjánslækur. This journey will take you through the beautiful Breiðarfjörður fjord.

Located in North Iceland in the Eyjafjörður fjord, Hrísey is the country’s second largest island. If you’re not visiting, you should be able to spot it from the boat on the way to Grímsey.

Originally established as a Viking settlement, today it is a protected natural area. The island is a breeding ground for around 40 species of birds, including ptarmigan and ducks. Why not take some time to spot them?

Hrísey is a great place to try a guided tractor ride to hear directly about the island from a local. Or you could explore by yourself and walk along one of the marked nature trails.

Other fun activities to do here include dipping your toes in the local thermal pool and visiting the House of Shark Jörundur. The latter houses an exhibition about the island and the history of shark fishing in Iceland in the old days.

Best way to visit: Hrísey is very accessible as a day trip from Akureyri. Drive 30 minutes or take a bus north to Árskógssandur before boarding a 15-minute ferry to the island.

You could also take a ferry from Dalvik, the same port as for Grímsey, but this one is less often.

Grímsey is the northernmost inhabited part of Iceland. It is located partly inside the Arctic Circle, 40 kilometres (25 miles) north of the mainland. It is a beautiful, rocky island that not many people get to visit.

One of the best activities to partake in on Grímsey is bird watching. Thanks to its craggy cliffs, the island is home to many species of birds and colonies including the colourful Atlantic puffins.

These beautiful sea birds come to shore every summer to breed and Iceland is a popular destination. It attracts over 60% of the entire Atlantic Puffin population. 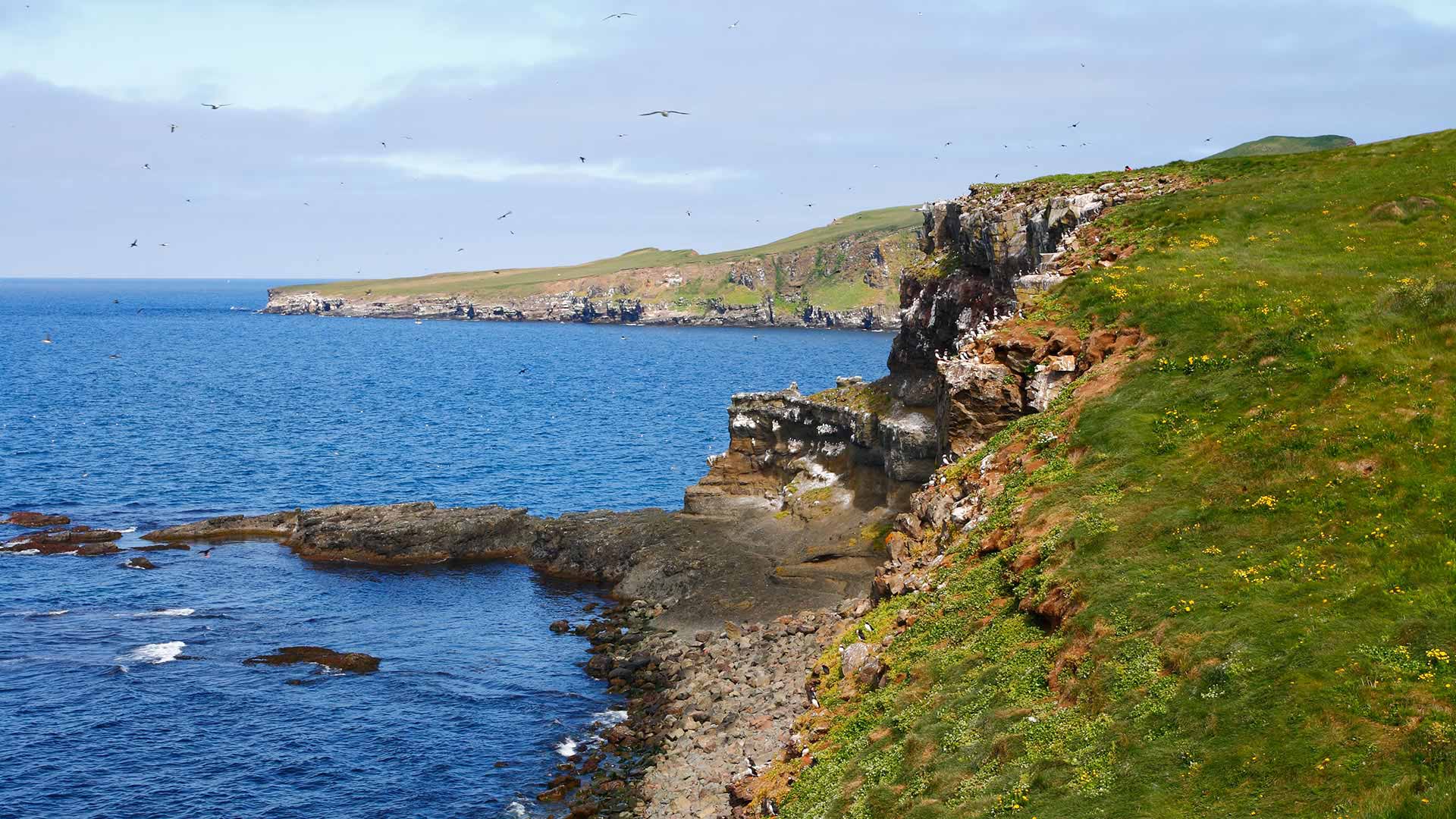 Near the summer solstice, because of its northern latitude, the sun doesn’t set here. This phenomenon called the midnight sun gives the island a unique and magical atmosphere.

At the opposite, during the winter solstice the sun will not rise inside the Arctic Circle. The polar night makes Grímsey a great location for spotting the northern lights in the dark sky.

Best way to visit: If you’re visiting North Iceland, head along to Dalvik to board the ferry to Grímsey. This port is a 40-minute drive from Akureyri, making it an ideal day trip if you’re staying here.

It takes 3 hours for the boat to reach the northern isle. There are ferries during the winter, but the waters can be choppy at this time of year. As the bay north of Akureyri is known for whale watching, look out for these gentle giants of the sea.

Vestmannaeyjar, or the Westman Islands in English, is a stunning archipelago off the south coast of Iceland. Made up of 15 islands, they were created from volcanic eruptions under the sea.

Heimaey is the only inhabited island of the archipelago. It is also the largest island of Iceland’s many isles. 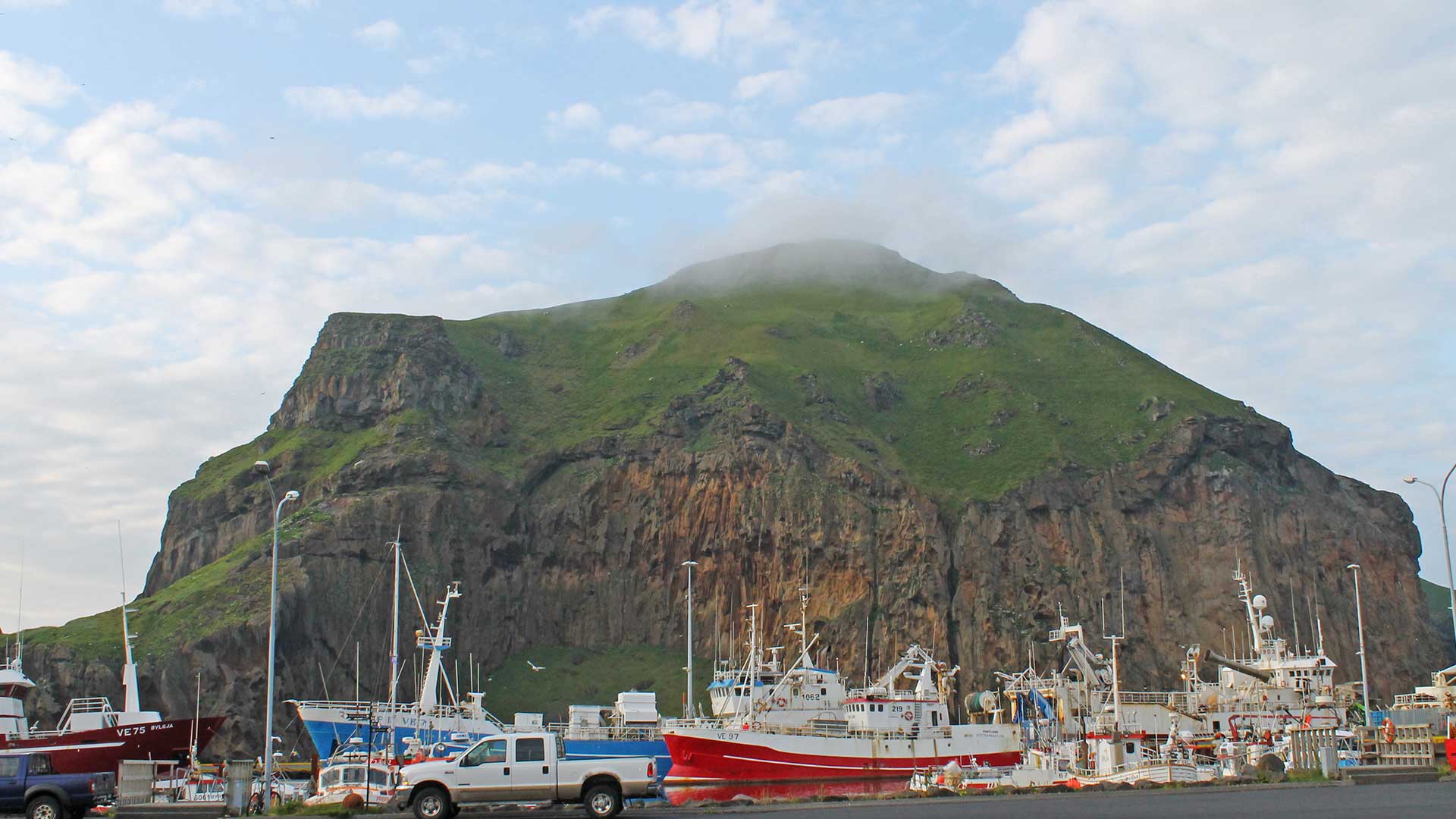 It reached international fame in 1973 after the Eldfell volcano eruption caused the population to flee their homes in the middle of the night. A third of the houses were buried in lava and ash.

You can learn more about the history of this tragic night at the Eldheimar Museum on the island.

One of the other smaller islands of the archipelago is Surtsey. It is a new island formed after the 1963 eruption that happened below sea level (the eruption lasted until 1967).

Free from human interference, it has been studied by scientists since 1964. It was inscribed as a UNESCO World Heritage Site in 2008.

The other islands, which are uninhabited, are edged by steep sea cliffs that are home to millions of sea birds. You could take a boat trip to see them from up close. Birds that nest here include puffins and kittiwakes.

If you’re interested in seeing some beluga whales during your time in Iceland, you could visit the whale sanctuary located in Vestmannaeyjar Harbour.

These islands are also known for hosting the annual Westman Islands Camping Festival (Þjóðhátíð). It is Iceland’s biggest festival attended by over 15,000 revellers each year.

Best way to visit: The Westman Islands are ideal for an off-the-beaten-path day tour from Reykjavík. Or you could detour from your road trip along the Ring Road to see these magnificent and wild islands.

We can’t mention the best islands of Iceland without mentioning the mainland of course! Iceland is itself an island located in the North Atlantic Ocean between the Americas and Europe. Did you know it is the least densely populated country in Europe? 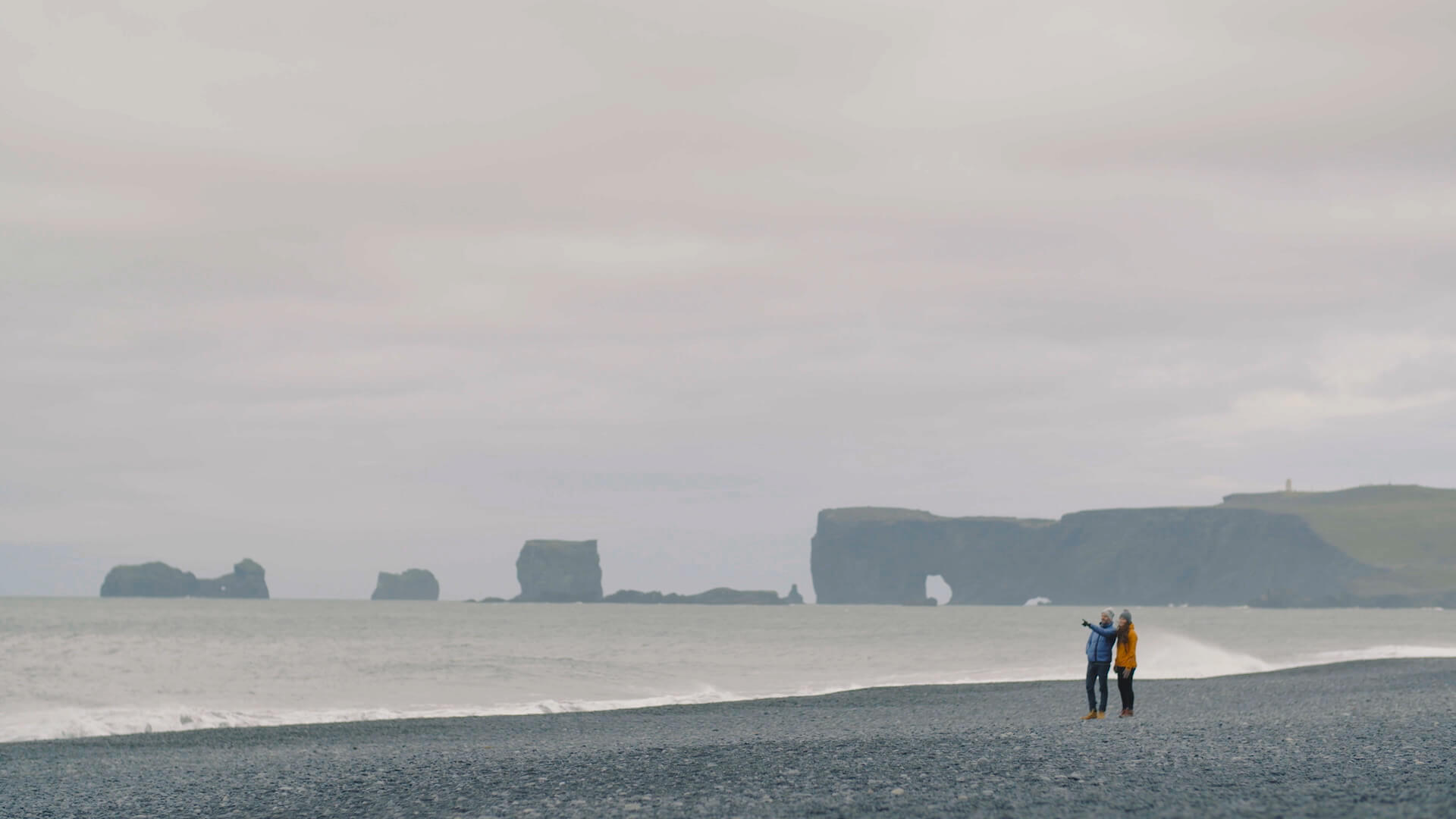 The rugged coast is dotted with beautiful fishing villages, black sand beaches, and rocky formations. In the centre, you’ll find the rugged highlands with glaciers, active volcanoes, and hot springs.

Best way to visit: Visiting the mainland can be done in a multitude of ways. You can focus on a particular region you want to discover. South Iceland and West Iceland can be paired. You could also fly to Akureyri to see the highlights of the northern coast.

With at least a week of holiday, you could drive around the whole island, following the circular Ring Road. Visit as many attractions as you want along the way. Or join a guided tour to get some insider knowledge.

As you can tell, there is much to discover off the coast of Iceland. Either on day trips or along your tour around the country. Explore as many as you fancy!

With one of our dedicated Iceland travel consultants, you can craft the ideal itinerary for yourself. Stay in stunning locations, detour to remote attractions and visit what you want to see most.

When you’re ready to start planning, get in touch. You’re in for the adventure of a lifetime.

Tags:
Blogs, Iceland, A little something about, Our Favourite, Destinations, Guides, Things to Do

My Iceland: The Other Flatey