7 Incredible Things to See and Do in Norway

Grab your wool jumper and get ready for the adventure of a lifetime. Choose a trip to Norway and you will find it quite unlike anywhere you’ve been before. Its breathtaking beauty will linger in the memory for years to come.

But where should you go? What should you see? You can't hope to pack a whole country into one trip unless you're visiting for months or more.

Read our helpful recommendations guide to uncover 7 incredible things to do and see in Norway.

Norway boasts more than 1,000 fjords, so where should you start? Well, our local experts have 3 all-time favourites for starters.

Geirangerfjord (and its waterfalls)

This Norwegian beauty was deservingly placed on the UNESCO World Heritage site list with Nærøyfjord in 2005. Geirangerfjord consistently ranks amongst the top contenders for the title of “world’s most stunning fjord”.

Here, you can gaze on tranquil waters, mighty mountains and powerful waterfalls including the famous Seven Sisters and the Bridal Veil. 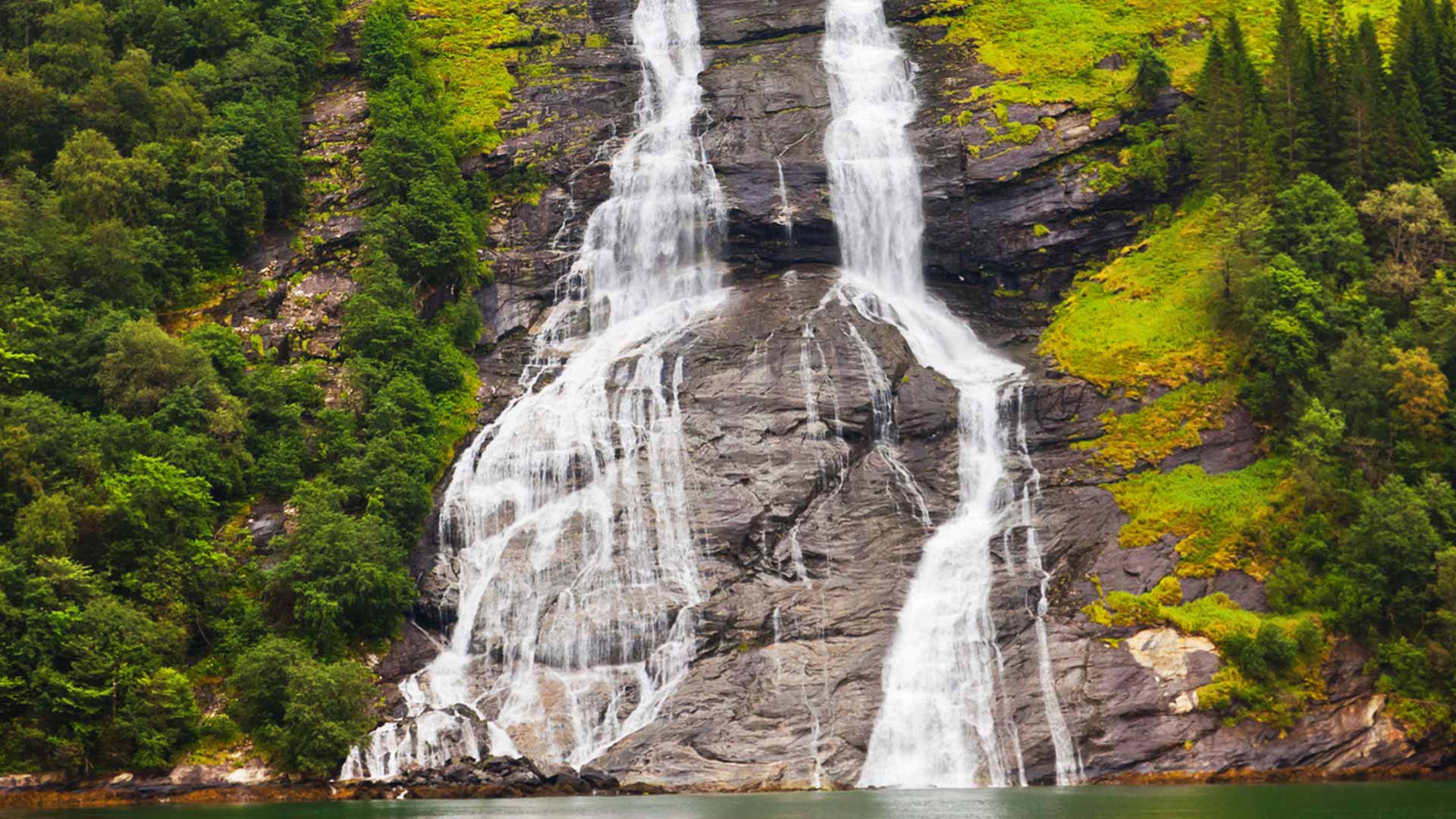 Not to be outdone by its UNESCO-inscribed cousin Geirangerfjord, Nærøyfjord serves up its own distinct charms. It earned its prestigious co-status thanks to its outstanding scenery, considered to be among the best in the world.

As one of the arms of Sognefjord, it’s easy to visit both during the same trip. Which brings me to...

Known as the 'King of the Fjords' because it's the longest and deepest fjord in Norway, Sognefjord deserves a place on any itinerary. Its dramatic scenery of steep mountains and deep blue waters make for picture-perfect views.

Sognefjord extends inland into Jotunheimen and Jostedalsbreen National Parks and is easily explored from nearby towns like Sogndal, Balestrand, Flåm and Gudvangen.

Explore Norway’s natural beauty by hitting the trail and working up a sweat as you climb mighty mountains to reach mightily photogenic sites. We promise the view from the top is worth the effort!

Also known as Pulpit Rock, Preikestolen is one of Norway’s most famous landmarks. You'll reach it after a 2-hour hike (about 10 km, a round trip of 4-5 hours), where you'll be at the summit of a 604-metre high cliff, offering sweeping views over Lysefjord below.

If you’re brave enough, you can even venture forth and look over the edge of the 'preacher’s pulpit'. 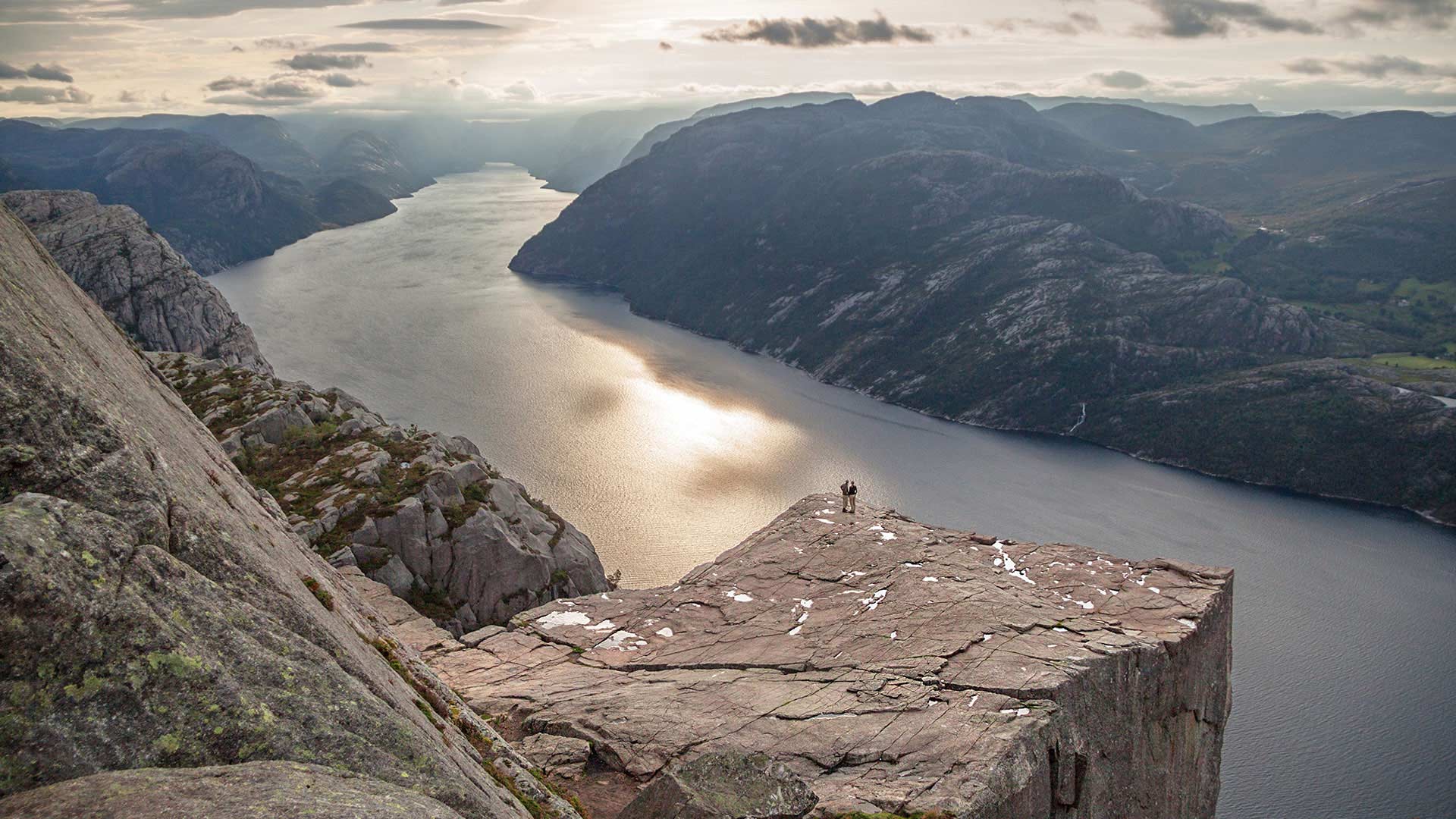 Opened by the Queen of Norway in 2017, the Loen Skylift is on of the more recent additions to Norway's many incredible viewpoints. Hop aboard the cable car here and the aerial tramway will take you 1,011 metres to the top of Mount Hoven: "from fjord to sky in 5".

From the summit you can marvel at the spectacular views of Nordfjord, take part in activities or even stop for a bite at a restaurant that overlooks the fjord. 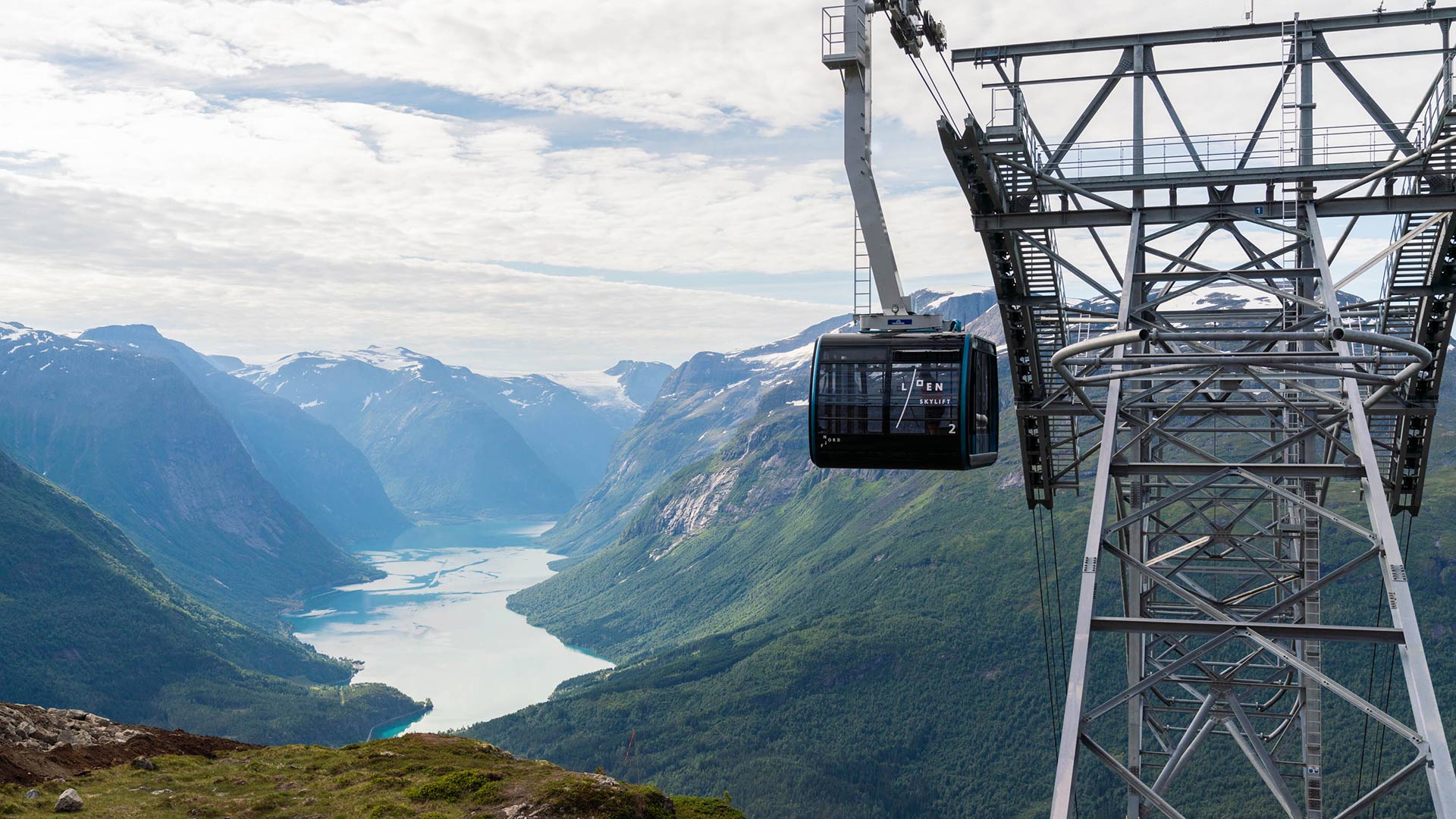 Looking for the ultimate thrill? Visit Trolltunga, a gravity-defying rock formation that juts straight out of the mountainside. The rock formation hangs, unsupported, more than 700 metres above Lake Ringedalsvatnet and provides mind-blowing views that make the 10-to-12-hour hike to get here totally worthwhile.

A road trip through Norway allows you to stop at many cultural highlights and explore some of the country’s most iconic cities. Think cosmopolitan Oslo, Lillehammer – host of the 1994 Winter Olympics –  and Bergen, home to the UNESCO World Heritage listed wharf, Bryggen.

As Norway’s capital and cultural centre, Oslo has many highlights that should feature on any itinerary.

Here you can admire the lifetime works of one of Norway’s most famous artists, the sculptor Gustav Vigeland, pay your respects to the Norwegian Royal Family at their official residence, Astrup Fearnley Royal Palace, or step back in time at the Museum of Cultural History.

While you’re in town, make sure to also visit the Viking Museum, resting place of some of the world’s best-preserved Viking ships. 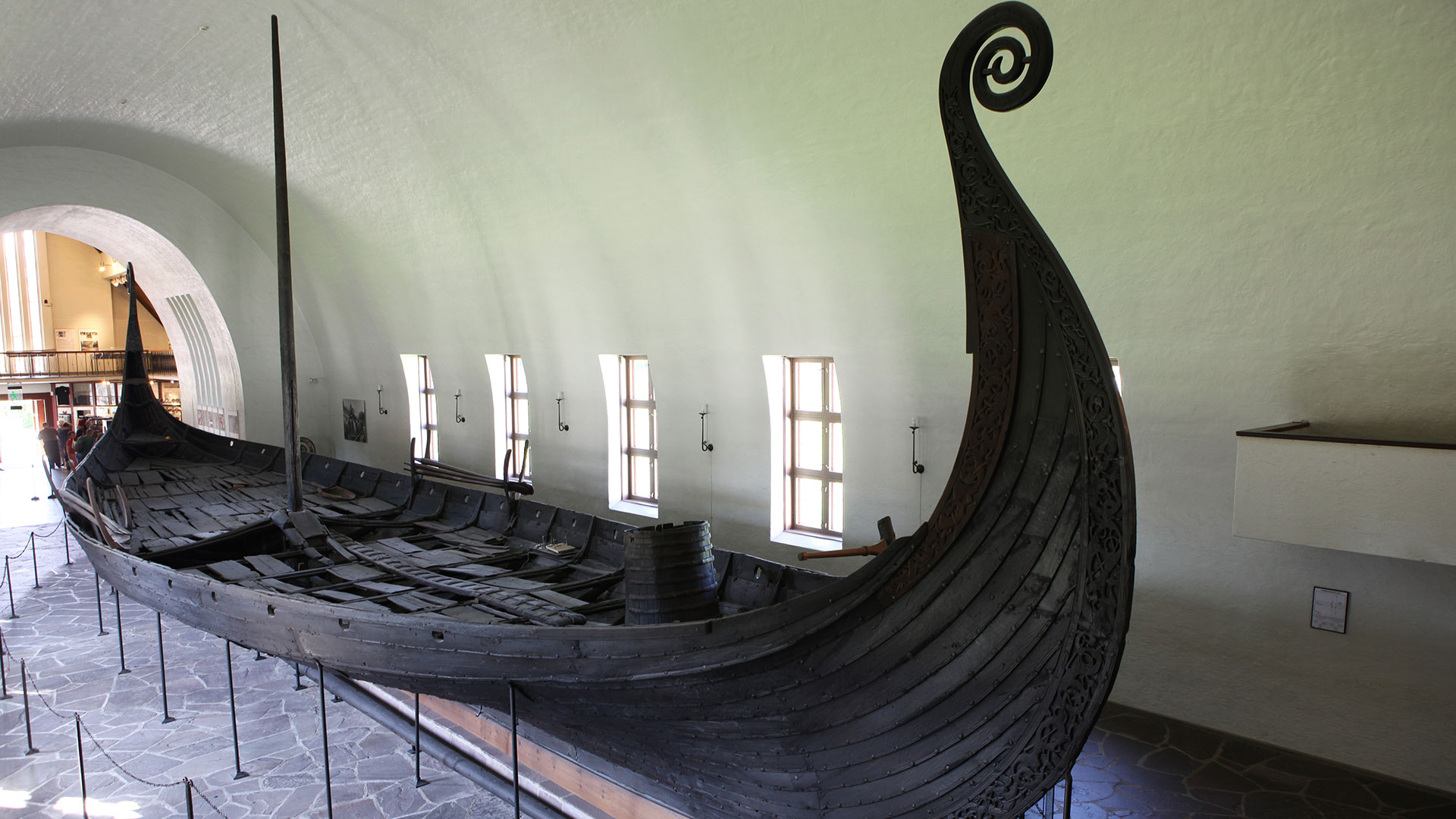 Oslo is also the perfect jumping off point for exploring the country’s natural beauty and more remote areas.

Home to the 1994 Winter Olympics, Lillehammer very much remains an outdoor sports paradise. Here, you can learn about the historic games at the Norwegian Olympic Museum or visit the Lysgaard Bakken Ski Jumping Arena, which hosted the opening and closing ceremonies.

Lillehammer has more to it than Olympic glory, though. Go exploring and you’ll also find Norway’s largest open-air museum, as well as a collection of picturesque 19th-century wooden cottages along the shores of Lake Mjøsa.

Norway's third largest city is full of life, serving you scenic viewpoints and historical points of interest aplenty. It was founded in 997 AD as a Viking trading post, and became an important Christian pilgrimage destination. Trondheim was even (briefly) the capital of Norway for a spell.

Look out for the charming-yet-trendy Bakklandet district, with its cobbled streets and cute wooden houses overlooking the Nidelven River. 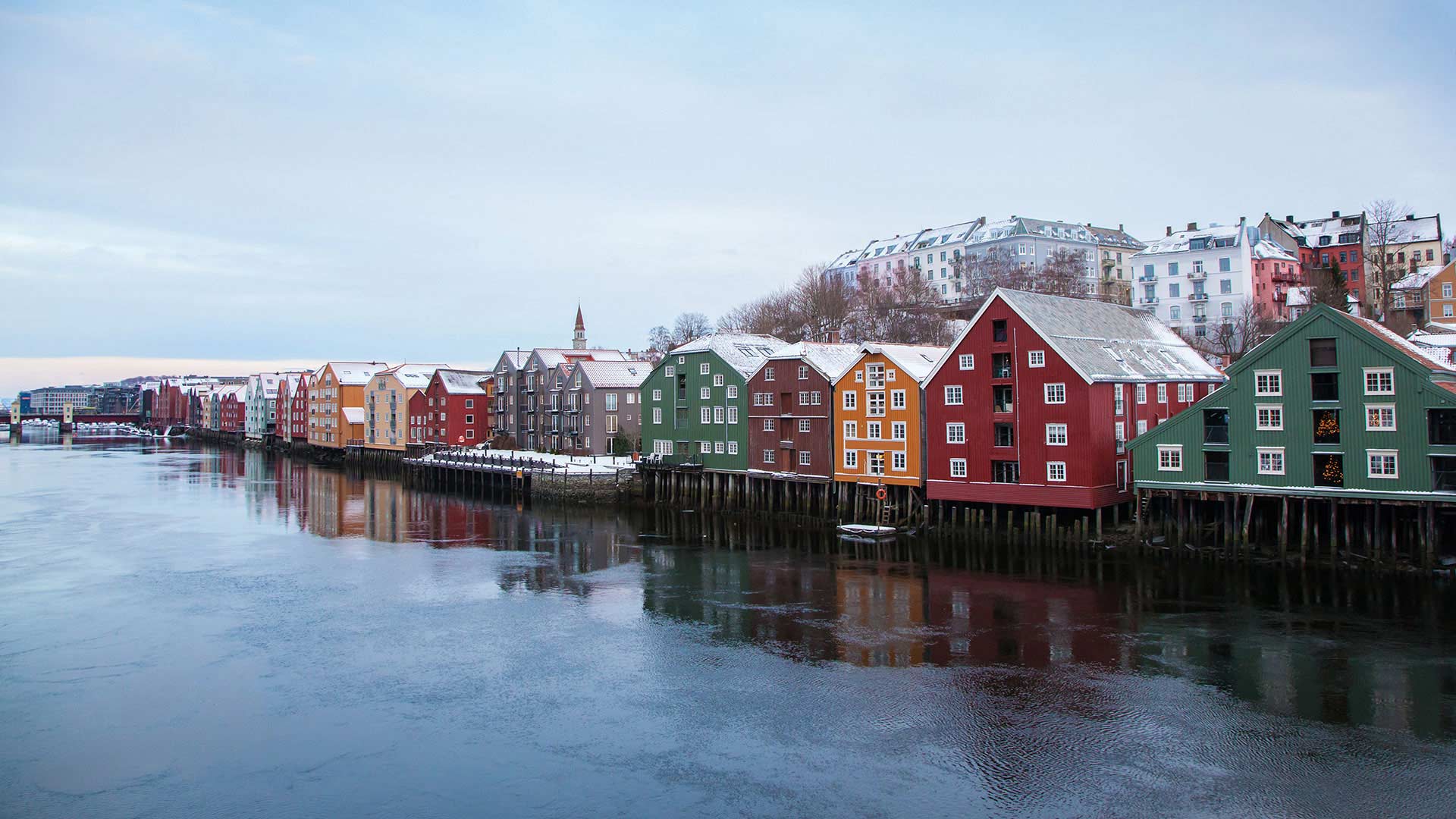 Ideally situated between Sognefjord and Hardangerfjord, Bergen is often used as a jumping off point for excursions to Norway’s fjords and coastline. But this city is much more than a convenient base for further travel.

Back in the 13th century, Bergen was Norway’s capital and was home to many Norwegian merchants. Today, the wharf area retains much of its original charm and has plenty of cultural and historical attractions to boot.

Make sure to ride the Fløibanen funicular up Mount Fløyen to get the best views over the city, a real highlight for visitors.

4. Jump aboard Norway’s railway for a train journey like no other

Norway has an extensive rail network, which makes exploring the country easy and enjoyable, even if you don’t have a car. Some of these routes offer unique glimpses at Norway’s stunning natural beauty and access to remote towns. Here are our three favourite railway journeys.

Nestled beneath towering mountains and within striking distance of powerful waterfalls, Flåm is a haven for lovers of the great outdoors. Located at the very end of the Aurlandsfjord, it is perfect for hiking and exploring historical sites like the 17th-century Flåm Church or cultural attractions like Aegir Microbrewery.

This is where the Flåm Railway (or Flåmsbana) departs from to reach Myrdal high above. Often name-dropped on VIP lists of the most beautiful train journeys in the world, this 20 km route is also one of the world's steepest railway tracks.

Retreat into Norway’s wilderness on the Dovre Railway. Running from Oslo to Trondheim via the Gudbrandsdalen valley, the Dovre Railway takes you past fjords, through mighty mountains and past gushing waterfalls.

The journey takes 7 hours and offers the option to stop off at ski resorts like Lillehammer, hiking trails in the Dovrefjell mountains, and national parks such as Jotunheimen and Rondane.

With so much to explore, you could spend weeks on this route, and many of our all-inclusive Norway tours help you do so.

Hop aboard the Rauma Railway and discover some of Norway’s most beautiful scenery. The Rauma Railway runs from Dombås to Åndalsnes and covers the relatively short distance of only 70 miles. Nonetheless, the 1-hour ride takes you past dramatic fjords, through thick wild forests and past mighty mountains.

Harry Potter fans will especially enjoy this journey as parts of Harry Potter and the Half-Blood Prince were shot along this route.

5. Venture into the remote regions of the Arctic Circle

Visiting the northern regions of Norway is an essential part of any trip for Nordic explorers. Get ready to come face-to-face with polar bears, chase the northern lights and experience Viking culture at its finest.

Setting sail to the Arctic Circle allows you to admire the beauty of Norway’s rugged coastline from an entirely new angle. On the way, you can admire towering glaciers, iconic fjords and meet a variety of wildlife, such as humpback and minke whales, walruses, puffins and polar bears.

Cruising through Norway’s Arctic Circle is one unforgettable and epic way to experience the country.

Voyage north to Tromsø and discover a city bustling with culture, history and direct access to the great outdoors.

Known as the “Gateway to the Arctic”, Tromsø is a natural stopping point on any journey to the Norwegian Arctic Circle. Sample a glass of akvavit in a local tavern, ride the Fjellheisen cable car for stunning views, or try to spot the northern lights during the winter time. 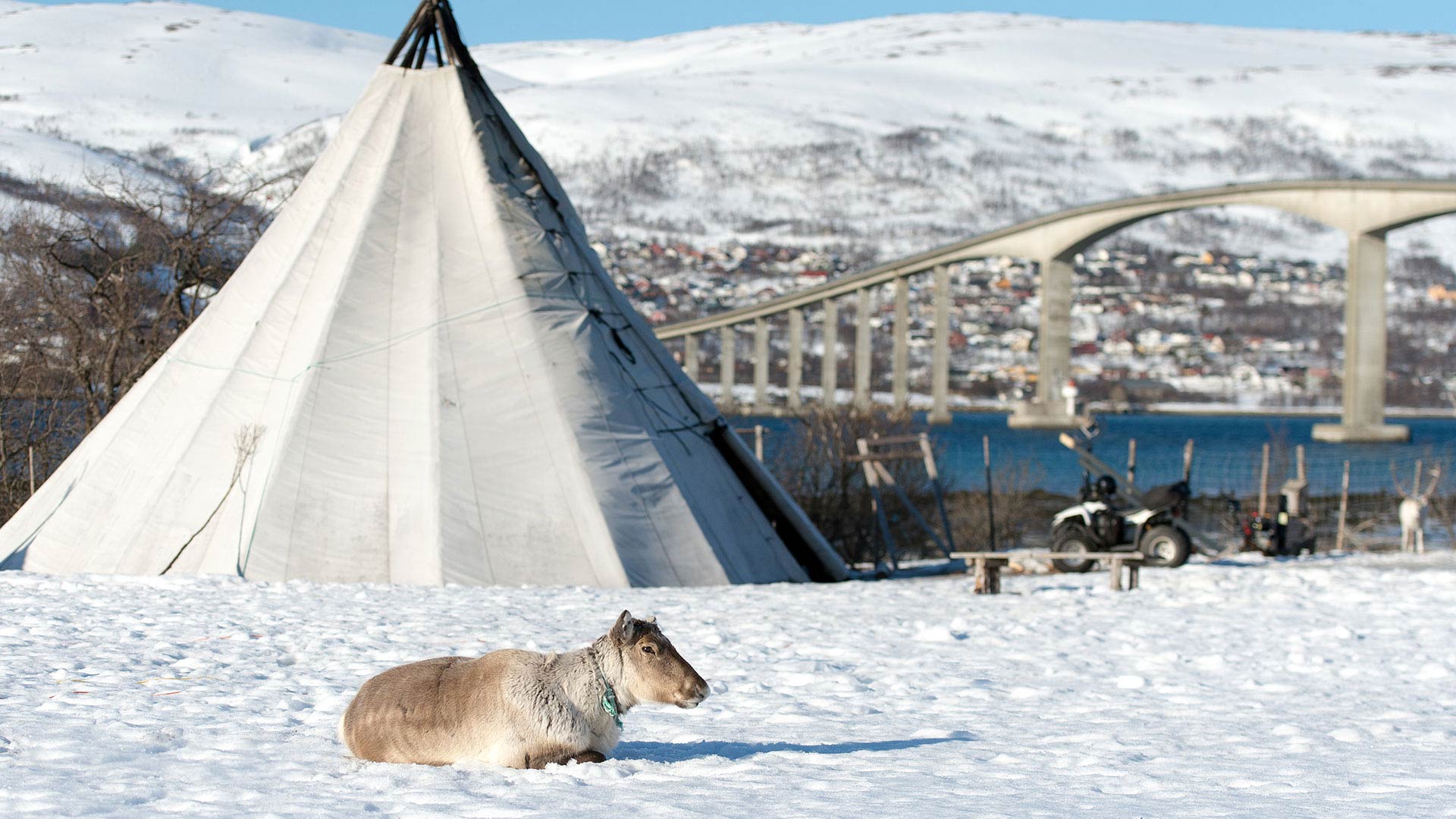 Set at the heart of Norway’s “aurora zone”, Tromsø is proudly recognised as one of the best places in the world to see the northern lights.

Located above the Arctic Circle, the Lofoten Islands are an archipelago offering renowned natural beauty, rustic fishing villages and a unique glimpse into Norway’s past. Historically, this area was a Viking stronghold and today it retains a rich culture centred around the sea and fishing.

Make sure to visit towns like Svolvær, with its art galleries and cafés, as well as spots of natural beauty like “Svolvær Goat” (Svolværgeita). Or, take to the seas where you might spot wildlife including mischievous otters and playful orcas.

The Lofoten Islands are also an ideal place to experience a world where the sun never sets. Or never rises, depending on when you visit!

As home to nearly 1,000 polar bears, Svalbard is the place to try and catch a site of these majestic locals characters. Located halfway between Norway and the North Pole, Svalbard lets you encounter graceful glaciers, tranquil seas and vast snow-covered plains.

Take a cruise along this frozen coastline. You can watch polar bears hunt for seals in their natural habitat, spot humpback whales as they surface for air, or admire the quick movements of arctic foxes.

6. Watch the northern lights dance across the sky

Norway has always held a fascination with the northern lights, aka the aurora borealis. One of Norway's more visionary scientists, Kristian Birkeland, had an unhealthy obsession with the phenomenon.

And in the more distant past, Norse mythology held that the northern lights were reflections of the weapons and armour of the Valkyries, casting a strange flickering light across the land.

Today, people from across the world travel to Norway to do a spot of aurora hunting.

Get ready to have your mind blown as you watch the northern lights dance across the dark sky with their vibrant, heavenly shades of green, pink and violet. If you’re lucky, you may be able to cross this off your bucket list.

If you want to see the northern lights, make sure to plan your visit between October and late March as during the winter months Norway has less daylight and longer hours of darkness. Longer nights mean that you’ll have a greater chance of witnessing this spectacular, all-natural light show.

During the summer months, Northern Norway experiences the Nordic phenomenon known as the ‘midnight sun’. The northern region have such a high latitude that the sun never sets completely, which means you can enjoy the outdoors almost all day.

Take to the waters on our self-guided midnight sun cruise. You’ll explore Norway’s most northerly region, including the startlingly beautiful Lofoten Islands, and travel along rugged coastline to the North Cape and the village of Kirkenes. You could even join a king crab safari, experience Norway’s fjords, and much more.

NORWAY IN A NUTSHELL® - CLASSIC

Norway in Focus: The UNESCO-listed Nærøyfjord

Hiking the Pulpit Rock in Norway