Best Things to Do in Iceland on Your Private Tour

Home to volcanoes and icebergs, elves (allegedly) and Vikings, waterfalls and geysers, lagoons and rainbows, Iceland promises a singular kind of magic for a private tour. Set at the edge of the Arctic Circle, on one of the world’s most active volcanic areas, the land of fire and ice is a place like no other.

If you want to discover all the best things to do in Iceland – soaking your bones in the Blue Lagoon, whale watching off Reykjavik, trekking across lava fields, strolling along ice strewn beaches, or being awed by the northern lights – we’ve got a pretty definitive list for you.

One of the best ways to get to know a country is by driving it, and Iceland happens to be encircled by a route called the Ring Road, which takes you past a whole host of celebrated attractions.

Going on a privately-led tour of the Ring Road will give you a comprehensive overview of the island, where you’ll be able to experience the surreal landscapes of the glacier lagoon, the moon-like terrain of the Lake Mývatn area, and the most magical waterfalls in Iceland.

And all while someone else does the driving!

What are the highlights on a private tour of the Ring Road?

Reykjavik: Iceland's beloved capital city is where you’ll depart from any tour along the Ring Road, and a little time here means you can shop and dine down trendy Laugavegur, or explore the nation’s most vaunted galleries and museums. This is also a good launching point for some whale watching tours.

The Blue Lagoon: Situated just under an hour from Reykjavik, the Blue Lagoon is a place where you can (almost literally) dive into Iceland’s geothermal landscape. You can even visit shortly after hopping off the plane if you fancy it. 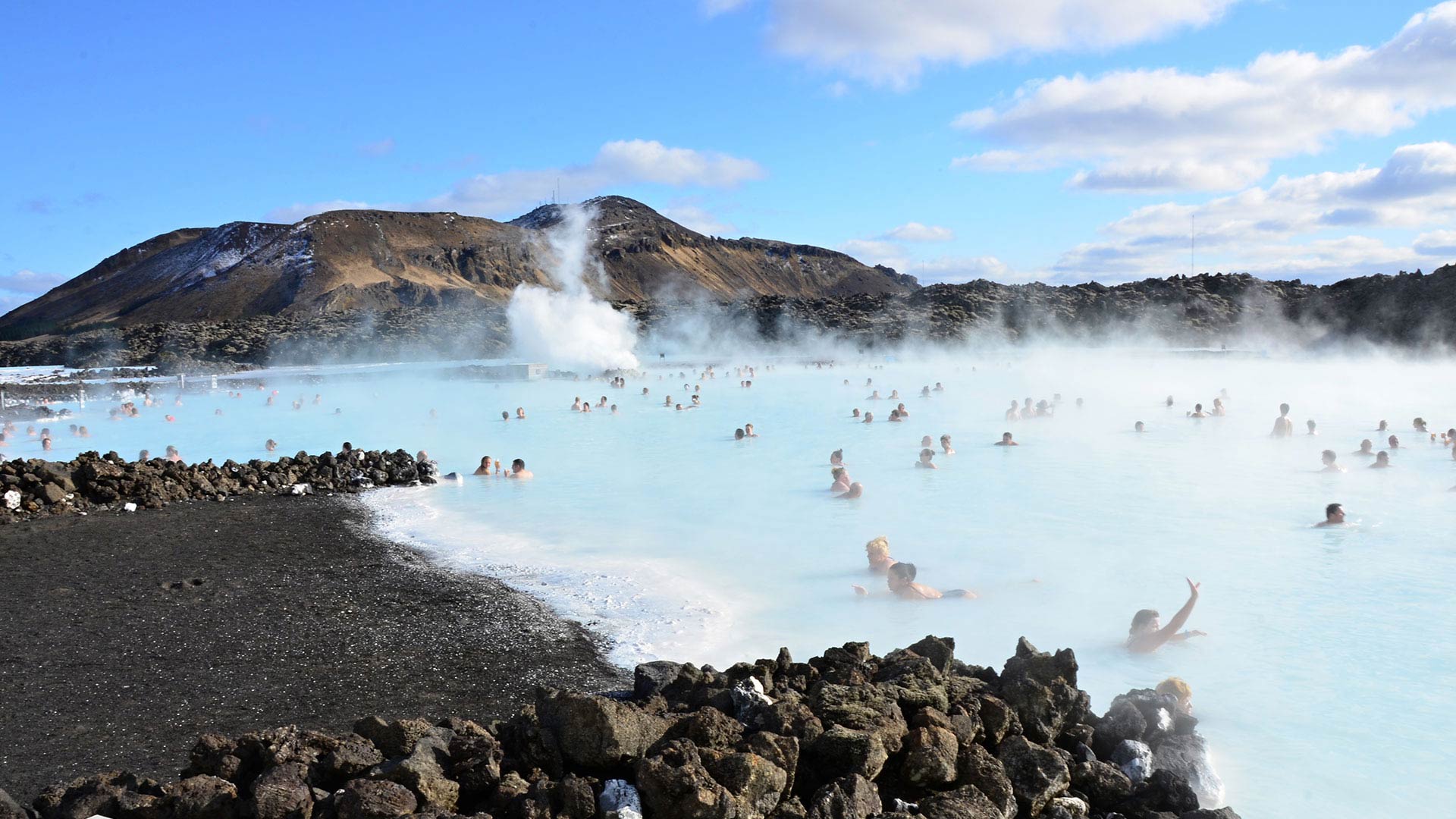 The Golden Circle: Set in the southwest of the island, again only a short distance from the capital, you’ll find the iconic Golden Circle. Headline acts include the many tiered waterfall Gullfoss, the UNESCO-listed Þingvellir National Park, and the explosive fun of Geysir hot spring area.

Waterfalls: You have so, so many waterfalls to see in Iceland, on top of the Golden Circle's impressive Gullfoss. My favourite to date is the world-famous Seljalandsfoss – the one you can walk behind. But there's also Skógafoss just along the south coast, and many more beside.

There's a strong chance you will be forever-ruined for waterfalls after going to Iceland.

Rugged coastline: From the black sand beaches right by Vík í Mýrdal, to the steep cliffs and basalt columns of Reynisdrangar, the dramatic shores of the east are a photographer’s dream.

Icebergs ahoy: On the Ring Road you can see the stunning Jökulsárlón glacier lagoon, where floating icebergs slide by, and then visit Diamond Beach, where glittering icy monoliths litter the shore. 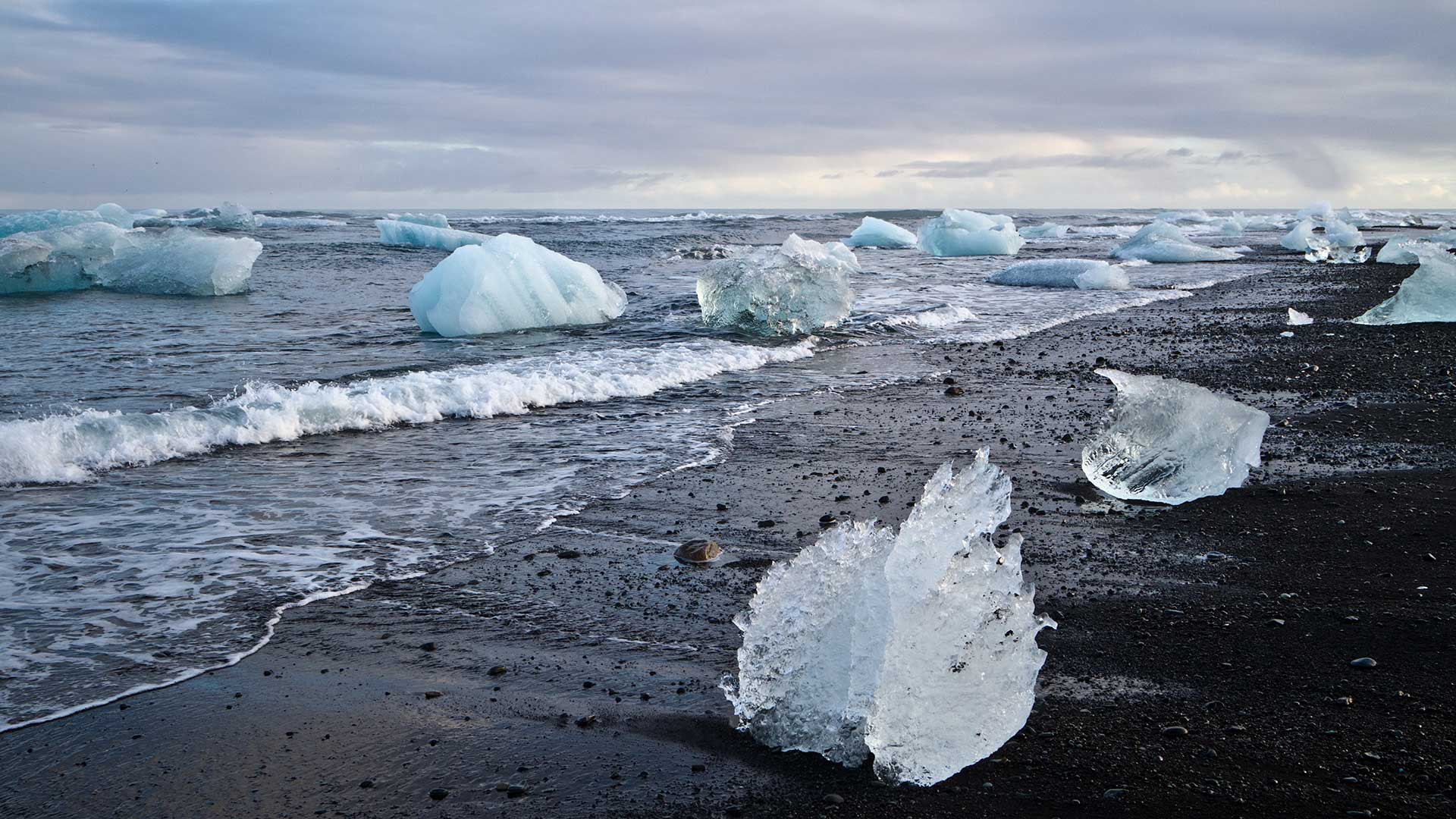 Akureyri: Known in Iceland as the ‘Capital of the North’ you can explore this town with a local expert, who will lead you through the history and sites of this lovely harbourside community.

Horse riding: Skagafjörður is known as the “Mecca of the Icelandic Horse”, where you can ride through the remarkable landscape on these hardy and friendly horses. 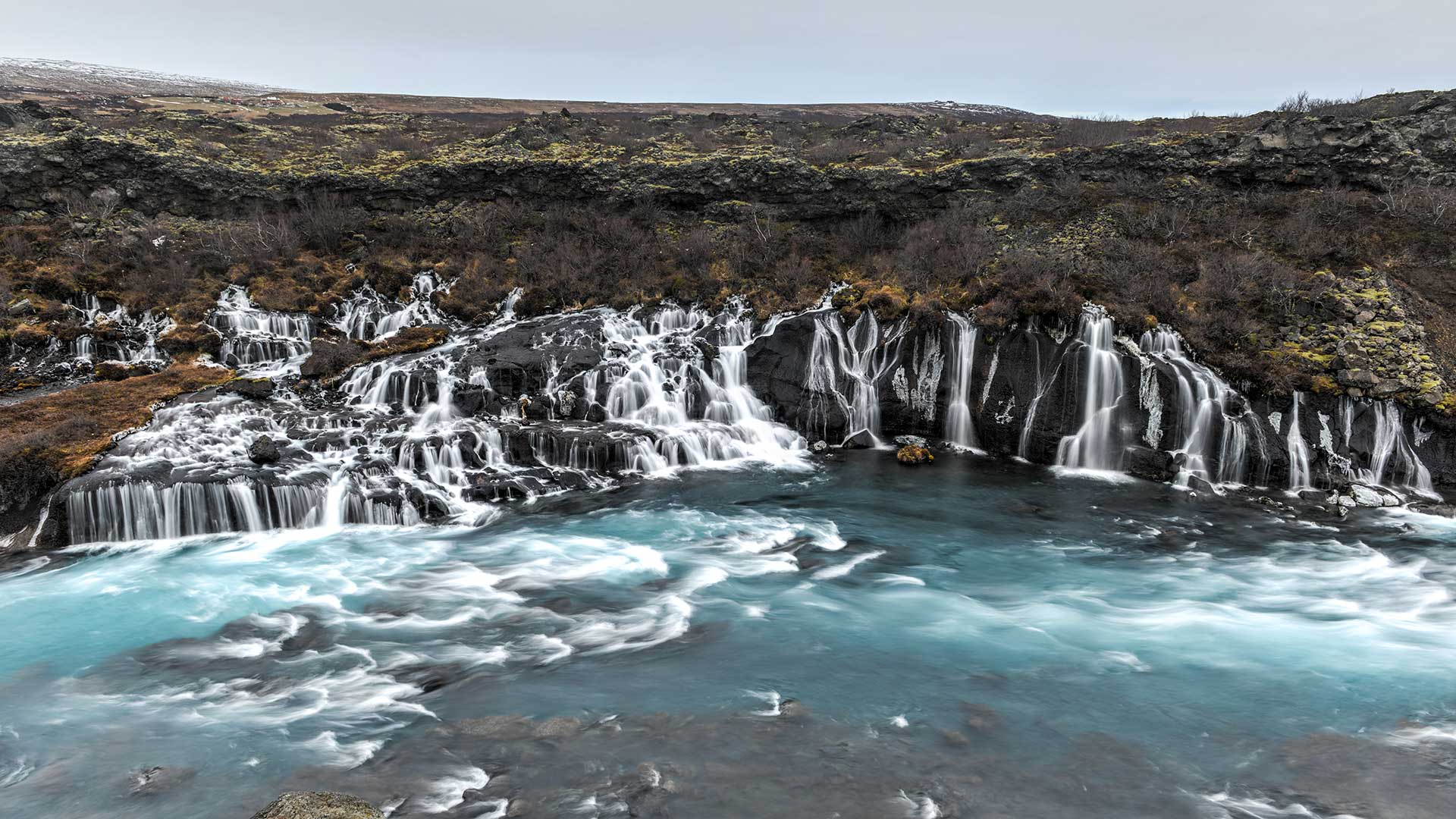 2. Find adventure in the Golden Circle

Spend time exploring the Alþing and Silfra to understand how this site has come to be such a huge part of the Icelandic identity.

What are the highlights of a private tour in the Golden Circle?

Þingvellir National Park: This UNESCO-listed park, just a short journey east of Reykjavik, is home to the Alþing. For 800 years this location served as the site of Iceland’s parliament.

Gullfoss: The thundering might of the ‘Golden Falls’ has made Gullfoss one of Iceland’s most iconic attractions.

Geysir: Explore Iceland’s Geysir geothermal region, filled with hot springs thanks to the area’s alignment with the tectonic plates that shift below the earth’s crust. Then make time for its namesake, Geysir, one of the most powerful blowholes in Europe.

Kerið: Go to Kerið, a beautiful blue lake set in the caldera of a volcano that erupted roughly 3000 years ago.

Silfra: Dive or snorkel between two tectonic plates, in glacial water so clear that underwater visibility stretches to 100m!

3. Get to know Iceland’s Highlands

Did you know Iceland has its own highlands? In the more rugged (and less travelled) countryside of the west, you will find soaring mountains, dramatic fjords, mirrored inlets, and magnificent coastline.

For travellers wanting to really get off the beaten track, there are 4x4 private tours out to Iceland’s western side, where you can see attractions like

Hraunfossar, Langjökull glacier, and Hekla. This is an ideal trip in the summer, where you can make the most of your days under the eye of Iceland’s midnight sun.

What are some highlights in Iceland’s highlands?

Langjökull glacier: On the highland passes, and into the Kaldidalur valley, you’ll come across the Langjökull glacier. If you’re feeling game, there are ice caves and man-made ice tunnels within the glacier that you can explore.

Hraunfossar and Barnafoss: These unique waterfalls are fed by subterranean channels, making it seem as though the water springs from nothing, an absolute must-see.

Deildartunguhver: This is the most active hot spring in Europe, and a great place to see the geothermal activity up close.

Þjórsárdalur valley: Adventure into ‘no man’s land’, and explore the ethereal lava fields of the Þjórsárdalur valley. Once prosperous farmland, the mighty Hekla volcano saw the landscape dramatically reformed in 1104.

Landmannalaugar: You may have seen the most active hot spring, but have you bathed in one? In the Landmannalaugar area, you can do just that – try the nature baths and hot pools for a perfect panacea after a day of hitting the hiking trails.

Hekla: If you want to see the source of all the volcanic activity that has shaped so much of Iceland’s landscape, go to Hekla, where in days gone by, it was thought to be the gateway to hell.

Reykholt: Culture vultures will also be keen pop a day trip to Reykholt on the itinerary, as this place was once the home of the 13th century saga writer, Snorri Sturluson.

If you’ve come for the ice and fire in Iceland, the south is where you’ll find it. Icebergs languidly float off the coast, only to find their polished and glittering remains on volcanic black-sand beaches.

A private tour in the south incorporates the Golden Circle too, allowing you do experience treks across glaciers, diving between tectonic plates, bird watching off a coastline made up of dizzying cliffs, and staying in charming villages that carve their living out of the sea.

What are some highlights in Iceland’s South?

Seljalandsfoss and Skógafoss: See these legendary waterfalls, with Seljalandsfoss dropping 65m (and offers you the chance to glimpse behind the waterfall) and the mighty Skógafoss, with a width of 25m. 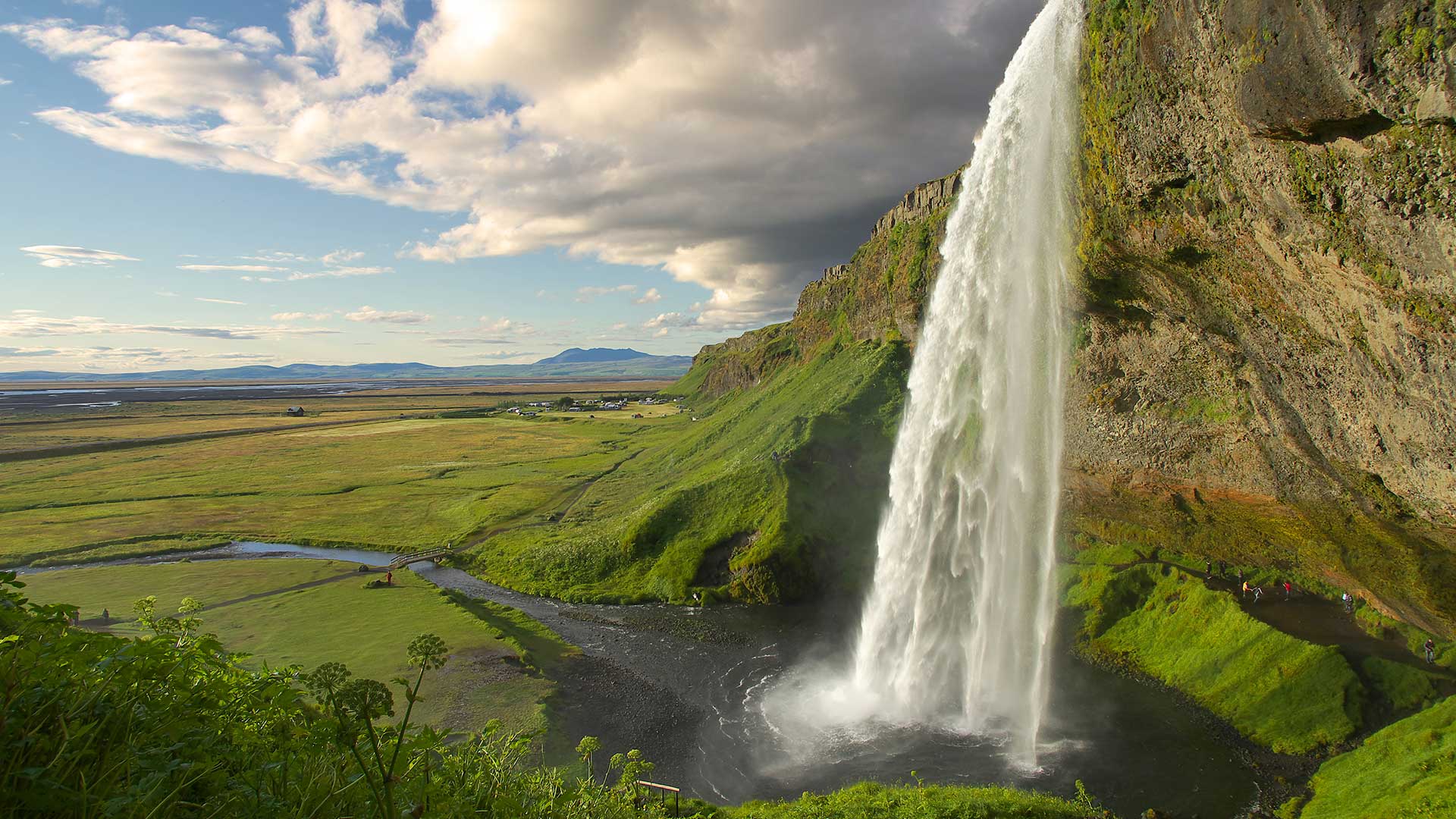 Vik: Visit the seaside village of Vik, where you can duck into small restaurants and local taverns for a slice of real Icelandic life. This is a great spot to look out for cute puffins too!

Reynisfjara beach: Right next to Vik you’ll find Reynisfjara beach, whose volcanic black sands frame huge basalt columns that will remind you of the Giant’s Causeway in Northern Ireland. 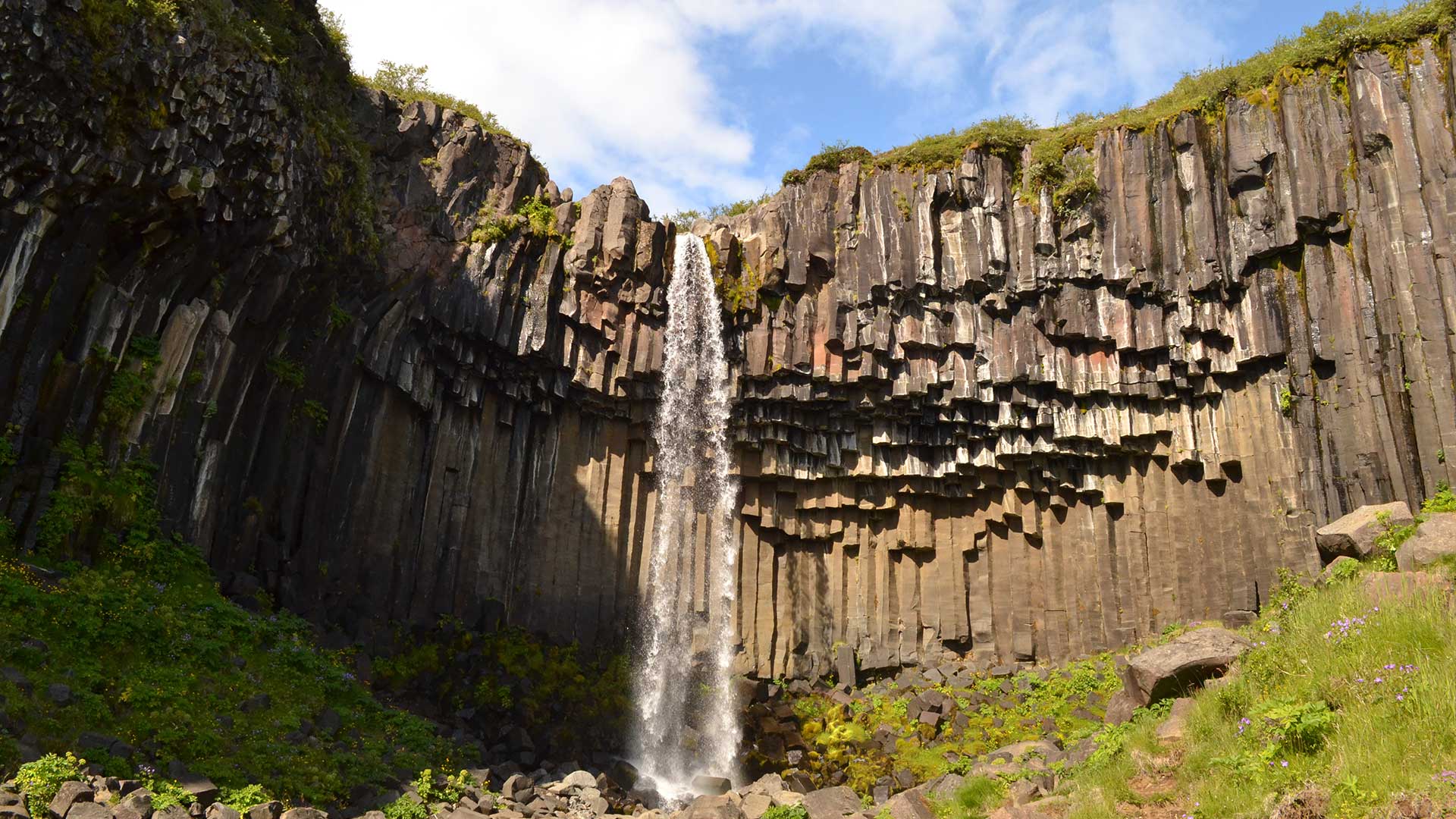 Vatnajökull National Park: Glacier hike from Skaftafell, sail the still waters of Jökulsárlón and see giant icebergs, and marvel at the highest peak in Iceland: Hvannadalshnúkur.

Iceland is one of the premier places in the world to search out the northern lights. If this is a bucket list item you’ve yet to cross off, you could have just found the way to do it.

Private tours geared towards seeing the northern lights will take you to more remote areas where there is no light pollution, so you can see the full might of the aurora borealis.

What are some highlights on a northern lights private tour in Iceland?

Eyjafjallajökull volcano and Gígjökull glacier: Be driven down this limited-access mountain road and experience the truly rugged terrain of Iceland, where you will ford glacial rivers, and the mountain passes.

Húsadalur: Rest up in the mountain huts of Húsadalur, where the views are spectacular and the saunas are soothing (especially once you’ve spent an afternoon hiking). Best of all, the height and the clarity of the sky is perfect for seeing the northern lights.

Seljalandsfoss: Step behind a curtain of cascading waters of Seljalandsfoss, a childhood dream come true, and where you can see another natural phenomena of light: rainbows.

6. Go on a luxury retreat to Iceland

Iceland may be known for being rugged, but that doesn’t mean you need to rough it on holiday in order to experience the best this country has to offer. In fact, if anything, embracing a little luxury will afford you some of the most unique adventures in the land of fire and ice.

What are some highlights on a luxury private tour of Iceland?

Snowmobiling on Langjökull glacier: Explore this glacier with a unique form of Icelandic travel: on a snowmobile. An experienced guide takes you on a tour on this river of ice for an unforgettable day of sightseeing.

Blue Lagoon: Sure, it’s easy to add on to any itinerary, but a luxury retreat to the Blue Lagoon gives you a chance to make the most of the spa and the lagoon. Blend great views and relaxation with this attraction.

Glacier Lagoon: Hop on a boat at the Glacier Lagoon, and watch the world, and enormous icebergs float by. Then, see where they end up by strolling on Diamond Beach, so-called because of the sparkling ice shards that stud the black sands.

Gljúfrabúi: Known as the ‘hidden waterfall’ the enchanting waters of the Gljúfurá river fall into an obscured canyon, and finding its hiding place is one of the most rewarding activities on this private tour.

Eyjafjallajökull: Be awed by the majestic volcano, Eyjafjallajökull, source of the infamous 2010 eruption, a fantastic photo opportunity for budding photographers.

And of course, Reykjavik: Beyond the capital’s popular restaurants, shops, galleries, and museums, is a full catalogue of cool things you can do here. See the iconic Sun Voyager sculpture, stroll the old harbour area, and duck into the impressive Hallgrímskirkja church before you depart.

Want to learn more about the private tours on offer in Iceland? We’re happy to help advise you on which tour and itinerary would best suit the kind of adventure you’re after.

THE NATURAL WONDERS OF ICELAND - PRIVATE

10 Reasons why Iceland is the Perfect Instagram Honeymoon Destination

7 Volcanic Experiences to Have in Iceland

7 Ways to Experience Glaciers in Iceland